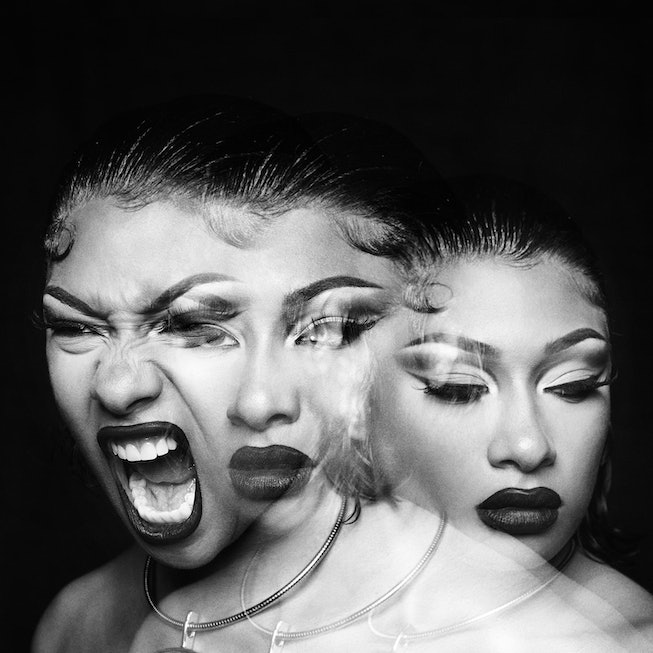 Megan Thee Stallion’s Traumazine has arrived. Two years on from her celebratory debut album, Good News, the “Thot Shit” rapper has gone through some of the most trying times of her life. Arriving on the heels of a messy and public battle with Tory Lanez, and in the midst of the rapper’s own legal dispute with her label, 1501 Entertainment, her long-awaited sophomore album takes on a decidedly darker tone than her previous record. But if there’s anything the 18-track project also makes clear it’s that the rapper is also at the top of her game.

From house to pop to pure no-frills rap, Traumazine is Megan Thee Stallion’s most versatile output yet. Ever since her come-up with “Big Ole Freak,” the rapper has been unafraid to stretch her skills to fit a variety of contexts, but on Traumazine she masters the ability. On “Her,” she goes haywire over a boosted house beat; on “Star” she taps into R&B and her feelings; on “Not Nice” she is at the apex of her skill as an emcee. There’s a song for every mood on Traumazine, and a different shade of Megan to go along with it.

Notably, the album will be her last on 1501 Entertainment, the label she’s suing for allegedly not paying her ever “in her life,” and potentially sabotaging the rollout of her latest album. Still, Traumazine is one of the rapper’s sharpest projects — a masterclass on the coveted skill of versatility. Below, we pick the best songs from the album, from “Not Nice” to “Star.”

On “Not Nice,” Megan states her independence plainly from the very first line. “I'm on my f*ck you sh*t,” she declares, letting everyone know that despite all that she’s been put through, she knows exactly who she is and is not one to be messed with. —Claire Valentine, Entertainment Editor

When artists say they’ve made their most vulnerable album ever, it’s often hit or miss. On “Anxiety,” Megan follows through on the expectations of a record titled Traumazine by actually sharing her most revealing songwriting yet. The basic premise of the track is about how bad b*tches can still have bad days, but it’s on the second verse, when Thee Stallion addresses her mother, where the song taps into the real and tender core of the rapper. “If I could write a letter to Heaven/ I would tell my mama that I shoulda been listenin'/ And I would tell her sorry that I really been wildin'/ And ask her to forgive me, 'cause I really been tryin',” she heartbreakingly raps. Abruptly, the drama, news headlines, and tabloid gossip of the last few years are put into stark perspective. In the wake of “Anxiety” they feel wholly insignificant. —SW

Perhaps the second most conventionally radio friendly song on Traumazine — after “Sweetest Pie” — is “Star” with R&B powerhouse Lucky Daye, who can’t make a bad song. Luckily, Megan can’t either, and together they team up to deliver a laidback bop that would probably get elevated tenfold if blasted while cruising down Mulholland Drive at sunset. Yes, it’s one of those songs, so go grab the keys. —SW