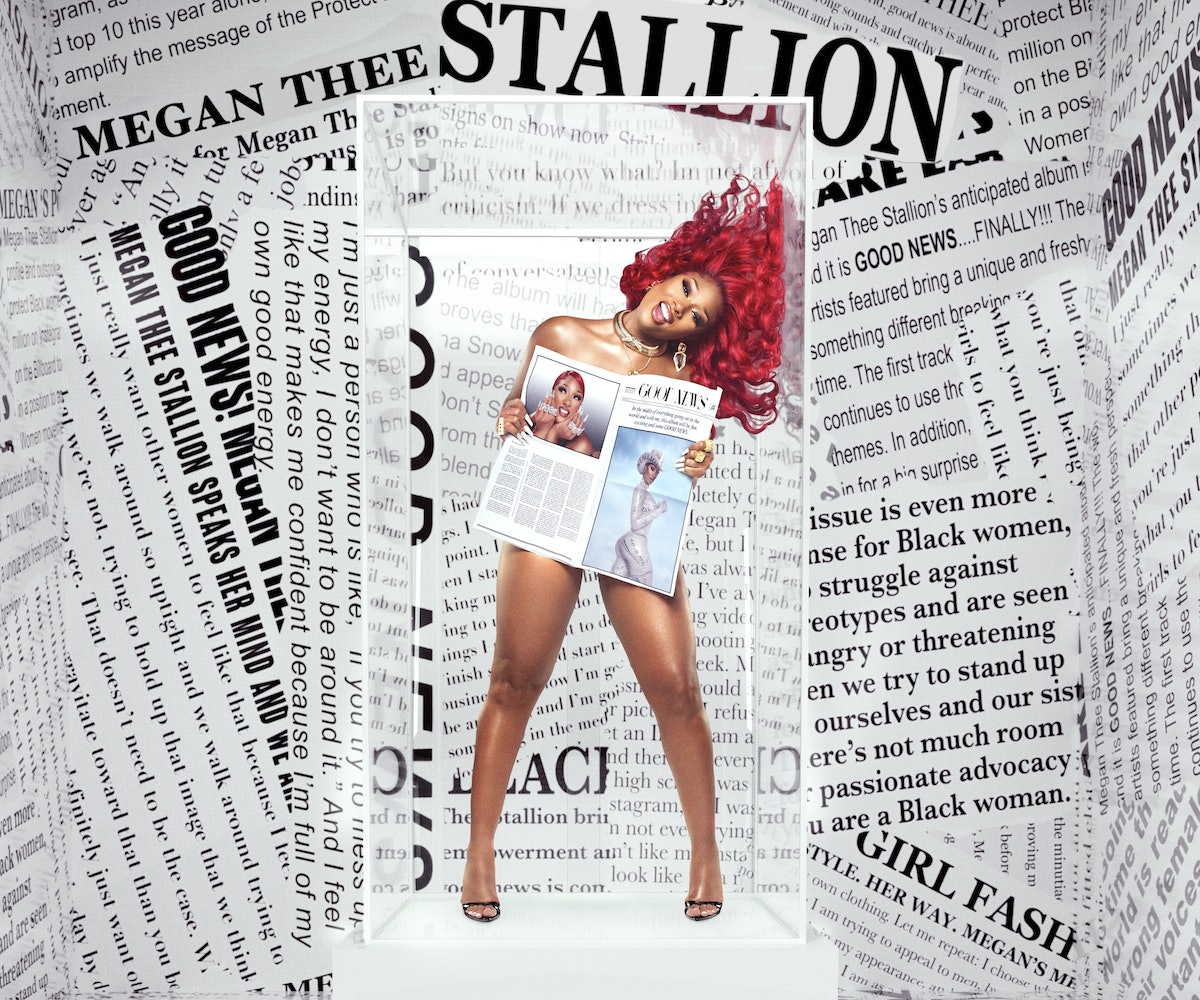 It's been a long time coming, but Megan Thee Stallion has finally released her excellent studio debut, Good News. And let's face it — 2020 could use all of that it can get.

While it hasn't all been calm seas and smooth sailing for the Hot Girl rapper this year — her highly publicized and speculated on saga with Tory Lanez proved how contentious being at the top of the rap totem pole can still be — the young Houstonian nonetheless experienced some massive, well-earned highs. There was "WAP," her juicy and inescapable joint feature with Cardi B, which was literally the talk of the entire country at one point; her first ascent to the top of the Billboard 100, thanks to a helping hand from Beyoncé for the "Savage" remix; and even a cogent New York Times Op-Ed thrown in the mix. All other signs have pointed that she's at the top of her career — and Good News proves that from here, she can go anywhere else she'd like.

From rapid-fire freestyles and old school hip-hop to balmy dancehall and even sparkling, capital P Pop, the 17 tracks on Good News prove that Miss Stallion is no one-trick pony, and that she can excel at whatever melody, genre, or sound she puts her bars to. Below, five excellent tracks from the record that deserve your attention, and show off her curious versatility.

Unlike Tory Lanez, Megan Thee Stallion doesn't have all day (or all album) to dwell on private, legal affairs. So every morsel of testimony she serves on "Shots Fired" — her direct and only response to the whole incident on the album — is sharp, succinct, and focused on the point. Over a ringing, stark beat, Megan's storytelling ability, clear-eyed delivery, and general charisma as a rapper as she tells her side of the story take center stage, even as the content of what she's saying falls back to the wayside. After all, does it really matter what you say if you don't know how to say it (i.e. Lanez' rambling and exhausting Daystar)? The points moot now anyways as Megan's got the last word: "Imagine me entertaining you fuckin' goofy-ass n*ggas and you fuckin' goofy-ass b*tches." —Steffanee Wang

My mind flashes back a good decade once “Circles” starts to play, thanks to a sample from Jazmine Sullivan’s “Holding You Down (Goin’ in Circles).” While Sullivan’s original version is a sad song about not being able to let go of someone who keeps doing her wrong, Megan refuses to go that route. Instead, she flips the track into one of her signature bad b*tch anthems, making you forget about “goin' back and forth with the lil' boys” and realizing your true worth. —Maria Bobila

New Orleans bounce, Miami raunch, and Megan Thee Stallion's confident H-Town energy coalesce on this full-throttle bop about bussin' it open and often. The Juicy J-produced standout features a beautiful (and, let's be honest, toxic) hook courtesy of SZA, along with a throwback-inducing sample of Adina Howard's equally promiscuous "Freak Like Me." Wrap all that up with some classically wild bars from Thee Stallion herself — "Freaky bitch, I do this, suck it like I'm toothless" — and you have yourself a classic. —SW

"Body" is a crisp three minutes of bouncy beats and self-confident lyrics expounding on the beauty of a curvy bawdy-awdy-awdy. This song embodies Meg's no-f*cks-given attitude in the best way, on a song that will surely soundtrack endless (socially-distanced) spin classes and dance parties, even in quarantine. By releasing the video — featuring Black female icons like Taraji P. Henson, Blac Chyna, and Jordyn Woods — the same day as Good News, Megan doubled down on her message to the world: this body is deserving of nothing less than celebration, admiration and respect. —Claire Valentine

"Don't Rock Me To Sleep"