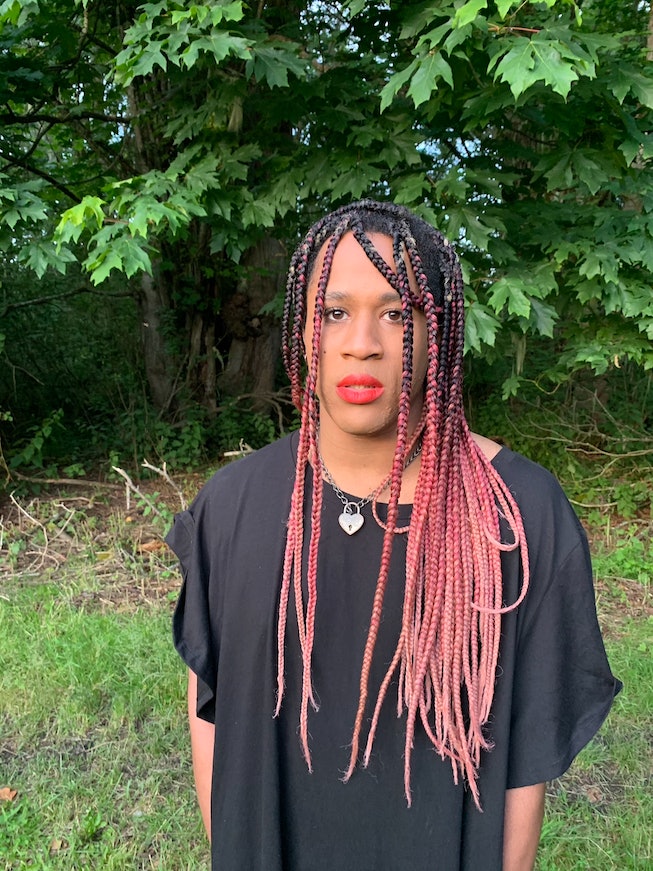 New York-based pop artist Michael Love Michael has never fit into any one box. As a queer kid growing up between the South Side Chicago and Gary, Indiana, they (Michael uses they/them pronouns) they were bullied for being too feminine, pushed into sports by their father to better fit in with their brothers. Rather than bottle their emotions up as advised by the patriarchal culture we live under, Michael turned to creation, like so many artists before them.

Filling notebooks with stories and poetry turned into writing lyrics and melodies for songs when as a teenager they were given a bootleg copy of Fruity Loops, a music production program, from a family friend. That began a journey of self-exploration and artistic output that continues to this day, with the drop of their debut album, XO. The 11-track album, produced in under a year with longtime collaborator Rich Dasilva, deals with topics ranging from toxic workplace culture, to capitalism, to love, but they all center around the idea that the personal is not only political, but powerful.

"I really just want to drive home the idea that whatever is personal for you is also the source of your power," Michael tells NYLON over a Zoom call from the permaculture farm they spent the summer working on. “My very existence as a Black queer, non binary person has been politicized, usually by forces that are not me. If I had it my way, I would just exist and I wouldn't have to worry about the things that I find myself being up against. But unfortunately we don't yet live in a society that gives me that.”

Opening song and lead single "Rope," a gritty grunge track with Nine Inch Nails influenced production examines this very sentiment. "I feel the pressure every which way/Being enough for everyone," Michael sings. The entry into these topics varies from genre-busting track after genre-busting track. On synth-heavy "6 Jaguars," Michael offers up a tongue-in-cheek commentary on unchecked white wealth and privilege, singing from the perspective of a woman with six Jaguar sports cars in her garage.

"On God" is a spiritual call to action, while "Blueberry" builds off finger snaps and whistles into an 808-based, tender ballad about unrequited love. "Canary," a cover of Liz Phair's stripped down, piano-backed song from her 1993 album Exile In Guyville, examines the loss of innocence that comes with transitioning into womanhood. Michael says that while they "don't identify as a woman or as a man, I do understand what it means to be beholden to the way that other people see you and trying to find your voice despite all of that."

On their unique sound, Michael adds, “I don't know how I locked into this space, but I just got to a point where I was just making the music I wanted to hear. I wasn't trying to make anything that sounded particularly trendy. I wasn't trying to make a hit or anything like that. I just was making music that I would actually like to listen to. It turns out that that's the most authentic place to make music from because thankfully people have been connecting to it and sending me really nice messages and sharing it.”

While the songs range in sonic influence, they all connect back to the idea of recognizing that what one is attacked for is often the most powerful — and precious — thing about them. As a writer and former Culture Editor at PAPER Magazine (Disclaimer: Michael and the author of this piece worked together at PAPER from 2018-2019), Michael specialized in telling the stories of other artists. Now, as they hone in on their own work as a musician, they're able to tell the full version of their own story — which is tied to many stories within our culture, and in many ways, the story of our culture at large.

“On some level, this is me deciding I don't really care how beliefs about my anger are received, because in this day and age with everything that's happening in the world, if you're not angry, you're not paying attention," they say. "As Solange said, ‘I have a lot to be mad about.’ She sort of gave us all as Black people a lot of permission with that song, and it was putting a name to that thing, that rage and then turning it into something righteous that can be fuel for change.”

Of all the songs on the album, closer "XO" is Michael's favorite. The sweet-sounding song comes from "a place of deep self-love and unshakeable belief in myself," a place Michael needed to arrive at in order to make the album, and a place that they believe we're "all striving to get to on some level.”

“When I wrote the melody for the chorus," they explain, "it felt very heart-centered. It's almost like I can imagine myself singing that to a younger version of myself in the mirror, as a way to encourage myself. It meant a lot for me to get that down and to have a self-affirmation publicly shared. I think we all have been away from ourselves at different points in our lives, and we all need to come back to ourselves, because that's obviously the most important relationship we'll ever have. That, to me, sums up the entire project. Even though there is that expression of rage about either the world at large — and wealth inequality and racial injustice and being looked at harshly because of my presentation or whatever — there is that place of at the end of the day, none of that has much power over me because I have myself at the end.”

XO is available for streaming on Spotify and purchase on Bandcamp.