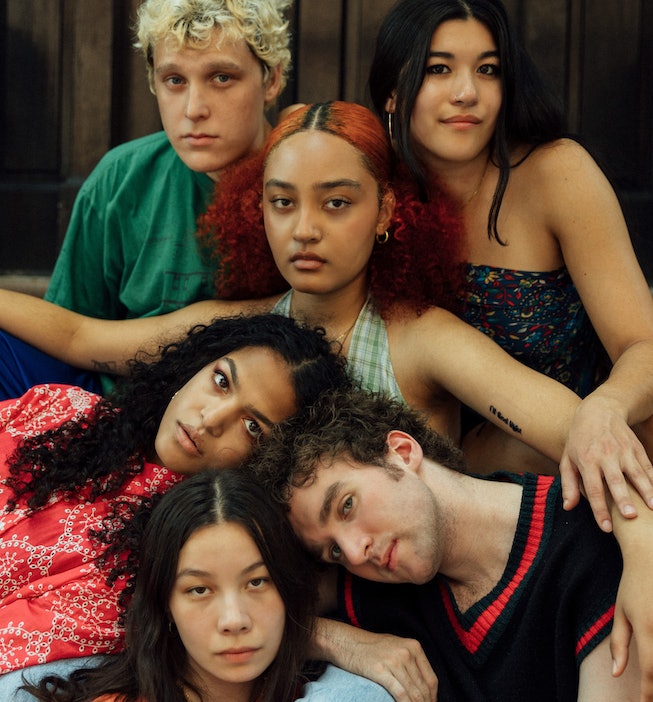 With a bit of convincing, good timing, and a well-crafted text, Kaufman and Kilgore got all four singers and mutual friends to participate in a project, to craft one album dedicated to their beloved home, New York City. That was the plan, anyway.

In 2018, the group released Heatwave, their invigorating debut album that was instantly revered by the city’s indie music scene. Thanks to the members’ diverse range of interests and abilities, Michelle’s music defied categorization, with each song bringing something new to the table from the synthesized beats on “Summer,” to the Sade-inspired vocals on “KIP,” and sunshine-infused lyrics on “Ideal.” The band arrived like a much-needed breath of fresh air — and found their own momentum to keep the group together. “I think by some stroke of incredible luck we happened to link up with the four most fantastic singers that all happened to sound really good together,” Kilgore tells NYLON over a recent call.

Now, the sextet is gearing up to release its second album, After Dinner We Talk Dreams, a vulnerable reflection of their lives, out March 4 via Canvasback Music. Soon after, they’ll hit the road as part of Mitski’s spring 2022 tour. But before then, the group spoke with NYLON about the magic that makes them click, which band names didn’t make the cut, and their dream collaborators.

How did you come up with the name Michelle?

Sofia D’Angelo: It was either this or Gertrude. I went in for my sessions for Heatwave, and I never went back to Julian's apartment. All of a sudden, I found myself in a group chat and everyone was suggesting names for the album and names for the band. I was in college at [New York University], just like, “This is just some project I did. I guess it's cool, I'm down with whatever.”

Then someone threw out “Heatwave by Michelle.” I think we had argued about heatwave being the title for the album. And I think I pitched him being like, “Heatwave’s a cool name.” Then I went back into hiding at NYU and then people were like, “Michelle.” And I was like, “Okay.” Something like that. That was my personal experience, which doesn't usually match the reality of what happened. But that's just my perspective.

Charlie Kilgore: Yeah, it was all in our group chat.

Kaufman: I've got the screenshots

Kilgore: Other candidates for names that were thrown out in the group chat before we settled on Michelle were I Sniff Paint, and Delicious Breakfast.

All very cool options. Did it come down to a vote?

Kilgore: You don’t have to say that.

D’Angelo: I think Delicious Breakfast, personally, is really great, because we got from Delicious Breakfast as an idea to After Dinner We Talk Dreams, the reality. Foreshadowing? Maybe this was planned out all along. Maybe we're like Vince Gilligan. We knew the outcome of Breaking Bad the whole time.

What makes you guys work well together as a group?

Layla Ku: I feel like I’ve answered this question a lot, and then we end the interview and I'm like, “Is that why?” But I genuinely do feel that [the] odds are very low of six people being able to consistently resolve what needs to be resolved in any other circumstance.

I do think, in some ways, it is [our] character. I feel like other than the fact that we emphasize communication with one another, and see to it that we're constantly doing so, there's definitely some other factors that are beyond our control, that have resulted in us being able to do this together and be very pragmatic and focused on resolution and communication. But we do also work very hard too — take the time, make the calls, sit down, run through things. “Yes, no, maybe,” back and forth, until we can get to a spot where we're all feeling like this is the best possible outcome and this is what we're going to move forward with.

It sounds like a class project. What you’ve described is sort of — magic’s such a corny word — but, the essence that makes it all come together.

Emma Lee: I was just going to say, I've never thought about it that way. That’s a really cool way to think about it, because I feel like that's something we all experienced. It's kind of like a science project, or something. I think everybody is very different, and I think that that creates a lot of challenges. I feel like if we were all the same person — or grew up the same way, or like, we're interested in the exact same thing — I don't know that we would be able to create the way we do or that the music would sound the same. We get to have such a multidimensional sort of shape to the mission.

Totally, and you can hear it in the music. Did you all have a different style that you wanted to explore?

Kilgore: Everyone does have different styles that they gravitate towards. But because everyone's music taste is so varied — and because everyone has the chops to be a genre chameleon — I think we can just come in every day and follow whatever strange sort of fancy we’re feeling, pretty unabashedly.

So whether that's, like, Layla listened to a Sly and the Family Stone track this morning and then can't get that bassline out of our head, and we’re like, “Ok, how do we do that?” Or Sofia came in and she's like, “I'm feeling like an Incubus vibe,” and we're like, “All right, that's what we're doing.” We've kind of trained ourselves to be ready to leap wholeheartedly into any kind of flight of fancy, regardless of genre.

What inspired After Dinner We Talk Dreams?

Jamee Lockard: Some of us were in school still, so we kind of just took every break we had to write a new chunk of songs. We wrote [during] the winter right after Heatwave. We wrote the summer following Heatwave, et cetera, et cetera. So we kind of just kept writing songs and we kept thinking like, “We have a whole album done, maybe we even have enough for two albums.” But instead of just releasing everything we had ever written, we chose to accumulate songs until we reached about 50 unreleased songs.

Then we went with that down to 14 of our favorite, strongest, tracks. And then “After dinner, we talk dreams,” was a lyric from the last song on the album, “My Friends.” I think it just really spoke to us because in our last writing track for the album, we were at Sofia's house the whole time. We would have a family dinner every day after we finished writing, and we would do our rose, bud, thorn, and just have silly conversations, and it really allowed us to bond like a family because we ate like a family.

How do you write songs as a group of six?

Lockard: Well, we never do it with all six of us. It's just too many cooks in the kitchen, but we do groups from two to four. Generally around three or four. Everyone has a different, slightly different, process. But in general we like to come together at the concept, break apart, write separately, [then] join back together and see what we’ve all cooked up. If there's something good there, we try to mix and match or refine what's already been written. So it's a lot of coming together, breaking apart, coming together, breaking apart.

“We've kind of trained ourselves to be ready to leap wholeheartedly into any kind of flight of fancy, regardless of genre.”

Can you tell me how you got connected to Mitski?

Kaufman: It's kind of a long story.

Lockard: I think long story short, we're very excited to open for Mitski. She's a legend. We've been dreaming of this moment for years. It was actually just like our pipe dream, at a certain point, that we never thought would happen. So we used to share a manager, so I think that's how we got on her radar. She DM’d us at one point, we freaked out, and when we found out that she wanted us to open for her, I think it was like a pinch me moment.

Are there any other artists you would like to work with?

D’Angelo: Rihanna. Rihanna's baby. I saw a photo of the baby bump with A$AP Rocky, and was like, “They’re so cute.”

Lockard: A SZA collab or a Frank Ocean collab would kill me, but they're also both very selective.

Kilgore: It's definitely a slightly less current collab, but for me, it would probably be Sade.

Lee: I'm not very good at favorites. I get very anxious when I have to pick favorites — but I'll list some names where if I met them, or were in the same room, I’d probably, like you know, pee my pants or be very excited to work with them. Maybe Feist, or Karen O from the Yeah Yeah Yeahs. Growing up, I listened to a lot of their music.

Ku: I have to decline to answer this question, because I'm going to read this article back and be distraught with my answer and be like, “No, it should have been this other person.” There’s too many to name.

What songs are you looking forward to performing live?

Kaufman: This is a terrible take, but, “The Bottom.” I think “The Bottom,” it's an older song of ours but I still think it's really, really good. I think that might be one of our best songs that we will ever do. And I feel like when it's performed right, and the track is hitting just right in these big venues, it leads to such a crowd euphoria that is pretty unmatched.

D’Angelo: There's a new track on After Dinner We Talk Dreams called “Talking To Myself.” It’s one of the undercover songs that I think people are just going to love. Hopefully — I can't speak for everybody — but from our experience of performing it live, as soon as it starts, people start grooving and vibing. And when the four of us are all like locked in with our harmonies, and the choreo, and the energy of the song, it locks in really nicely. I think it’s a really great new energy to share with the audience.

Lockard: This may be a hot take but I'm really excited to perform “Fire Escape” live, eventually. I just love the harmonies in that song and I love how we can get quiet and the crowd will be respectful and quiet with us.

Michelle’s sophomore album, After Dinner We Talk Dreams, is out 3/4 via Canvasback Music. Catch them on tour with Mitski this spring.