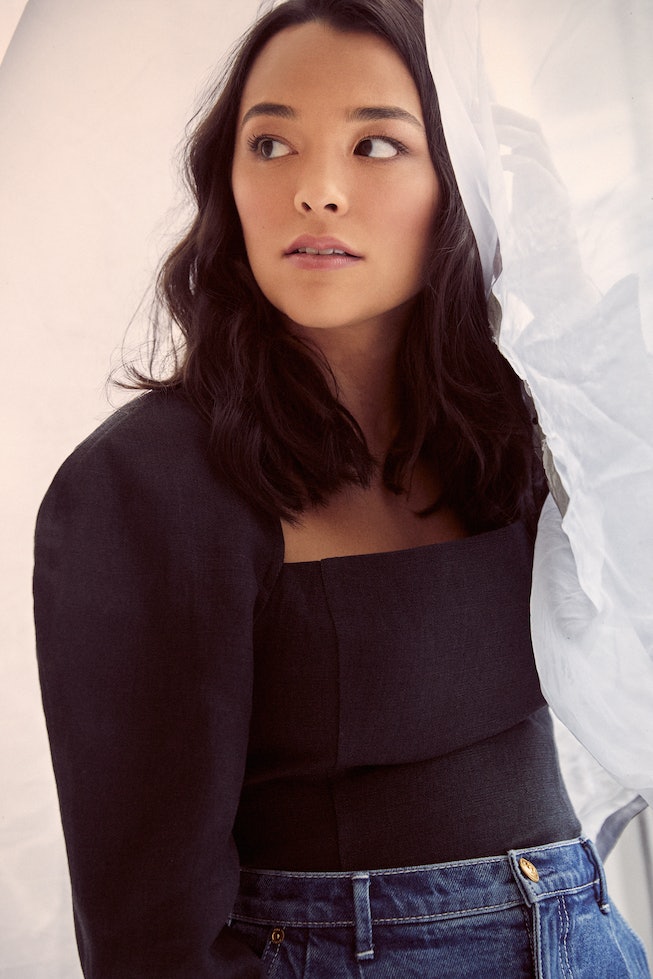 Midori Francis loves Christmas. She’s about the whole holiday procession — the decorations, jolly music, gift-giving, you name it. Her love for the yuletide season couldn’t come more in handy in playing her on-screen counterpart, Lily, a Christmas-crazed novice in dating who takes a chance on love in the most rom-com-core way to date, passing a notebook back and forth with a stranger across New York City.

Francis is one-half of the titular Dash & Lily, Netflix’s sweet teenage holiday romp and an adaptation of the young adult series, Dash & Lily's Book of Dares. Lily’s love interest is Dash, played by Austin Abrams, the curmudgeon teenager who of course finds the holiday season fake, annoying, and isolating. His character is distant cousins with Lady Bird’s pseudo-intellectual, Kyle Scheible, if you swap out the bad boy intentions with heavy doses of child-of-divorce angst. The two are absolute nerds for The Strand (Lily is tight with the employees, while Dash is so devoted to literature that he inadvertently chastises a worker for filing a Gabriel García Márquez novel under M instead of G) and it’s in the famed bookstore that they kick off their journey.

Dash and Lily begin leaving directions for the other along with challenges and questions to get to know the other without revealing their identities. Dash & Lily spares the audience the need to suspend disbelief that two Gen Z teens wouldn’t immediately sleuth out the other’s social media accounts; neither party is allowed to use Google when it comes to their courtship. The Moleskin journal makes its way across the boroughs, and holds both Dash and Lily’s triumphs, vulnerabilities, and dreams — all the ingredients needed for chastely falling in love.

It feels heartwarming to see Manhattan in its once-crowded holiday prime, even if it means turning up the saccharine dials to 100.

Dash & Lily’s comedic moments are powered by adventurous mishaps — when they’re not nailed by the excellent Troy Iwata, who plays Lily’s queer brother slash life coach, Langston — but the heart of the show comes from the compromises both characters take in an effort to get closer to one another. Dash braves Santa’s North Pole set-up at festive Macy’s, Lily hits the underground party circuit on her own, and they cheer each other on through the notebook, each turning innocent crushes into something more intense.

NYLON hopped on the phone with Francis to talk about connecting with Lily, her favorite rom-coms, and if she thinks Dash and Lily’s romance has what it takes to last.

I feel like people don't really make rom-coms anymore, so this was just a really cute throw back to that. Are you a big rom-com fan yourself?

Yeah, I like rom-coms. Some of them. When I don't like it, I really don't like it. It's just one of those genres. But when I love it, I love it. Is Eternal Sunshine of the Spotless Mind a rom-com? I think it's sort of in that world. It's many other things. That's one of my favorites. Maybe it's a bit too dark. I like 500 Days of Summer. The Big Sick was one of my favorites. I felt that actually really reinvented the genre for me in terms of rom-com movies. Did you see Palm Springs?

Yes, I did actually. I had fun watching it.

That was one of my favorite movies of the year. So I guess I really do love rom-coms! But Palm Springs, to me, was so good. As much as it is a rom-com, it was very much about two separate people on their own journey who meet and have to figure things out alone. Oh God, I love that. Actually, sometimes being here in this hotel [for filming], feels like Palm Springs because we wake up every day to the same thing in this very weird way. But it's awesome.

I love anything that plays with the concept of time. It had a cool sci-fi element without hammering it in.

Like the sci-fi isn't the central thing, like you're not just looking at, I don't know, robots the whole time, but it's in there. It's a magic element. Like Eternal Sunshine of the Spotless Mind actually had that a bit with the, you know, the erasing of memories. And so did Palm Springs, obviously. I looked this up online afterwards because I was obsessed and found out that he had been in the wormhole for 44 years or something. And she had been there, I don't know how many, like a few. And in that time, he choreographed the dance and she figured out black matter and how to get out of the wormhole.

Typical! He would be getting drunk literally forever.

I know. Over and over!

Lily is very much in her own bubble at the start of the series. She’s shy, she has a hard time relating to people her own age, she’s still hurt from her crush calling her weird a decade ago. She’s a native New Yorker, and yet she uses a physical map to get around the East Village. Did you ever get kind of frustrated with the choices she would make as a character?

Absolutely not. I love Lily and relate to her a lot. I assumed that she was probably bullied a lot, and that was just one instance that stuck in her head. I was also bullied as a teenager and made fun of for being Asian and things like that. And those situations have massive effects on one's psyche, and can truly prevent one from putting themselves out there or from believing in oneself. I think that Lily is at that crucial age in her life where she's going to become the person she's becoming. And so I actually had a lot of compassion for Lily, like a lot.

At the beginning of the series, I wanted her to be a bit stronger than she was. I actually had a talk with my director, Brad Silberling, who directed the first two episodes, about that. And he was like, you know, we really need a place for her to start and a place for her to finish. And so you just have to trust that we got her and we will make sure that she can come from this as a whole person, but we need to start her here for the story and to show her growth.

Is there a turning point that comes to mind?

I think the pivotal turning point in the series for me is when she goes to that club in episode three and really puts herself out there in a big way. And she does some very weird things with their body and kind of blossoms. And then, you know, beating up a snowman to calling somebody out on what they did, when she normally doesn't do those things. All of those little moments were super fun to play. Overall, I would say that I had a lot of compassion for her and, and understanding.

One of my favorite parts of the series was the sibling relationship between Lily and Langston. I looked forward to those scenes and I thought they gave the show a lot of heart and comedic relief. How did you and Troy Iwata get to that dynamic?

Oh God, well he's Troy, that's number one. He's like such a goofball. And then what you see on screen, I mean, he's so much more than that, but what you see on screen is a large part of the kind of energy he brings to set, which is like, not taking everything so seriously and having a laugh about things and making fun of himself. And so that was super easy. I have an older brother and a little brother. It's very easy to slip into brother-sister mode for me. I just understand it, especially when it's teasing and that kind of stuff. There was just a natural understanding there.

That really checks out. I thought Lily really shined in those moments. Moving on though...do you think Dash and Lily actually make a good couple?

I don't have enough information to answer that question. They've known each other for, like, what? I don't know. I would say get back to me after they dated for a year. [Laughs]

We have to suspend disbelief!

I would say that all of the signs are pointing in a positive direction, especially because they found each other and their relationship, thanks to the notebook, has been one that makes them focus on themselves and grow individually. And I think that is the success to any relationship, not ending in some kind of codependency, but actually still being allowed to be who you are. That can be challenging in relationships sometimes. But I think so far, the signs that I'm seeing are that it's a relationship where they can each be themselves. And I think that's probably a very positive sign.

How do you feel about Christmas as Midori? Are you as into it as Lily is?

Yeah. 100 percent. Let's say Lily's at 100 percent, maybe I'm at like 70 to 75 percent. Like when I was a kid, I was probably 100, and now I dialed it back, but I love Christmas. I love listening to Christmas music. I love buying people Christmas presents. I love the decorations. I love it all.

So that was probably very easy for you to tap into.

So easy, which I was so grateful for, because can you imagine if my job was to pretend I loved Christmas and I hated Christmas? I would have deserved an Oscar even though it’s a television show.

What ended up being your favorite part of the series?

I've always loved episode 3. That dance was so much fun. My director, Pamela Romanowsky, is just the coolest person, and has so much trust. I had a choreographer from Be More Chill help me with the moves, but a lot of the ones I was coming up with were like kicking the air, punching the air and never was she like, ‘You know, that's a little odd.’ She was just like, bring it on! Bring me more! Yes! I love the way that it ended up being filmed, and it was so beautiful.

Then it was super fun to see the other side, like Austin and Dante Brown, because I hadn't seen so much of that because we shot separately. To see his world unfold, to learn about Dash's parents. I also love when we meet at that party in episode 7 because that was a super fun thing to play. I thought that that came across well, that we were meeting for the first time and didn't know who each other was.

Nick Jonas is an executive producer on the show. Did you get to work with him one on one?

You know, Nick and I had lunch every day. We were at the bar. No. [Laughs] I didn't get to even see him because he wasn’t in my storyline and we would do these tandem scenes sometimes. So, Dash is on one side filming, and I was filming something else without Nick Jonas. But he recently posted something very sweet on Instagram, about his thoughts on the character of Lily, and his favorite scene, being the club dance scene. And so I was so touched by that.

Let’s talk about the show’s running joke, which is a fake Pixar movie called Collation...

The female character was a blank piece of paper and she falls in love with a stapler...

And Gina Rodriguez voices a highlighter? It was such a weird, funny joke. If Collation were a real movie in theaters would you go see it on a date? Assuming theaters are open obviously?

I'd want to have a drink first, and then I’d fully enjoy it. [Laughs]