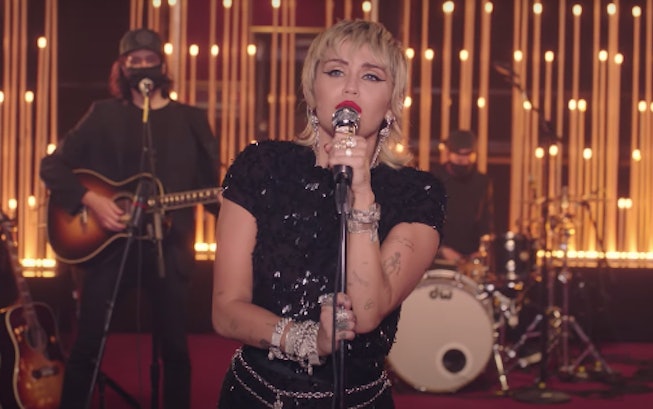 Fresh off her performance at the 2020 VMAs, Miley Cyrus took to the BBC Live Lounge stage for an intimate, smoky performance. She swapped the James Turrell-adjacent lighting she basked under during the award show for a sultry candlelit set where she paid tribute to fellow pop Goliath Billie Eilish with a cover of "my future."

Cyrus made it a much noisier cover than Eilish's original, transforming the sad girl anthem into a robust cabaret lounge performance to really show the Gen-Z girls how it's done. She even added a lyrical twist of her own. “I’m in love, but not with anybody else/See you in a couple years.” Cyrus then looked into the camera, and said, “but probably not,” and promptly stuck her tongue out. There's a little bit of Bangerz left in her after all!

Eilish wrote and recorded "my future" with her brother Finneas during quarantine and released the track this past July. “When we wrote this song, it was exactly where my head was at," she explained. "Hopeful, excited and a crazy amount of self-reflection and self-growth.” It makes sense that she'd perform it at the Democratic National Convention last month, as the week-long political theater event focused on the ambiguity of things like "hope" and "self-growth" versus policy.

Cyrus also delivered emotional performances of "Slide Away” and “Midnight Sky,” the latter which will land on her forthcoming record She Is Miley Cyrus.