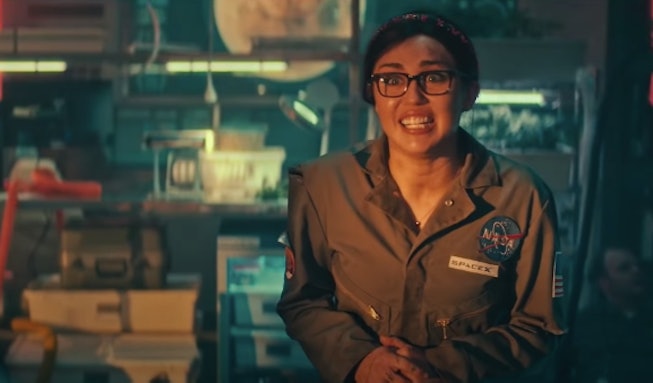 Elon Musk hosted Saturday Night Live on May 8, sparking controversy over whether the current richest man in the world should be given a comedy platform. He was also joined by slightly less polarizing musical guest Miley Cyrus, and the two appeared in a sketch about Mars with Pete Davidson.

In the sketch, Davidson plays his fan favorite character, the disturbingly chill Chad. The scene takes place on a SpaceX station on Mars, as Chad volunteers to save the human colony, even though it means he’ll die. Cyrus played a resident of the space station and Chad’s apparent lover.

After saying she’ll 'always cherish what we've had together,' Cyrus adds, 'Oh, god, I wish we could make love just one last time.' The camera then cut to Davidson totally naked, before she added, “But we can’t.” Then, she tells Chad that she’s pregnant and he’s the father, to which he says, “No thank you,” and seals his airlock, entering Mars instead. Unfortunately, in a twist fairly graphic for SNL, Chad’s head explodes in his helmet. Musk adds, “Well, I did say people were going to die. I’m out of here.”

Miley also performed two songs on Saturday, including the self-titled track from her latest record Plastic Hearts, and a collaboration with Kid Laroi on his viral track “Without You.”

In addition to appearing in several sketches, Musk made the case for interplanetary human living, and also announced that he was the first person with Asperger’s to host SNL. However, many were quick to point out that original SNL cast member Dan Aykroyd also had Asperger’s. Musk’s partner Grimes also appeared in a sketch as Princess Peach.

Watch Miley and Davidson as star-crossed lovers on Mars below: