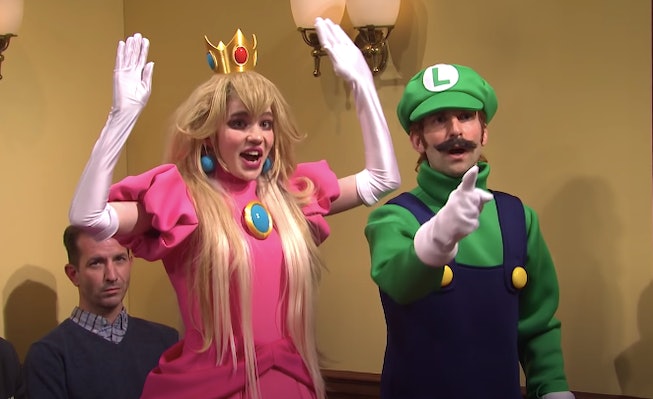 Grimes made a surprise appearance on the latest episode of Saturday Night Live last night, May 8. The Mother’s Day-themed show was hosted by Elon Musk, and in a Super Mario-themed courtroom sketch where Musk played Wario on trial, Grimes appeared as Princess Peach. This is camp.

It’s a tradition for hosts to be joined by their celebrity partners on the show (most recently with Carey Mulligan and Marcus Mumford). This was the Miss Anthropocene singers’ SNL debut, even recently taking to Twitter to theorize about why she’s never been invited on to perform: “The music booker from SNL came to my show once but I literally concussed myself in the first ten mins of the show, blacked out and played a famously horrific set that I have no memory of and I think the booker thinks im the worst live act ever haha but kinda funny anecdote.”

Musk appeared in several sketches, including one set on a future SpaceX Mars colony in which Pete Davidson and Miley Cyrus played ill-fated astronaut lovers.

Watch Grimes as Princess Peach and Musk as Wario on trial, below: