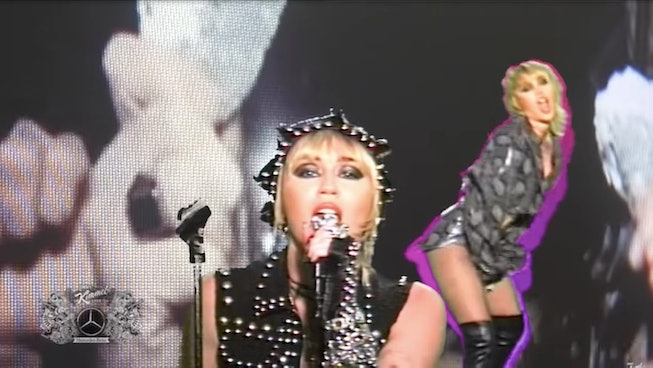 Miley Cyrus' latest live performance of "Prisoner," her bombastic rock collaboration with Dua Lipa, involves a lot of leather, a lot of studs, and a lot of green screen. The pop star recently made an appearance on Jimmy Kimmel Live! where she gave a colorful and wacky rendition of the song against a morphing backdrop of retro VHS video, resulting in some interesting compositions to say the least. At one point, Cyrus does the Macarena, and at another, she's perched atop the Statue of Liberty's crown.

During her appearance, she also received the official plaque for her iconic 2009 anthem "Party In The USA" finally getting diamond certification by the RIAA, meaning the song has sold at least 10 million units. The single received a major boost in streaming earlier this year shortly after news outlets finally called Joe Biden as the winner of the presidential election; taking to the streets in celebration people were filmed singing and blasting Cyrus' song, leading the track to re-enter the iTunes Top 200 chart.

"One thing that's become pretty amazing about 'Party In The USA', is it's become a song that represents victory," Cyrus said on Kimmel. "When you write a song or create a song like 'Party In The USA' you never know what it's going to become or what it will represent 10 years later. It was an honor that in some small way I could play a part in the celebration that took place after Joe Biden and Kamala won this election."

And while she hasn't yet been asked to perform the single at the impending inauguration, Cyrus says that she has two different versions of the song prepared, just in case.

It's hard to say anyone's had a better comeback year than Cyrus, who finalized her divorce with longtime partner Liam Hemsworth in January. During the lead-up to her seventh studio album Plastic Hearts, it was as if most of the country heard her voice for the first time, falling in love with her countless incredible classic rock covers of Goldie's "Heart of Glass" and The Cranberries' "Zombie." The album itself was also well received, with Rolling Stone calling the project her "most self-assured record yet." The album also topped Billboard's rock albums chart, making it the pop star's first record to do so.