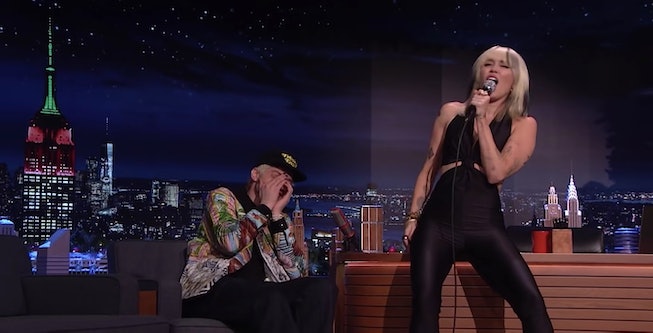 If you haven’t heard, everyone including God is awaiting their turn to date Pete Davidson. On Thursday night, Miley Cyrus tried her hand by serenading the SNL cast member with an impassioned, impressive cover of Yvonne Fair’s 1975 hit “It Should Have Been Me” during their joint appearance on The Tonight Show with Jimmy Fallon.

Of course, the performance was really a joke between friends as Cyrus cashed in on the internet’s biggest meme of the moment and got to good-naturedly poke fun at Davidson along the way. The two appeared on the late-night show together to promote their upcoming NBC New Years Eve special, Miley’s New Year’s Eve Party Hosted By Miley Cyrus and Pete Davidson, a two-hour television event of musical performances and more the two will be co-hosting come Dec. 31.

Cyrus opened her cover of the jealousy anthem with a husky dedication to the actor — “Pete Davidson, this song is for you. When I saw those “photos,” this is what I played — referencing the now infamous paparazzi photos capturing Davidson and Kardashian’s whirlwind courtship which included an unexpected visit to his hometown of Staten Island, NY.

As her performance continued, she eventually made her way from the performance stage to the interview stage to belt part of the song directly in Davidson’s face. Vocally, Cyrus sounded terrific, her voice sleekly transitioning from husky howl to bluesy growls, putting her cover of Fair’s song up there with her past renditions of Blondie, The Cranberries and more.

Cyrus also went the extra mile to put the spotlight on Davidson by inserting her own hilarious quips throughout the song. “It should’ve been me,” she sang at one point, “in that Lamborghini leaving that nice ass restaurant. I’m going to watch a movie in freaking Staten Island!” Davidson, a good sport throughout it all, could only hide his face and laugh.

Cyrus and Davidson also took turns guessing each others’ true confessions in a came called, well, True Confessions, in another segment of the show.

Despite all the jokes it seems Davidson and Kardashian are actually serious about their relationship together. PageSix reported that they made it official back in November, and though everyone’s still wondering how it happened, it’s at least gotten Davidson’s coworker Keenan Thompson’s blessing. “If they’re happy, I’m happy,” he recently told Access Hollywood.