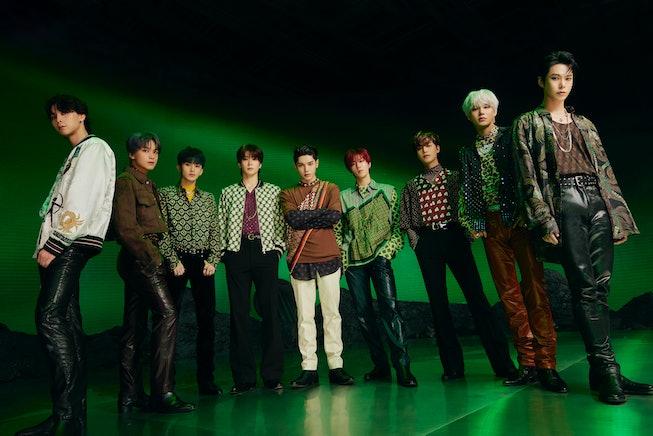 “We’re vampire cowboys now,” says NCT 127’s Mark of the concept of the K-pop group’s latest track “Favorite (Vampire)” — which he calls a “wicked” love song — over Zoom. “We are so deep in love that we all become vampires. It’s horrific, but at the same time, beautiful.”

His explanation is enough to make one shake their head in confusion and amusement, but NCT 127, the nine-member offshoot band from the larger 23-member NCT supergroup, is used to this incredulity.

In the five years since they debuted, NCT 127 has become known for its genre-bending and expansive musical universes, crafted to perfection through mesmerizing choreography, dazzling fashion, psychedelic effects, and most of all, immersive concepts. Its members — Taeil, Johnny, Taeyong, Yuta, Doyoung, Jaehyun, Jungwoo, Mark, and Haechan — function as an independent group of the larger NCT project, an unprecedented band in K-pop formed with the intention of being a malleable, interchanging supergroup that would launch tailored subgroups in different parts of the world, all with the aim of connecting with listeners. As of 2021, the group has 23 members spread across four subgroups — and is still growing. In addition to the existing NCT U, NCT 127, NCT DREAM, and WayV (which operates out of China), fans are gearing up for the debut of NCT Hollywood.

At the center of it all rests NCT 127. Its name is a reference to the longitudinal coordinates of Seoul, South Korea, and functionally NCT’s “ground zero.” On Monday, the band released Favorite, the anticipated repackage of its third studio album, Sticker, released in September 2021. Over a recent Zoom call from Seoul, the members opened up about its lead single, “Favorite (Vampire),” the previous album Sticker, the influence of Twilight, and why they’re always striving to get better as a group.

If carrying the torch of a global music movement is daunting, NCT 127 has never shown it. Instead, the group doubled down on banging out one hit after another with their 2017 breakthrough tracks “Limitless,” which came charging at us with bass and power, and “Cherry Bomb,” the cool and casual bad-boy vibe that sealed the deal. “Kick It,” the 2020 lead single from their second studio album, Neo Zone, took their popularity to meteoric levels, spawning a TikTok dance challenge inspired by the song’s signature step-style move and becoming their first top-10 entry on Billboard’s K-pop Hot 100.

When it came time to release their third studio album, Sticker, earlier this year, the group knew it needed to be unprecedented. However, “Sticker,” its frenetic, hip hop-influenced title track that sounds like little else in K-pop right now, surprised them all. In their own words, the song was difficult to master, and even tougher to get used to: one of the running gags during the promotional season was, in fact, how it took a couple listens to get used to. “It’s the first time I’ve ever felt like I was being punished for a song,” remarked Taeyong after his first listen of “Sticker” in a behind-the-scenes video clip. “It felt a bit like I’m being rebuked.”

Despite the intimidation, the song’s groovy, enchanting flute intro and refrained ferocity pulled the members in, resulting in a dangerously addictive ear-worm that kicked off an equally comprehensive album. But whereas Sticker forced them into pastures unknown, Favorite — the repackaged album that arrives with three new songs — presented the challenge of taking something they had already done and turning it on its head completely.

“We actually first heard ‘Sticker’ and ‘Favorite’ together,” Doyoung tells NYLON. “The first reaction to ‘Sticker’ was, ‘This is going to be a difficult song.’ ‘Favorite (Vampire),’ on the other hand, just felt a bit more familiar to us theme-wise.”

“The challenge was being able to really express that kind of familiarity and make that, I guess, more suitable for the public,” Johnny adds. “We thought of ‘Favorite (Vampire)’ in particular as similar to our B-side ‘​​Back 2 U (AM 01:27).’ I feel like every time we have a song that can really take out our emotions, we're very excited to take on that challenge. Compared to ‘Sticker,’ ‘Favorite (Vampire)’ is more emotional and sentimental.”

“The lyrics to ‘Favorite (Vampire)’ pretty much are a love message,” Doyoung explains. “Not only that, the other two B-sides are also about love and play on the emotional side. In a sense, this is the first time we have really focused on [the theme of] love and were able to express it deeply and sincerely.”

Here’s a mind-bending piece of information for the Twi-hards: a certain Cullen clan and rain-drenched town helped NCT 127 prepare for their transformation into the song’s titular immortal beings of lore.

“While working on ‘Favorite (Vampire),’ I was really focused on falling into all of that emotion and expressing it. The one thing that I did think about was the movie Twilight,” Jungwoo says, the tail-end of his words being swallowed up by loud, raucous laughs from the rest of the group.

“I think it's similar to Twilight as in, we want to make this love work, but there are many challenges. Like, how she was a human, and he was a vampire,” Johnny adds, before throwing in his best impression of a lovelorn Edward Cullen saying “Bella.”

“Compared to ‘Sticker,’ ‘Favorite (Vampire)’ is more emotional and sentimental.”

Despite the vampire aesthetic, you’d be hard-pressed to find a single cloak or breeches, or even a lace-lined, free-flowing shirt in the song’s visuals. Instead, these “vampire cowboys” come dressed in sleek, tailored black suits lined with gold, bright patterned shirts, velvet trousers, and bomber jackets. The only common elements they might share with their 18th-century counterparts are the leather pants.

For NCT 127, fashion has become an extension of the group’s larger vision, adding a visual layer to their artistic vocabulary. As they hop from one universe and album concept to another — going from excitable, endearing nerds to sultry, suave men in the span of a camera’s turn — their style takes on a life of its own, stretching to fit their boundless concepts and sounds, and often with personal details added in. One small example is Taeyong’s bracelet seen in a behind-the-scenes clip of the jacket shoot for “Sticker.” According to the member, the 500-won trinket was actually picked up from a local stationery shop in Seoul.

“[Fashion] just completes the story,” says Johnny. “For every song, we have a concept. When you just listen to a song [it] is different from when you see it. We like to complete the story, and we want to make sure our audience understands what we’re trying to portray through our music visually.”

This attention to detail speaks directly to the group’s greater efforts of taking ownership of their sound and concept, simultaneously deepening the band’s own story and advancing their own skills, which they say they’re always working towards. “After every album we release, we put in more energy and try to look back through the album that we did before to try to get more advanced with each release,” says Jaehyun. “Eventually, some people get more natural recording inside the studio, or get more comfortable inside the studio and can show more of their vocals or raps or style.”

You can see their effort clearly in the behind-the-scenes video for “Sticker,” as Taeyong jumps out of his seat to choreograph moves for the track. In the studio, Taeil checks his parts meticulously before finally settling on a tone he likes, while Mark decides which parts would be better emphasized from a performance or rap standpoint. At the end of the day, beneath the complexities of their concept and releases, NCT 127 is a group deeply entrenched in development and driven solely by the desire to outdo themselves. It’s the desire to be better than the last time that keeps them going.

“I think it’s very natural to advance,” Jaehyun says. “Because [we] can always look back to what we released, and try to get better each time.”

NCT 127’s Favorite The 3rd Album Repackage is out now.