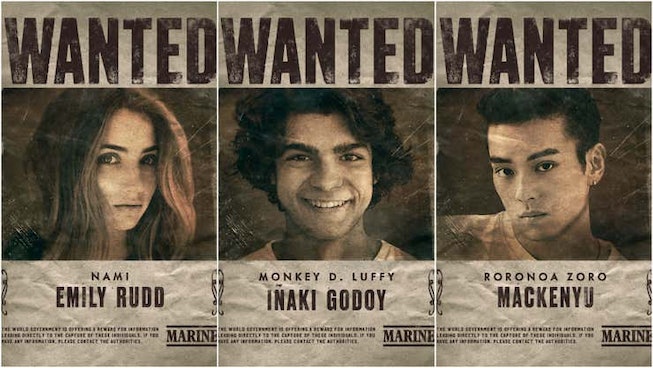 More than twenty years after the original anime premiered in Japan, Netflix is now firmly underway on its own live-action adaptation of the beloved series One Piece. After first ordering the show straight to series way back in January 2020, the streaming service has now cast five of its key roles.

Comprised of ten episodes, the upcoming series will follow the original anime (and the long-running manga series it was based on) to tell the riveting story of Monkey D. Luffy, “a young man who embarks on a journey to become king of the pirates and find the celebrated ‘One Piece’ treasure,” according to a description in Variety.

The first names to be announced for the cast include Iñaki Godoy, who will play Monkey D. Luffy; Mackenyu, who will play Roronoa Zoro; Emily Rudd, who will play Nami; Jacob Romero Gibson, who will play Usopp; and finally, Taz Skylar, who will play Sanji. Together, the five actors comprise the infamous central group, collectively known in the show as the “Straw Hat Pirates.”

For what it’s worth, series showrunner Steven Mazda and co-writer/executive producer Matt Owens certainly seem thrilled about this cast. “We are so excited to set sail with this amazing and talented cast. Finding the right people to pull off the looks, emotions, and actions of the iconic Straw Hats was a long and challenging (and fun!) process — much like the search for the One Piece itself,” the pair recently said in a statement. “But we have finally found the perfect fits! They have already begun working very hard to bring these characters to life. You will come to know and love them just as much as their manga counterparts. All of us can’t wait to show you what we’ve come up with! Onward to adventure!”

And for those concerned that this adaptation might go the way of similar ill-fated projects in the past (I’m looking at you, Ghost in the Shell) can at least sleep easily knowing that the author of the original manga series, Eiichrio Oda, is heavily involved with Netflix’s rendition. In his own statement, Oda said, “We’ve been working with Netflix and Tomorrow Studios on the massive project that is the Hollywood live action series adaptation of One Piece! How many years has it been since it was announced, right? I know, I know! But rest assured we’ve been making steady progress all along.”

Later, he preached about the show’s authenticity, blaming the long pre-production process on their insistence on getting things exactly right. “It’s not easy when you’re working with people from different cultures! But it’s precisely that process that can yield something special,” he said before also praising the cast selections. “Their face, the size of their mouths and hands, their aura, the way they carry themselves, their voice, their acting skills, their height, the balance amongst the Straw Hat Crew, etc…! We decided on this cast after numerous discussions involving people around the world! These are the people who will be our Straw Hat Pirates!”

For now, little else is known about the upcoming adaptation. But with a full cast firmly set in place, it’s safe to assume that production will be picking up soon, with a release date presumably following close behind. Could a 2022 premiere be a possibility? We can only wait and see.