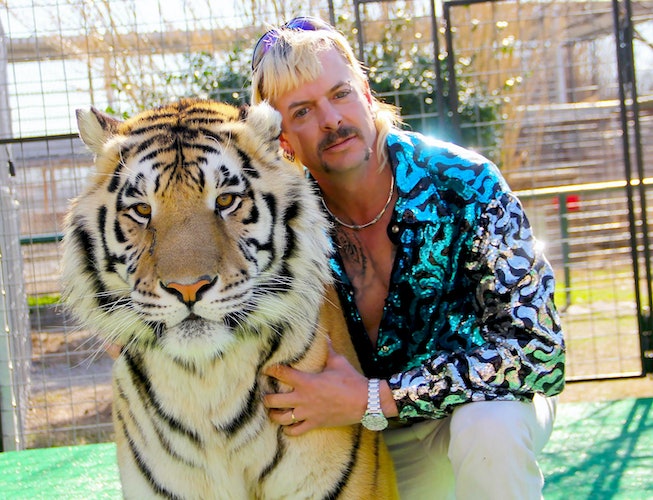 Hey all you cool cats and kittens, are you ready to dive back into the world of Joe Exotic?

Netflix just announced its chaotic documentary series, Tiger King, is returning for another round of “madness” and “mayhem.” The streamer confirmed the news this morning with the release of a new “Home of True Crime” trailer which featured snippets of Mr. Exotic and his archenemy Carole Baskin, along with other upcoming programs.

Fans of the show may remember Netflix sneakily uploaded the title to their catalogue months ago, but took it down without explanation. Well sometime between then and now, they filmed, edited, and finalized the entire series, and now we're mere months away from its release. According to The Hollywood Reporter, Tiger King is slated to premiere before the end of the year.

The original docu-series followed the trials and tribulations of Exotic and Baskin as they attempted to raise tigers and evade felony charades, all while delighting viewers with their petty drama and eccentric personalities. Premiering at the height of the COVID-pandemic, while we were all stuck at home, the rambunctious bunch became a television sensation.

According to Variety, the series nabbed 34 million views in 10 days, and later reports showed that Tiger King broke the record for the most watched show in Netflix’s history (before Bridgerton came along). But with never ending plot hangers, murder conspiracies, a missing person’s case, and slew of unkempt-tigers, what else can be expected?

In just seven episodes we saw Exotics' entire world crumble. By the end of the series he’d lost ownership of his beloved-zoo to rival owner Jeff Lowe, broken up with two husbands, potentially filed for bankruptcy, and been sentenced to twenty two years in federal prison for allegedly hiring hit-men to murder Baskin (though he claims he’s innocent).

In the final episode aptly titled “Dethroned,” Exotic says, “I’m in a cage. Do you know why animals die in cages? Their soul dies.” But with both he and Baskin still around, there’s still plenty of life to live and stories to tell. Netflix has yet to reveal the plot of Tiger King's revival, but we’re hoping it answers at least some of the questions they left behind. Like how is prison treating Exotic? Is Baskin still a person of interest in her ex’s disappearance? And, of course, who's taking care of the cats?

In the meantime, keep an eye out for clues in the teaser below: