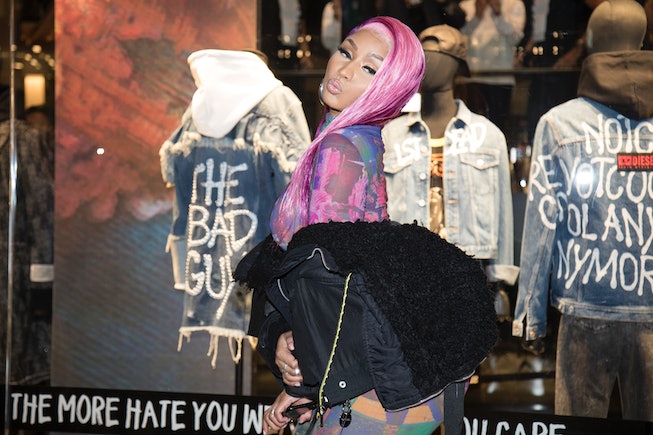 It’s been a long while since Nicki Minaj has really, truly released new music. Though she returned to the scene briefly in 2021 to promote the arrival of her early mixtape Beam Me Up, Scotty on streaming services by sharing a few previously unreleased tracks from the project, she’s otherwise spent the last few years taking the backseat, largely appearing on other artists’ songs as a coveted feature guest.

Her semi-departure made sense: Minaj gave birth to her son in October 2020 and, on the legal end of things, spent the large part of 2021 embroiled in a damning lawsuit filed by Jennifer Hough, an alleged sexual assault victim of Minaj’s husband Kenneth Petty, who accused Minaj and Petty of intimidating her into recanting her rape accusation. (In Jan. 2022, Minaj was dropped from the lawsuit. The case against her husband, Petty, is still ongoing.)

Now, it appears Minaj is ready to get back to business. Without fanfare, she announced on Wednesday that a new collaboration between her and Lil Baby will be arriving Feb. 4.

“DO WE HAVE A PROBLEM!? BABY X BARBIE,” she and Lil Baby both tweeted. “PINK FRIDAY FEB 4.”

There’s no word if the upcoming track will be a standalone single, or if it’s part of a larger project from either Lil Baby or Minaj. The last Minaj mentioned her next album was during a 2021 Instagram Live with Drake, during which she only said that it’s “coming soon.”

Minaj released her last studio album, Queen, in 2018, so we’re more than overdue for a new record from the self-proclaimed queen of rap. Then again, it could be another fake-out by the star who in recent years has been exploring business avenues outside of music, including working on a six-part HBO documentary series that aims to “explore Nicki’s brilliantly creative mind and tell the story of her personal and professional journey.”

Most recently, Minaj appeared as a guest host on Bravo’s reunion special for the Real Housewives of Potomac, and has been teasing the return of her popular, contentious Apple Radio show, Queen Radio.

So while we wait for all that, be sure to tune in Friday Feb. 4, to catch her new track with Lil Baby.