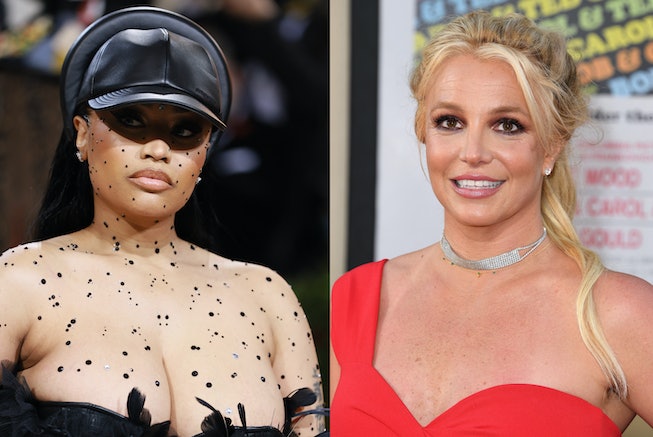 Nicki Minaj rushed to Britney Spears’ defense after the singer’s ex-husband, Kevin Federline, publicly questioned her parenting. Federline and Spears were married between 2004 and 2007 and have two children together, Sean (16) and Jayden (15), whom Federline claims are no longer in contact with their mother. In an interview with UK’s ITV, he said the boys “have decided they are not seeing their mom right now.” Federline also brought up Spear's nude Instagram posts and alluded to them being inappropriate.

His now viral commentary made its way to Minaj, who went on Instagram Live on Tuesday to condemn Federline's actions. “Do you understand what kind of clown you have to be to be a whole, grown, f*cking man, and as soon as you see somebody happy and getting married and moving on and being free and feeling good in their own skin, to do the very thing that you know is going to attempt to break them down,” she said, addressing Federline directly. “Only cowards use the media against a famous person who they once loved, they procreated with, they’re being taken care of by, they once were being taken care of by,” she continued. “Using this person’s fame as this constant ‘gotcha’ moment.”

“You think it’s OK? You think that anybody’s going to feel sorry for you” Minaj continued. “She loves those kids more than life itself. You wanna take your little goofy ass to do some motherf*ing interview? How dare you. How dare you encourage this woman's children to be a part of your nonsense.”

Federline also posted a series of videos on Instagram of Spears arguing with her sons. The videos have since been taken down, but many people were able to see them before they were removed.

“When they look back, they’re gonna say, ‘Why, why, why did we do this?’” Minaj said of Federline's actions. “They’re kids. They don’t know how detrimental this is. But you know, c**ksucker.”

After Federline's interview was aired, Spears called her ex’s comments “hurtful.” Her current husband, Sam Asghari, also shared his thoughts and implied that Federline was trying to profit from the singer, saying Federline's “gravy train will end,” when their kids turn 18 and he can’t collect child support.

Until then Minaj instructed Federline to leave Spears “the f*ck alone.”