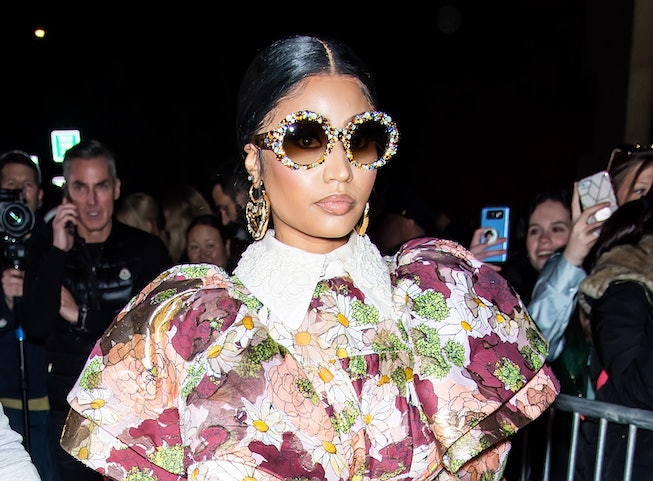 Nicki Minaj is under fire for potentially sharing misinformation about the COVID-19 vaccines. On Monday, after news spread that she wouldn’t be attending the 2021 Met Gala — which required its guests to be vaccinated — the rapper tweeted that she wasn’t comfortable receiving the vaccine without doing her own “research.” Since then Minaj’s vaccination status, and subsequent “knowledge” about the vaccine's side effects, have prompted a scandal so big, and ridiculous, that presidential advisor and immunologist, Dr. Fauci had to step in.

Keep reading for everything we know about Minaj’s COVID-controversy so far.

Why is Nicki Minaj hesitant to get vaccinated?

On September 13th, Minaj tweeted that she was infected with COVID before this year's MTV Video Music Awards (which she did not attend). “I was prepping for the VMAs then I shot a video and guess who got COVID? Do you know what it is not to be able to kiss or hold your tiny baby for over a week? A baby who is only used to his mama?” she wrote. Minaj also mentioned that Drake recently got infected despite being vaccinated, which furthered her suspicions about its efficacy.

A fan responded to the tweet, clarifying that vaccines prevent severe illness but can’t fully prevent infection. “The vaccine doesn’t prevent getting COVID, it prevents you getting serious symptoms. non vaccinated people are 11x more likely to pass away from COVID than vaccinated,” they said.

But Minaj doubled down, tweeting, “Babe. That’s not true. I had the exact same symptoms as people with the damn vaccine.”

Yes, that’s a real question. Minaj continued tweeting, sharing that her cousin won’t get the vaccine, because it affected his friend’s sex life.

“My cousin in Trinidad won’t get the vaccine because his friend got it and became impotent,” she wrote in what has quickly become a meme. “His testicles became swollen. His friend was weeks away from getting married, now the girl called off the wedding. So just pray on it & make sure you’re comfortable with ur decision, not bullied.”

Somehow, news of Minaj’s impotence tweet made it all the way across the pond. In a morning newscast, UK Prime Minister Boris Johnson dismissed Minaj’s claims.

Minaj was notified of his speech and sent a voice message back, speaking to the prime minister in a fake British accent.

“Yes, hello Prime Minister, Boris, it’s Nicki Minaj—I was just calling to tell you that you were so amazing on the news this morning. And I’m actually British. I was born there. I went to university there. I went to Oxford,” she said. “I went to school with Margaret Thatcher. And she told me so many nice things about you. I’d love to send you my portfolio of my work, since you don’t know much about me, I’m a big, big star in the United States.”

Minaj also shared her response on twitter, with the caption, “Send this to the prime minister and let him know they lied on me. I forgive him. No one else. Only him.”

Who else has gotten involved?

Since then, former host of The View and political commentator Meghan McCain got involved as well. After hearing the news, she tweeted, “That’s entirely enough internet for today.” Minaj fired back, writing, “eat shit you.”

The rapper had a much gentler approach with comedian and Tonight Show host Jimmy Fallon, who jokingly asked to interview Minaj’s cousin.

Minaj then replied, “He’s willing to talk for the right price. I’m his manager. Call me, Jimmy.”

Trinidad's Minister of health, Terrence Deyalsingh, tapped in to investigate Minaj’s claims. He found no evidence of impotence as a side effect of the vaccines, and held a press conference to share the news.

“There has been no such reported, either side effect, or adverse event. And what was sad about this is that it wasted our time yesterday, trying to track down, because we take all these claims seriously, whether its on social media or mainstream media,” he said. “As we stand now, there is absolutely no reported such side effect or adverse event of testicular swelling in Trinidad, or, I dare say, Dr. Hinds, anywhere else. None that we know of anywhere else in the world.”

What does Nicki Minaj think about the media coverage?

Minaj has continued to defend herself, claiming the media is misrepresenting her reason for missing the Met Gala and not being vaccinated.

She screenshot headlines from USA Today, Yahoo News, and The Daily Beast, tweeting, “Three lies in a row from huge news platforms. I cited my young child as why I didn’t want to travel. But notice how NONE of them mentioned that? Ask yourself why that was.”

Then when a fan came to her defense, saying the news falsely reported the situation. Minaj wrote, “they’re being paid to do it.”

Has anyone defended Nicki Minaj?

Radio host Charlamagne Tha God addressed the controversy on his show and defended Minaj. “Nicki never said ‘don’t take the vaccine.’ She spoke about why she had vaccine hesitancy, but in the very next tweet said she’d probably get vaccinated to go on tour,” he said.

Will Nicki Minaj ever get vaccinated?

Though she hasn’t confirmed when, the rapper did express some interest in eventually getting vaccinated. In a Twitter exchange with a fan, she wrote, “A lot of countries won’t let ppl work w/o the vaccine. I’d definitely recommend they get the vaccine. They have to feed their families. I’m sure I’ll be vaccinated as well cuz I have to go on tour, etc.”

Minaj also asked her followers which vaccine they recommended.

What does Dr. Fauci have to say about all of this?

Unfortunately, Dr. Fauci’s job now includes diffusing celebrity gossip. Appearing on CNN with Jake Tapper, the nation’s top epidemiologist said, “There's no evidence that it (swollen balls) happens, nor is there any mechanistic reason to imagine that would happen.” So there’s that, in case you were worried.