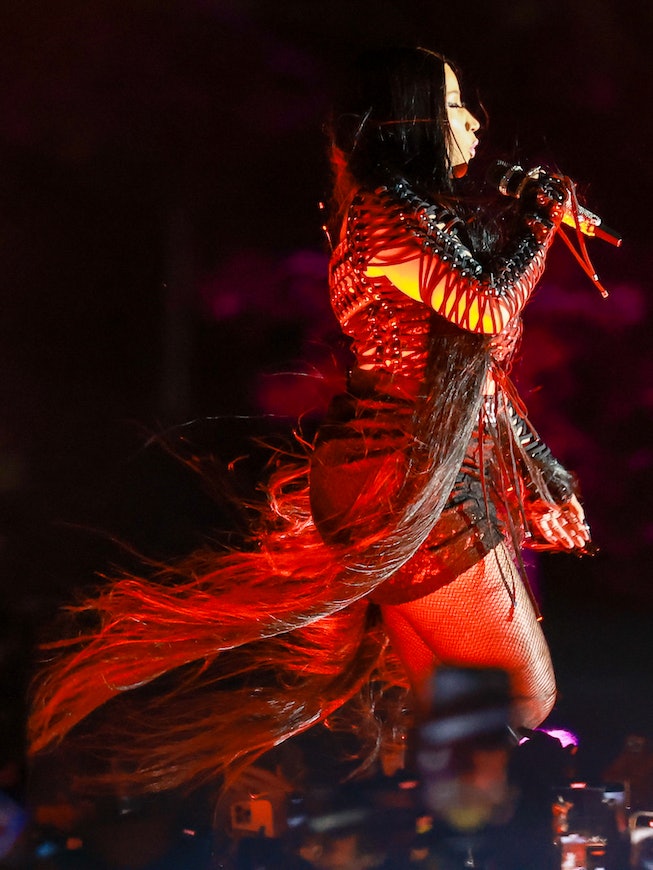 Nicki Minaj appeared on the Rolling Loud stage on Friday night like a magic trick. One minute, everything was dark, the crowd antsy after waiting for the pop star for nearly an hour in frigid, 50 degree weather; and the next, the Fashion Nova-sponsored stage was suddenly lit up, the bass-busting first bars of “We Go Up” blasting through speakers, and there she was centerstage: a mirage of flowing black hair and radiant star power.

Her entrance wasn’t the only magic trick the superstar pulled off during her explosive, if short, headlining festival set. Over her half-hour performance, she pulled guest stars like Bia, Lil Uzi Vert, and G Herbo on stage like rabbits out of a hat, and her mere presence compelled the crowd of thousands to passionately scream every word of “Itty Bitty Piggy” from start to finish when she wasn’t even on stage. This was the power of Nicki Minaj on her own turf. The queen was finally back in Queens.

But before she went on stage there was another royal factor the crowd had to contend with: the waiting. Though Minaj was scheduled to take the stage at 8:55 p.m. — and all previous acts of the night thus far started pretty much on-time — she didn’t actually come on until closer to 9:45 p.m. During that hour-long limbo period, the restless Barbz in the crowd oscillated between a joking knowingness and loving impatience for their ruler.

“Let’s be real, she probably didn’t arrive until 8:55,” joked one fan near me to his friend.

“She’s gonna perform 15 minutes and walk out,” added another in a tone that suggested he’d still leave happy with that version of the show. Spirits remained high even as three different people in my section fainted and had to be taken out by medics during the wait. Fans passed around emergency water packets to anyone who looked like they needed it, and would dance along to the occasional Drake song that’d play.

When Minaj finally came on, the crowd erupted in a wave of passion reserved for only the .01 percent of pop stars. Every phone in the crowd went up like a gopher, mine included, and the beginning notes of “Feeling Myself” incited a brief, but mildly terrifying surge in my section as people tried to rush to the stage.

Minaj, impervious to the frenzy she was causing, reigned on the stage with mesmerizing command. Though she hasn’t performed consistently since her 2019 tour with the late-rapper Juice Wrld, her innate charisma and showmanship radiated through every move she made. During “Whole Lotta Money,” she sauntered down the stage’s long catwalk holding hands with Bia, inciting screams. While performing “The Way Life Goes” with Lil Uzi Vert, she broke away to rap her verse at the edge of the catwalk, the wind blowing her hair in a spectacular tornado.

Her hair actually, as Gen Z would say, was a paid actor that night, kissing the floor as she walked around as if it were a cape, and whipping back and forth in the wind as if to add emphasis to her every line delivery. One of the first things she did on stage was run both of her hands through its silky lengths before tossing them over her shoulders. It was another magic trick that night how she managed to never trip.

Over the last few years, Minaj’s position at the top of the pop totem pole has been put to the test. It’s been years since her last album release, Queen, and recently she’s more in the news for stoking controversy —from the way she handled the abuse allegations of her husband, Kenneth Petty, to her brash Queen Radio dispatches — than for releasing music. There’s the question of whether as an icon and a super star, she just might be on her way out.

When Minaj is on stage, however, those questions tend to disappear — just for a while, at least — as you can’t help but look on in awe as she’s raps (without the crutch of a vocal track) with the same amount of zeal and ferocity as when she first debuted; as she’s still going hard to “Chun-Li” and “Truffle Butter” and even “Super Bass,” even though the audience would have carried the concert by themselves. Many times, after pulling my phone down from grabbing video, I could only gawk at how enchanting she appeared, and feel the real monumental weight of her presence.

“The crowd knew EVERY WORD,” my co-worker Claire Valentine texted me the next day after watching the performance over the Rolling Loud live stream. I should’ve probably expected for the fervor of the night to even translate through the computer screen. But, you just had to be there.