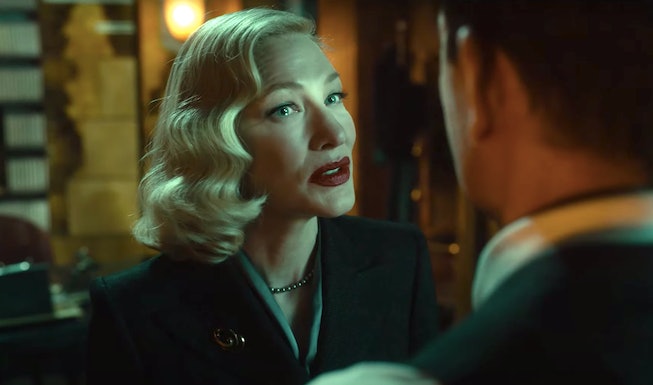 Bradley Cooper and Cate Blanchett are teaming up for a new film, Nightmare Alley. The upcoming thriller follows con-man Stanton (Cooper) who meets a devious psychiatrist (Blanchett). Together, they hatch a plan to swindle people out of their money, but run into a slew of problems along the way.

Nightmare Alley, helmed by Academy Award-winning director Guillermo Del Toro, is inspired by William Lindsay Gresham’s 1946 novel of the same name. Del Toro recently spoke about his connection to the original story. “That book was given to me in 1992 by Ron Perlman before I saw the Tyrone Power movie, and I loved the book,” he said. Though the general themes are the same, Del Toro explained that his film won’t mirror the novel exactly. Instead, he used tropes from Gresham’s iteration, along with his affinity for “noir” films, to create a modern retelling. “There are more elements that are darker in the book,” he said. “It’s the first chance I have to do a really, straight, really dark story.”

Previously Del Toro directed Shape of Water and other short films, but Nightmare Alley is his first deep-dive into thrillers as a genre. From the looks of the trailer, he got it right. In it Cooper and Blanchett struggle to maintain their sanity, while trying to hold their scheme together. “If you displease the right people, the world closes in on you very, very, fast,” Blanchett warns.

The upcoming film will premiere in theaters on December 17th. In the meantime, check out the full trailer below: