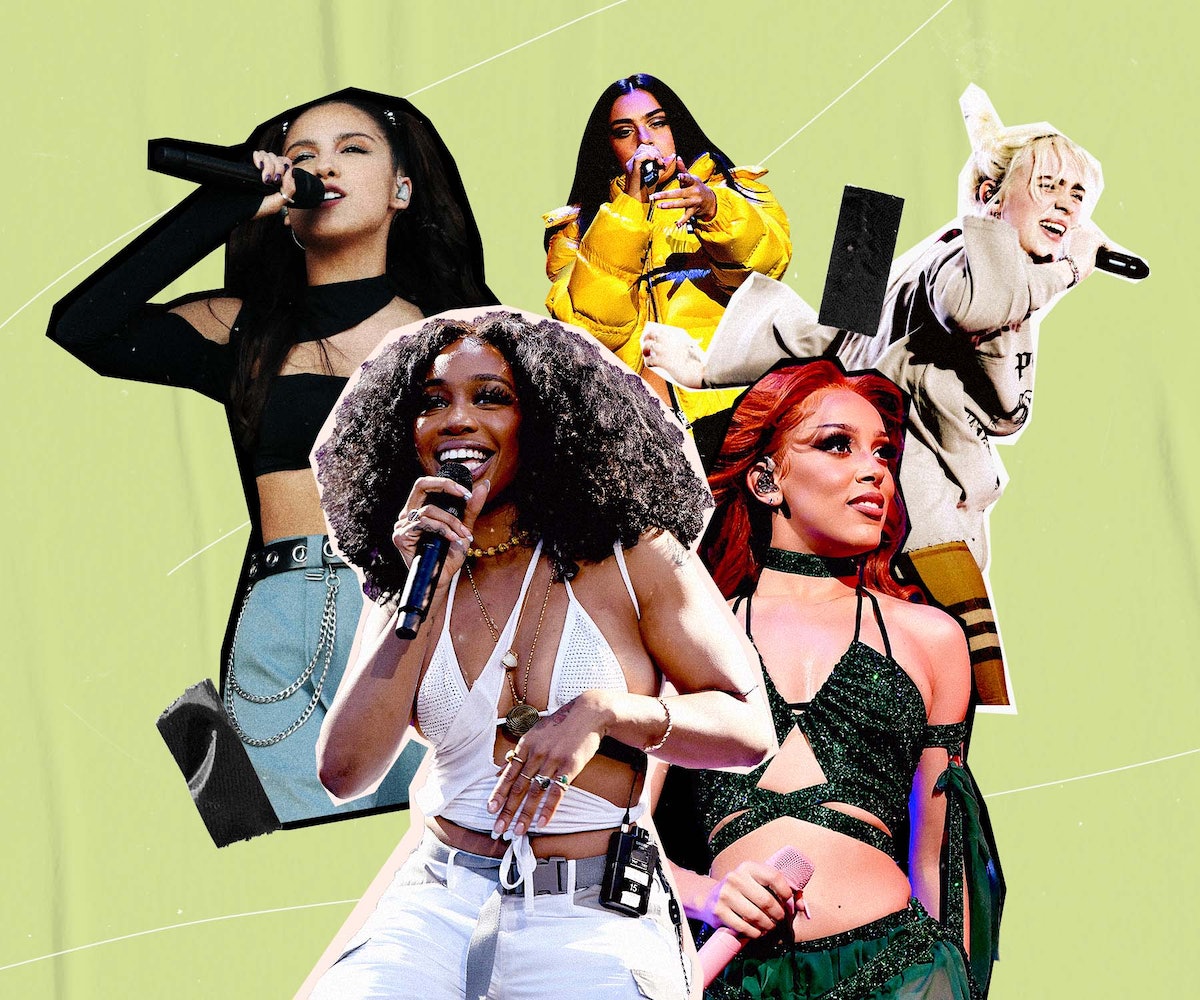 You know what they say: When it rains, it pours — and after the musical drought that was 2020, 2021 was a year of abundance. From long-awaited superstar returns, to dazzling debuts, to unexpected sonic ventures from established players, artists and musicians pulled out all stops to deliver their best works these past 12 months, more than making up for lost time. At times, trying to keep pace with the hectic, whiplash-like output was a feat in itself — but we wouldn’t have it any other way. Read on for NYLON’s Editors’ Picks of our top songs of the year, in no particular order.

Lindsey Jordan managed to turn a vulnerable, heavy track about heartbreak and healing into a catchy, upbeat bop that has me singing along every time.

Olivia Rodrigo's angsty pop-punk banger will surely remain in heavy rotation for decades to come, much like hits from genre pioneers Avril Lavigne and Paramore that came before her.

Though star-crossed primarily consists of songs about divorce and its aftermath, this sweet, hopeful tune about the preciousness and precarity of new love stole my heart (and topped my most-played list) this year.

In a year that saw pop-punk legends return better than ever, the genre's best entry came from a 18-year-old who wasn't even born when Avril Lavigne first donned her men's tie. Rodrigo is one of our best new pop stars, and this song is a welcome addition to the pop-punk canon.

She made a perfect song even better. Long live Taylor Swift.

Over a bouncy earworm of a beat, Adult Mom's Stevie Knipe delivers a kiss off for the ages: "Now, I don't even think of you when I'm sober."

Great talent must run in the family and Baby Keem is learning from the best. There are no breaks in this four-plus-minute track (and amazing three-act music video) that gets you hype at the very start, from the massive horn samples to Kendrick Lamar's flow that proves yet again why he’s one of the best in the game.

It seems like picking a Jayda G song is going to be a yearly "favorite songs" thing for me! But how can I resist? She makes the grooviest dance music out there right now.

This Hollywood-based rock duo is still climbing the ranks in the music world, but they already have the star power. "Uptight" is nostalgia at its finest, and the guitar-heavy summer anthem could easily fit into one of your favorite '90s teen movie montages.

I love everything about this song, from the synth-y, Halloween-y pop beat that makes me start dancing involuntarily to Charli's goth Barbarella styling. I can't wait until the full album comes out next year.

“Serotonin” fits into one of my favorite sub genres of music which is “upbeat songs that are actually super depressing if you pay attention to the lyrics.” This song is that trope at its best and most effective. The song is so fun to listen to, it's basically an upper.

The charm of Lil Nas X is that even though he is so outrageous and over-the-top in his persona and performance, you can tell he has so much heart. “THATS WHAT I WANT” is Lil Nas X as, perhaps, his most earnest and romantic. I think it's that sweetness that makes this song so easy to listen to again and again.

Cousins Baby Keem & Kendrick Lamar's second track together this year, “range brothers,” is a 5-minute rollercoaster of smoldering-bass lows and catchy auto-tuned highs, crescendoing with K.Dot’s “top of the morning” salutation, repeated so many times as to no longer make sense. A fitting soundtrack for a nonsensical year.

Just when I thought Lana had reached peaked Lana with Norman F*cking Rockwell, along came lead Chemtrails track “White Dress,” which really out-Lanas them all. Devastating specificity, wry observation, and the ability to poke fun at men even as they hold power over her memories — “White Dress” has it all, with breathy vocal experimentation as the cherry-on-top of a perfect LDR treat of a song.

“Fuck Him All Night” - Azealia Banks

“Just For Me” - PinkPantheress

Perhaps the best embodiment of culture’s obsession with everything Y2K this past year was PinkPantheress’ “Just For Me.” Paired with its MTV-circa-2005 aesthetic music video, the song is pop for the online generation, simultaneously forward-sounding and sepia-toned, and ultimately, timeless. Borrowing the sounds of U.K. garage, bedroom-pop, drum and bass, and more, PinkPantheress is carving out one of the more distinct sonic palettes in recent memory, and worth keeping a tab on into the new year.

I can’t effuse enough about Doss, the cult NYC DJ, producer, and genius song-maker responsible for one of the most dynamic projects of the year, 4 Hit New Songs. “Strawberry” is the project’s jammy pink center, a three-and-a-half-minute swash of peach-colored synths and twinkling bleeps that come together in a wistful but optimistic way. Throughout the song, Doss’s human-AI voice repeats, “Maybe I could sing too,” and it begins to feel quite moving after the tenth time. I’d imagine, out on the dance floor rolling face, it’d make you feel like you could do anything, too.

In March 2021, during the thick of lockdown in NYC but with prospect of spring hangs soon, Serpentwithfeet released “Fellowship,” a gentle, radiant ode celebrating the gift of friendship. The world has obviously reopened since, but for me, the entire past year has been a period of rediscovering togetherness, strengthening connections, and remembering its healing power. “I’m thankful for the love I share with my friends,” he sings on its hook, encapsulating the year’s whole journey movingly, and with the right amount of reverence reserved for our most sacred connections. Put this song on, and tell your friend you love them.

Few acts in music are as exciting as Isabella Lovestory, the reggaeton pop star whose talent is only matched by her moxie. “Alo” gets the party started with its frenetic beat and Lovestory’s manic singing, but the best part is how I always get a huge attitude problem by the song’s end. “Ya me aburriste, baby, oh my God / Ya me aburriste, mucho bla, bla, bla,” is a profound distillation of a global problem: people talking too much without saying anything interesting.

Danish singer Erika de Casier released the stellar LP Sensational in May, and her single “Busy” has stayed on repeat ever since. De Casier is a master of atmospheric R&B, and her airy vocals glide over the song’s glittering production to a straight-up hypnotizing effect. I’m personally partial to how its earworm hook — “But I’m way too busy” — is delivered with the ultimate unbothered nonchalance. Don’t even ask de Casier to pencil you in, she’s got an empire to build!

Hand on my heart, I think Lil Nas X is a creative genius. The press cycle for his debut studio album Montero is nothing short of performance art, and his lead single “Call Me By Your Name (Montero)” feels like the perfect reflection of his essence: fearless, trailblazing, and totally unforgettable. And that music video! The man does not miss.

This song almost feels demonic? Sexy? Nonetheless it's one of my favorites off of Billie’s Happier Than Ever. It only feels right listening to this song after the shit show that was 2020.

I love Miss Doja and this song is unmatched. The upbeat track has become a staple opener in my playlist while I get ready for a night out.

I heard awhile ago that the song lyrics you consistently listen to and repeat (whether consciously or subconsciously) become personal affirmations and your brain interprets those lyrics as the way you feel about yourself... So, I consider this song self-care at this point. Cheesy or not, it hasn't been on my TikTok’s FYP enough, frankly. It's a bop!

I spent a good portion of this year waiting for Chloë Bailey to finally release her solo debut single, and when "Have Mercy" finally dropped, it was exactly what I anticipated: sexy, fun, and empowering. This single is just a very small taste of what Chloë brings to the table, but it got me excited for what's next.

If you didn't know Rauw Alejandro before 2021, this would be the year to pay attention to the reggaeton singer. I couldn't go to a club this summer without hearing "Todo de Ti," and I absolutely loved it. The song has a synth-driven ‘80s vibe that puts you in a good mood.

Whoever hurt SZA, thank you, because now we're all screaming, "And if you wondered if I hate you (I do)," regardless of our relationship status. Fans pressured the singer to release the full song after hearing the SoundCloud demo and TikTok clip, and she really delivered. The whole track is just SZA doing what SZA does best: getting us in our feelings.