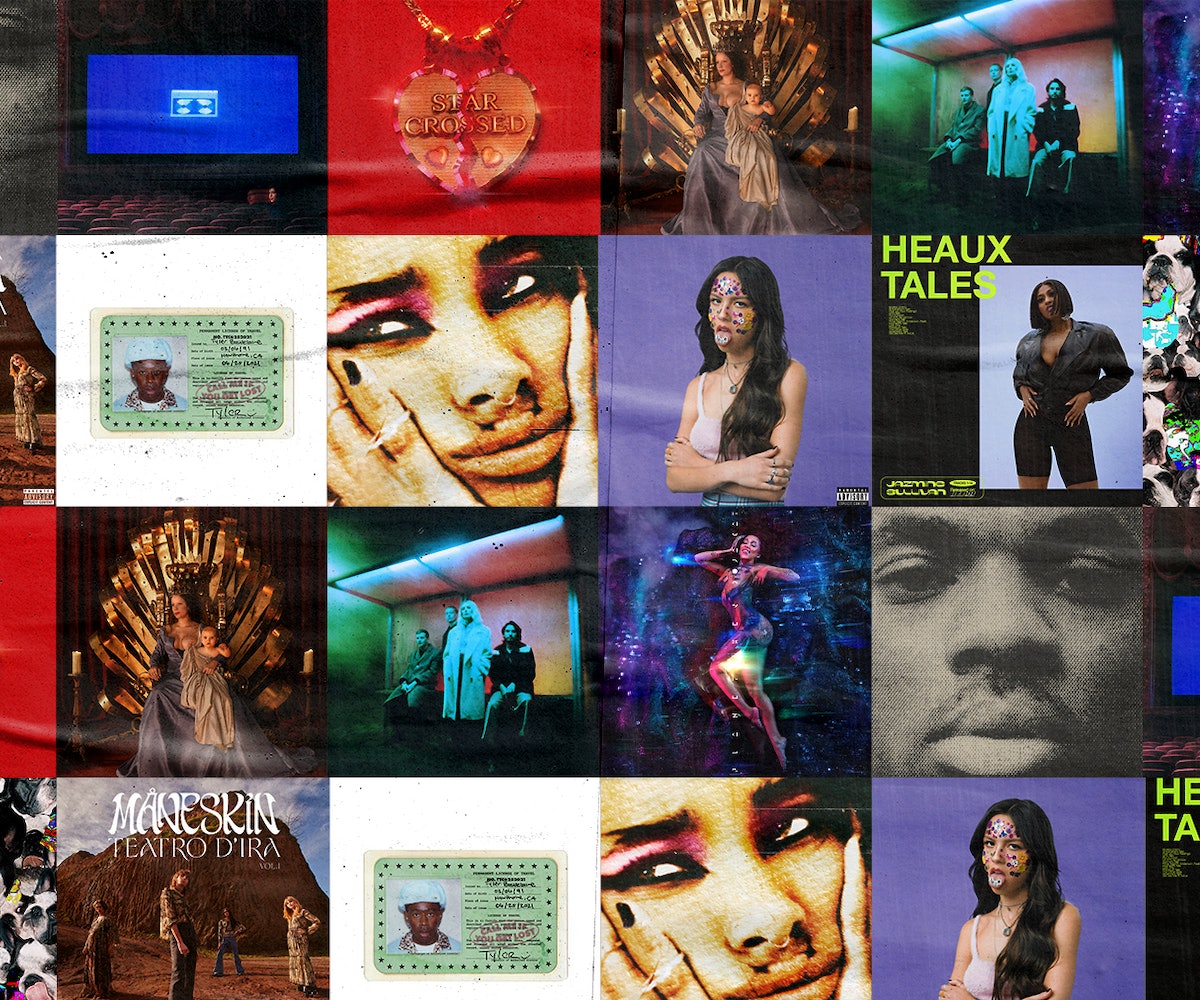 You know what they say: When it rains, it pours — and after the musical drought that was 2020, 2021 was a year of abundance. From long-awaited superstar returns, to dazzling debuts, to unexpected sonic ventures from established players, artists and musicians pulled out all the stops these past 12 months to deliver their best works, more than making up for lost time. Trying to keep pace with the hectic, whiplash-like output was a feat in itself — but we wouldn’t have it any other way. Read on for NYLON’s editors’ picks of the top albums of the year, in no particular order.

I've been waiting for three years to see what Lindsey Jordan would come out with to follow up her stunning debut album — and it was worth the wait. This is a no-skips instant classic that proves that Jordan has many more tricks up her sleeve.

If I Can't Have Love, I Want Power, Halsey

Pop star Halsey became full on rock star Halsey with this genre-spanning behemoth of an album that comes out of the gate hot with “The Tradition” and doesn't slow down from there.

Lucy Dacus returned this year with a stunning collection of songs based on her childhood journals. Her pitch-perfect songwriting will make you laugh, then cry, then laugh again.

Call Me If You Get Lost, Tyler, The Creator

It’s wild that with his sixth (!) studio album in a span of 10 years, Tyler, The Creator still does not miss. Plus, from his visually-driven live performances to his dedication to the Call Me If You Get Lost aesthetic on the red carpet, Tyler is a true artist at work who creates a whole unique world around his music.

Every track on Olivia Rodrigo’s album makes me wish I as an angsty, sad-and-in-love teen again — but in a good way. Also, since we're both Filipino, we are basically cousins, and I have to support my family no matter what.

Peruvian-born, Berlin-based Sofia Kourtesis’ latest EP release has been my soundtrack for almost everything: remote work days, cooking, driving, or when I just need some upbeat background noise. A favorite that I’ve been playing on repeat almost all year is “By Your Side,” an ethereal house track that could take you into another dimension.

I loved Chromatica, but maybe Dawn of Chromatica was the version of the album we were always supposed to get. It's even dancier, even poppier, and all the more irresistible. The “Free Woman” remix by Rina Sawayama and Clarence Clarity is pure joy.

lately I feel EVERYTHING, WILLOW

Lately I Feel Everything is like a ‘90s/’00s teen movie soundtrack for the 2020s. The album has the kind of angry rock tracks you imagine playing in Kat Strarford's (from 10 Things I Hate About You) car, and the sweet girl power song, “G R O W” featuring Avril Lavigne is like the emotionally aware twist on the movie-makeover sequence song.

In year two of the pandemic, I decided to lean into nurturing my inner angsty teen, and this album came at the perfect time. Pop-punk guitar riffs are like an instant dopamine hit to my system even if the larger lyrical story is about first heartbreaks and uncertainty about life. Sometimes you just have to have fun with feeling bad.

You never quite know what you’re going to get with a new Vince Staples album, but you can always be assured it will sound exactly like him. On his self-titled fourth album, Staples returns to the effortless scene-setting and storytelling that makes his music feel so intimate, surveying a landscape of wins and losses with his signature existential ambivalence. In a year of reflection and whiplash from trauma, Vince’s matter-of-fact clarity and acceptance helped me find mine.

Three years after delivering one of country’s great love albums, Musgraves returned with her broken heart in her hands and, consequently, one of the great divorce records of the canon. Of the songs that make up the tragedy in three parts, “Breadwinner” infuriates, “Camera Roll” devastates, and “Justified” traces all the ways a breakup can change us and our minds.

Doja Cat is the kind of artist who, in the act of exploring many different lanes, ends up simply creating her own. Planet Her’s ambition feels matched only by its undeniable creativity and extreme penchant for pure fun. And we all need to have more fun.

Jazmine Sullivan’s Heaux Tales is brilliant from its first line. “B*tch, get it together, b*tch,” orders Sullivan off the bat, those five words immediately collecting your spirit and setting the tone for the 14-track story that follows. The acclaimed R&B singer’s 2021 album is a revelation, a moving portrait of empathy, sisterhood, and modern day femininity made for and by Black women. It’s also a display of unparalleled vocal ability (though that goes without saying). If you ask us, it was worth the five-year wait.

Wolf Alice’s Blue Weekend is the British band in stunning IMAX. The celebrated dream rock quartet has never sounded as grand and big as they do on their third studio album, a feat of expressive, immersive sonic storytelling that immediately transports you to the misty streets of Los Angeles with its first notes. Its 11 songs glow, and singer Ellie Rowsell’s songwriting lingers in your head long after the fever dream has worn off. Stunning songs like “Lipstick on the Glass,” “How Can I Make It Ok?,” and “No Hard Feelings” show a band at the apex of their ability.

The feelings on Indigo De Souza’s sophomore album, Any Shape You Take, are often intense and borderline violent. “F*ck me, 'til my, brains start dripping/ Down to, the second, floor in our home,” goes, memorably, one of the lines on the record’s gory and great closer, “Kill Me.” There’s plenty of contemplation about death and dying across the album’s 10 spirited, big-hearted songs — but also friendship, community, togetherness, and such strong feelings of love it feels like death itself all over again. It’s one of the best label debuts of this year, and raises De Souza as a promising star in the making.

Lana Del Rey is our nation’s poet laureate and a true lady of the canyon. Chemtrails Over The Country Club is some of her finest songwriting to date; every new Lana era is one in which she trusts herself more, and with Chemtrails, she invites her listeners to do the same. As for me, I’ll see you all down at the Men in Music Business Conference!

Doss was not playing around when she named her EP 4 Hit New Songs. Each track from the cult-favorite DJ’s project is euphoric and expansive, and best experienced at full-volume on a meandering walk for times when you’re not dancing but your heart is at a rave.

Happier Than Ever, Billie Eilish

Remi Wolf has done it again. Much like I'm Allergic To Dogs!, this new album gives off the same nostalgic “super emo, aqua girl with the rising Leo” energy, but ups the ante a bit. It’s a great album to bop around to while doing your errands on a Sunday afternoon, and very much contributed to my "Neo-psychedelic" Spotify Wrapped this year. “Liquor Store,” “Anthony Kiedis,” and “Sexy Villian” are a few of my favorite tracks.

Best paired with a glass of wine (or several, if we're being honest) — the Deluxe edition of Sound & Color will make you yell-cry the lyrics, if that's your thing. Just queue up “Over My Head (Live From Capitol Studio A).”

Romeo & Juliet vibes + post-divorce Kacey = one hell of a Sad Girl Fall. The storytelling on this album is immaculate and I didn't expect anything less from the country singer. Even though songs like “Simple Times” and “Breadwinner” are my favorites, I will only listen to star-crossed in order, and from beginning to end without breaks. It really is the type of album that you want to devour in its entirety.

Måneskin's fame catapulted when the group won Eurovision 2021 with “Zitti E Buoni,” but it didn't stop there — their cover of “Beggin’” became a hit on TikTok. To really understand what the Italian rock group brings to the table, you need to listen to their debut album. Lead singer Damiano David has the voice of a rockstar, snarls and growls included. The track "Coraline" is reminiscent of ‘90s grunge, while "I Wanna Be Your Slave" is the perfect song to belt out during karaoke.

I know this isn't technically a *new* album, but the excitement around the release was one of the biggest moments in entertainment this year. Newly released songs and 10-minute version of “All Too Well” aside, hearing the album sung by an older, more mature Swift definitely added a punch that wasn't there in the original masterpiece. I didn't think it was possible to make something perfect even better, but blondie did it.