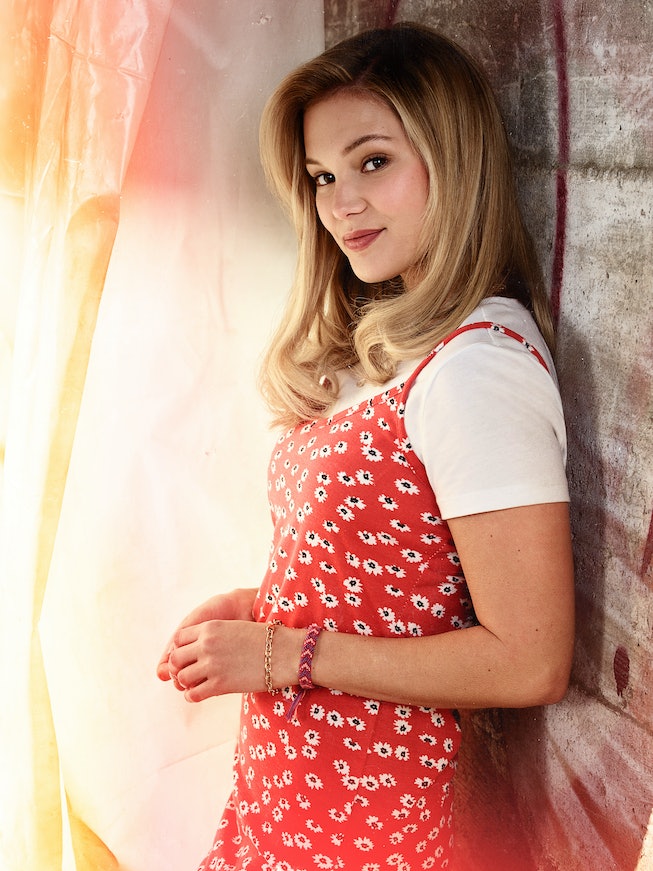 Olivia Holt is definitely not ignoring you. It's just that the 23-year-old actor is trying to remain present in her daily life. It's a conscious effort to make more eye contact and spend less time under the influence of social media. "I'm the asshole friend that's like, 'If we go to dinner and you pick up your phone, I'm leaving,'" she tells NYLON over Zoom from her home in Los Angeles.

Still, even Holt isn't immune to the enticing pull of an incoming notification. "It's a habitual thing, she says, looking directly into the screen that connects us. "We've trained ourselves to do that, especially over the last year. We are connected to our devices. It can be incredibly unhealthy. I try really hard to not let it control me."

She was made acutely aware of her dependency on devices while filming Freeform's Cruel Summer in Dallas, Texas, late last year. Set in the '90s and spanning the same days in 1993, 1994, and 1995, the young adult thriller follows two teen girls whose lives are mysteriously intertwined after one is kidnapped (Holt as Kate Wallis) and the other coincidentally takes over her life (Chiara Aurelia as Jeanette Turner). For Holt, who was coming off an electrifying two-season run on Marvel's Cloak and Dagger, the show's nonlinear structure and nostalgic setting is what initially drew her to the role of pretty queen bee Kate Wallis.

"There's so much television and film that I see now where teenage characters are on their phones in scenes while having conversations," she says. "They're multitasking in a way that's very authentic to today, but it's also like what is going on? What makes our show so unique is that we're all present. We're all having real human connections and conversation."

She didn't see much of herself in Kate at first — she was too popular, too perfect in '93 — but the more she read, the more she started to empathize with a young woman who feels misunderstood by everyone around her. After two scripts, she knew she had to play Kate. "If you look at her from the exterior, she's blonde, she has a hot boyfriend, and she's very wealthy. Her family seems like they have it all together," Holt explains. "But inside she's really struggling." That's an understatement. In the second episode, Kate discovers her mom is having an affair in '93, shattering the picture-picture image of her family and setting her on a dangerous path. In '94, she's working through some serious trauma and questioning her relationships. Can she trust her boyfriend? Are her friends really her friends? Why is she the only one suffering? By '95, she's mad at everyone, even herself.

"She isn't comfortable in her own skin," Holt adds. "That's what we all go through, right? That's what social media is. We find ourselves scrolling all day long, comparing ourselves to other people — and not just physically, but what their lives look like. Social media is a highlight reel. I relate to that so much. There's an aspect of what people only see, but they don't know what I've been through or what I struggle with. I think the show showcases that in a real way."

Kate's story is extreme. She was abducted by an older man she thought she could trust, her vice-principal Mr. Martin Harris (played by Black Lee), and the show details the ways in which he manipulates her. Holt spent months researching grooming, trauma, and, importantly, "what life looks like after going through that trauma." There are parts of Kate's abduction that are hard to watch, and according to Holt, that's all by design. "I want the audience to feel uncomfortable when they're in those scenes with Martin and Kate," she says. "I want them to feel like they shouldn't be watching this, that this shouldn't be happening. Yes, it's a psychological thriller and, yes, there's a mystery to it, and that's thrilling and exciting, but this is serious."

She worked with executive producers Tia [Napolitano], Michelle [Purple}, and Jessica [Biel] to make sure they were responsibly and accurately telling Kate's story, helping to flesh out the character in ways that required a young woman's perspective. "There were so many pieces of the puzzle that needed to be figured out [when she signed on]," Holt recalls. A question as simple as, "should Kate have press-on nails in '93?" turned into full-on character analysis. "All of those details are so important to the story," she says. "Come '94, she has gone through some serious trauma. She's been locked in a basement for months. She's going to be a completely different person. She's going to have a lot of misplaced guilt. But she'll eventually rise from the ashes come '95. That's such an incredible challenge as an actor."

It's no surprise that Holt holds a deep fondness for '95 Kate. She's bold, brash, and trusts her own instincts. She admires — no, envies — her resilience. "There's something about '95 Kate that is so special," she says, before conceding, "I feel like special is such a lame word to use because she's gone through so much, but the way that she forms her own opinions is just so striking. You can tell that she is going to be in such a better place. And she deserves that. I want to see Kate win."

For as empowered as Holt feels by Kate's journey, she hopes you feel it, too. "I want to play roles that are empowering and that people can watch and be like, 'I want to be more like her,'" she says. "If it's part of a story that will impact people in a positive way, then I'm all for it."

After all, those are the stories and characters that most influence her. The badass skaters of HBO's Betty partially inspired her to take up skateboarding last year. She was looking for an outdoor activity to do with friends, something that would untether her from her phone for a while. So far she hasn't been able to shred around Los Angeles quite like the women of Skate Kitchen, but she's making progress. "I'm not very good," she laughs, adding, "but I love it."

Then, she smiles: "It's a whole new version of me that I never would have expected for myself in a million years."

Cruel Summer is now streaming on Freeform and Hulu.