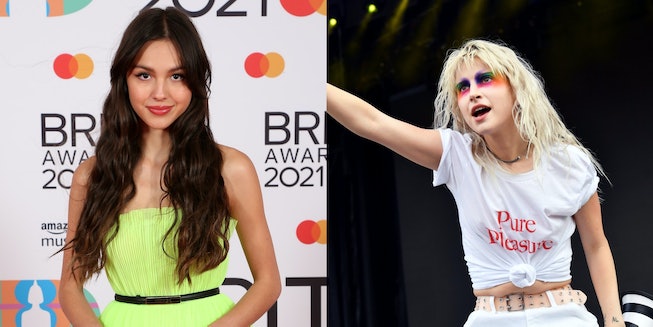 Olivia Rodrigo’s debut album Sour turned the High School Musical: The Musical star into an overnight pop-sensation. The 11-track record explores heartbreak through catchy lyrics that you can easily sing or cry along to, depending on your mood, and even received an SNL shoutout for its relatability. It was an instant hit. But now that Rodrigo’s earned her spot as this generation's punk-princess, she’s editing the album to credit it’s influences with the most recent amendment for “Good 4 U” going to Paramore’s Hayley Williams and its ex-drummer Josh Farrow.

The two musicians are now listed as co-writers for the beloved pop-punk single. The song was released in May, and has been sitting on Billboard’s Top 100 ever since. But with its popularity, came the realization that it sounds a lot like Paramore’s “Misery Business.”

“Good 4 U” has a similar melody to the early 2000’s track, and it’s not a coincidence. According to Variety, Rodrigo interpolated or sampled the song’s melody, and added her own spin, rather than borrowing its direct recording.

The singer has admitted to doing this before with another track on the album, “One Step Forward, Three Steps Back,” and ended up belatedly giving Taylor Swift and Jack Antonoff writing credits for the song which samples Swift's Reputation track “New Years Day.” Swift and Antonoff also received writing credits for inspiring Rodrigo’s “Deja Vu,” with “Cruel Summer.”

Though Swift has publicly supported Rodrigo’s music, another famous blonde wasn’t as flattered. Courtney Love criticized the album art for Sour, and accused Rodrigo of copying Hole’s 1994 Live Through This album cover. However, both covers ultimately pull inspiration from the horror-flick Carrie, and Rodrigo claims she, “didn’t really think about it.”

Rodrigo was also accused of using a guitar riff from Elvis Costello’s track, “Pump It Up,” on her single “Brutal,” but the English-songwriter didn’t seem to care. On Twitter he wrote, “This is fine by me. It’s how rock and roll works. You take the broken pieces of another thrill and make a brand new toy. That’s what I did.”

A source also told Variety that Williams’ and Rodrigo’s teams were in touch before “Good 4 U” was released, though that didn’t stop Paramore’s publishers, Warner Chappell Music, from posting a celebratory (and maybe semi-shady?) Instagram story regarding the change.

“A huge shoutout to our writers Hayley Williams & Joshua Farrow,” they wrote. Williams reposted the story and said, “Our publisher is wildin right now.” Neither Rodrigo nor Williams has elaborated on the matter, so hopefully it’s all just water under the bridge.