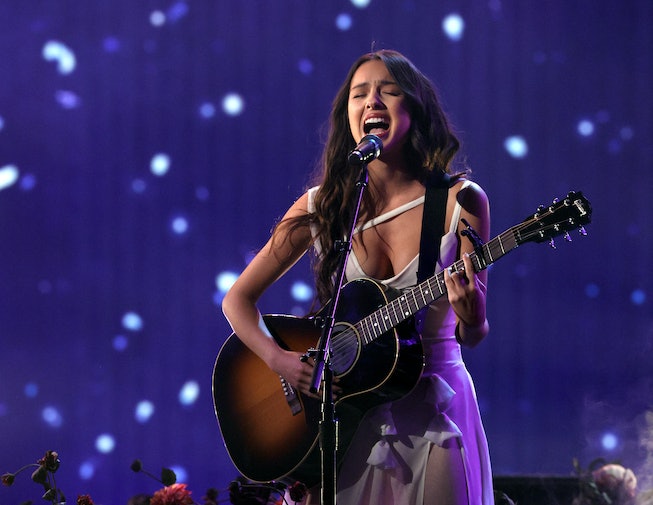 Every year the American Music Awards celebrates the greatest artists in the industry, with a mix of sought-after accolades earned entirely through fan-voting and plenty of live performances. This year, Olivia Rodrigo arrived with the most nominations of the night, and proved her talent with a stunning live rendition of her hit-song “Traitor.”

Though never explicitly stated, the break-up anthem has been linked to her alleged ex-boyfriend and High School Musical: The Musical co-star, Joshua Bassett. Whether it’s about him or not, the song details Rodrigo’s experience handling a breakup, after her former lover moves on too quickly. “Traitor,” along with the other tracks on her breakout-album, Sour, has received critical acclaim for its raw yet relatable lyrics. Last night's performance is just another example of Rodrigo’s innate ability to connect with listeners through her music.

Rapper Cardi B, the award show’s host, introduced Rodrigo by recounting her own first heartbreak. Then the singer entered the stage through a white door, while wearing a full-length gown and holding an acoustic guitar. The set was covered in flowers while the backdrop resembled the night sky. When the track began, Rodrigo sang a stripped-down rendition of the song, strumming along on her guitar, while a small band accompanied her in the background.

During her acceptance speech she thanked the crowd for supporting her burgeoning career. “Thank you so much to the AMAs and to the fans who voted for this award. It means so much to me,” she said. “Writing songs is my favorite thing in the world and I am so grateful for everyone who has embraced my music.”

Since its release earlier this year, Sour has topped the charts and made Rodrigo one to watch. She’s been dominating the awards season, and her music has even gotten Taylor Swift's stamp of approval. Though she only has one album out, it's clear that Rodrigo is one of the top-voices of her generation. Watch her full performance of “Traitor” below, and see for yourself.