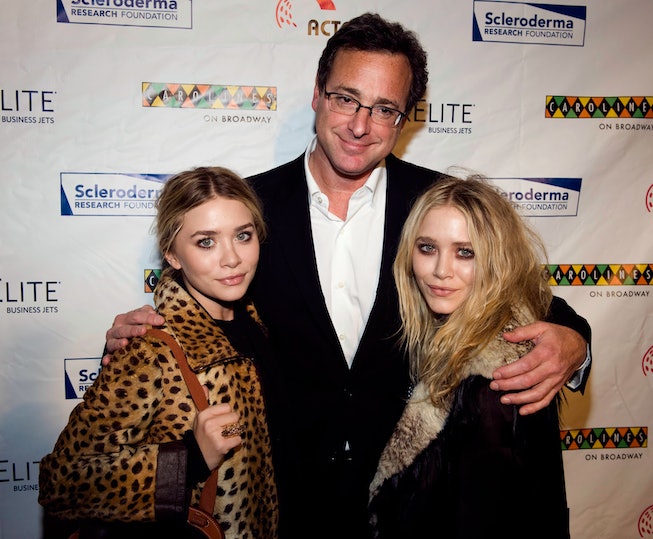 Bob Saget — the famed comedian and actor best known for his role as dad Danny Tanner on Full House — has died. Saget's family confirmed the news to CNN on Sunday. “We are devastated to confirm that our beloved Bob passed away today. He was everything to us and we want you to know how much he loved his fans, performing live and bringing people from all walks of life together with laughter,” they said. “Though we ask for privacy at this time, we invite you to join us in remembering the love and laughter that Bob brought into the world.”

Upon hearing the news, celebrities have released statements honoring Saget’s memory. The Olsen Twins — who both played Michelle Tanner, the youngest child on Full House for eight seasons — provided a heartfelt tribute to Page Six. “Bob was the most loving, compassionate, and generous man,” they said. “We are deeply saddened that he is no longer with us but know that he will continue to be by our side to guide us as gracefully as he always has.”

John Stamos, who famously played the charismatic Uncle Jesse on the show, tweeted, “I am broken. I am gutted. I am in complete and utter shock. I will never ever have another friend like him. I love you so much Bobby.

“I don’t know what to say. I have no words,” she wrote. “Bob was one of the best human beings I’ve ever known in my life. I loved him so much”

Pete Davidson also released a touching statement. The SNL star does not have social media, so he asked his coworker Dave Sirus to share his condolences on Instagram. “Just wanted you guys to know that Bob Saget was one of the nicest men on the planet,” Davidson wrote.

He then shared how Saget was supportive to him during a mental health crisis. “When I was younger, and several times throughout our friendship, he helped me get through some mental health stuff. He stayed on the phone with my mom for hours trying to help in any way he can — connecting us with doctors and new things we could try. He would check in on me and make sure I was okay.”

“I love you Bob and it was an honor to know you,” Davidson concluded. “Thank you for your kindness and your friendship. My condolences to the family.”

Saget (65) had just kicked off his “I Don’t Do Negative” stand up tour in Florida before he was found dead in his hotel room at the Ritz Carlton. Foul play is not suspected, though a formal cause of death hasn’t been released. The actor is survived by his wife, Kelly Rizzo, and three daughters, Aubrey, Lara, and Jennifer.