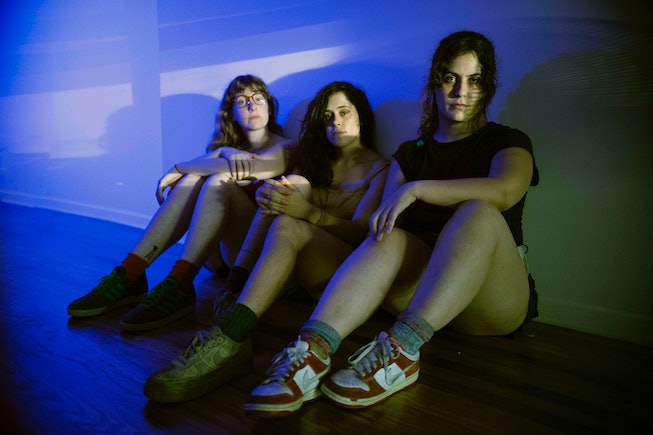 Like their name suggests, NYC-based band Palberta is made up of best friends Nina Ryser, Ani Ivry-Block, and Lily Konigsberg. Together, they've been making some of the city's most experimental, unruly, and genuinely delightful indie rock for some years now. Their songs — which usually burst and fizzle out in a minute or less, and are an unpredictable tangle of guitar, clunky drums, and punk three-part harmonies — have garnered them a small but dedicated following. Their unconventional charm and chaotically jubilant nature have made them long-stays in the scene.

Recently, the trio have been gearing up to share their eighth studio album, Palberta5000, a project that's turning out to be an experiment on what the band could sound like if they tried to color within the lines. If their latest single "Corner Store" is any indication, it turns out they're just as good. With its steady guitar and unpolished harmonies about seeing a friend at the local bodega, the track keeps all of its Palberta weirdness within a more conventional song structure. Plus, at just over three minutes, it's the longest we've heard them play yet.

"'Corner Store', a song we’ve been playing live for a while now, has gone through many transformations over time," the band writes in an email. "It culminated in this final version once we discovered that it needed an a capella breakdown that would slowly bring us back into the groove. Though it’s a classic Palberta move to fit in a 3-part harmony whenever we get the chance, it felt crucial. This song tells a story about strolling to the corner store, a sacred place we all know and love, on a Sunday afternoon to meet your friend and you see them on the front of the Sunday Times. And once they arrive, you do a double take and say to them, 'Hey! No way! I saw you at the corner — I saw you on the front of the Sunday Times!'"

Hear "Corner Store" below, and read on to learn more about the band.

NINA: Right now I am at home working my standardized patient job over Zoom & simultaneously answering this email on the sly. My dog is lying on my feet.

ANI: Currently, I am in my bedroom battling the insanely loud and rattling construction zone happening on the adjacent roof.

LILY: Writing music in a walk-in closet in a mysterious, ghostly mansion.

Palberta5000 is your fifth studio album. What's the biggest change the band has undergone since its inception?

NINA: Palberta5000 is actually our 8th studio album if you classify the portable home-recording set up as a studio album :) The biggest change is probably that we've gotten way better at playing our instruments over the years.

ANI: Yup. Definitely our 8th studio album. We have moved more towards melody and harmony since the last two albums.

Your newest singles are longer than your usual songs. What's the toughest part of writing longer songs?

NINA: I think we naturally write short songs, so a lot more deliberation and intention goes into writing longer songs. So even though it feels a bit against our nature, it's a good way for us to challenge our songwriting process.

ANI: Besides what Nina said, writing longer songs can entail more lyric writing which we often do in some type of Frankenstein collaboration between the three of us so that takes a lot of brain work and compromise.

LILY: It also just seemed to happen naturally this time. We were ready for that two-and-a-half to three-minute pop banger!

What's the last album you all played in full and really enjoyed, and why did you like it?

Nina: I have Diamond Life by Sade on cassette that I've been rocking in my car a lot these days. Every song is a banger, like "Hang On To Your Love." I also love her cover of "Why Can't We Live Together." Her voice is incredible and I love her lyrics.

Ani: Curtis by Curtis Mayfield. It's a potent album for all times but particularly these times. I like to listen to this album and cry and dance. "The Making of You" is a beautiful song. He has the voice of an angel. And the horn arrangements are perfect. And he is one of the greatest lyricists.