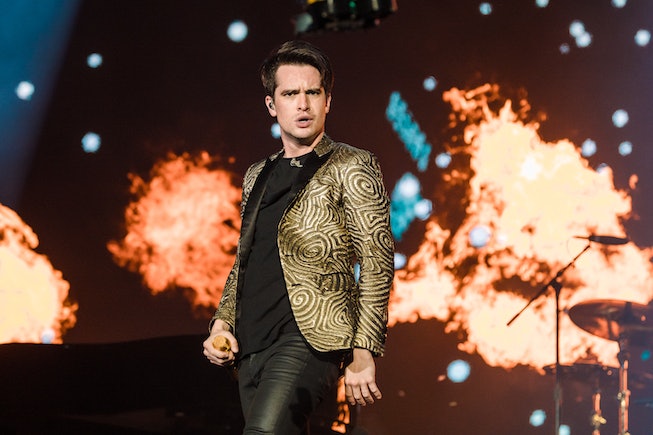 It’s been four years since Panic! At the Disco released their last album, 2018’s Billboard chart-topping Pray for the Wicked. This is the longest break the band has ever taken between studio projects since releasing their debut, A Fever You Can’t Sweat Out, in 2005 — so it makes perfect sense that the multi-platinum art-rock collective have been secretly cooking up something new.

Now, we’ve finally been blessed with a taste of what’s to come. In just a few short days, Panic! At the Disco will release their seventh studio album, Viva Las Vengeance. The album title is a subtle ode to the band’s birthplace of Las Vegas, which, as a city, has consistently served as a major influence on their sonic palette and their thematic interests. This trend has continued with the new music, as well. In the last few months, we’ve been blessed with new songs “Viva Las Vengeance,” “Middle of a Breakup,” and “Local God,” and now, we’ve gotten the most recent offering, “Don’t Let the Light Go Out.”

Oh, yeah. Did I mention that the band is less than a month away from embarking on a massive worldwide tour, too? All this to say: it’s a really great time to be a Panic! fan.

Below, find everything we currently know about Panic! At the Disco’s next era.

When will Viva Las Vengeance be released?

After more than four years since their last project, Panic! At the Disco will release their seventh studio album, Viva Las Vengeance, on August 19, 2022 via Fueled By Ramen/DCD2 Records.

According to a press release, Viva Las Vengeance “shows a change in process” for the band and its preeminent frontman and songwriter Brendon Urie. “Having cut everything live to tape in Los Angeles alongside his friends and production partners, Jake Sinclair and Mike Viola, the cinematic musical journey is about the fine line between taking advantage of your youth, seizing the day, and burning out.”

Seventeen years after the band’s breakout debut album, Viva Las Vengeance will feature songs that “take an introspective look” into Urie’s relationship with his career, fame, love, and of course, the titular city of Las Vegas. “Viva Las Vengeance is a look back at who I was 17 years ago and who I am now with the fondness I didn’t have before,” Urie says of the new album. “I didn’t realize I was making an album and there was something about the tape machine that kept me honest.”

Can I hear anything from Viva Las Vengeance yet?

Luckily, yes. As part of the initial announcement for the new album, Panic! At the Disco released the lead single from Viva Las Vengeance, which also serves as the title track for the upcoming project. Described as “upbeat, driving, and anthemic,” the new song thrives on its catchy hook, which finds Urie repeating the phrase “shut up and go to bed.”

The single comes with a cheeky new music video, where “one of today’s top acts” perform “the titular song of their incredible new album” on an unnamed television program. In the Brendan Walter-directed visual, Urie injures his hand while playing the piano and has to be bandaged up while still performing the song — and later playing the guitar (ouch) — to a live audience.

Check out the new single and it’s accompany video below.

With less than a week until the release of Viva Las Vengeance, Panic! At the Disco has shared a video for the album’s latest single (and last before its official release). Titled “Don’t Let the Light Go Out,” the third Viva Las Vengeance single finds Brendon Urie mourning the recent end of a relationship as he wonders “who’s going to drive [him] home tonight” and “who’s gonna argue till they win the fight.” The accompanying black-and-white video, which was again directed by frequent collaborator Brendan Walter, is fittingly somber, with Urie forlornly playing his guitar in an empty car as visions of a former lover haunt him.

Watch the video for “Don’t Let the Light Go Out” below.

How many tracks are on Viva Las Vengeance?

Panic! At the Disco’s upcoming album will feature a total of twelve songs, the most tracks to appear on the standard edition of a Panic! At the Disco album since 2008’s Pretty. Odd. In addition to the lead single title track, Viva Las Vengeance will also feature songs like “Middle of a Breakup,” “God Killed Rock and Roll,” “Something About Maggie,” and “Sad Clown.”

View the full tracklist below.

How can I hear the Viva Las Vengeance tracks live?

If you’re already itching to hear some of this new music live, you’re in luck: Brendon Urie & Co. will be hitting the road on a massive worldwide arena tour in support of their upcoming project. The band will be taking special guests like MARINA, Jake Wesley Rogers, and Beach Bunny along for the ride.

Hitting 40 stops across America and Europe, “The Viva Las Vengeance Tour” will kick off this September in Austin, Texas and continue until March 2023, when the band finishes in Manchester. The tour will find the band revisiting previous venues, including Madison Square Garden in New York and The O2 in London. (For those seeking a thematically accurate live experience, the band will also play Viva Las Vengeance at the T-Mobile Arena in Las Vegas.)

View all the tour dates below. Find tickets here.

NEXT UP
Culture
Aly & AJ's "With Love From" Video Is A Postcard Of Melancholy
Entertainment
Megan Thee Stallion Says A New Album & World Tour Is Coming In 2023
Culture
Mowalola Teams Up With Bratz For A Daring, High Fashion Collection
Fashion
Coach Reissues Y2K Favorite Demi Bag