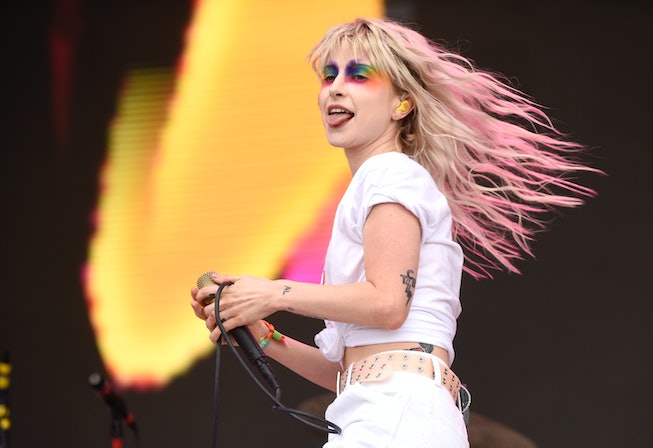 Paramore’s next era is nearly here. After years of rumors about their long-awaited comeback, the band officially kicked into promo mode earlier this month as they unleashed a slew of hints, teasers, and mysterious dates onto eager and awaiting fans. Now, there’s finally an answer on when new music will arrive; their first song in five years, “This Is Why,” from their upcoming sixth studio album, will be released on Sept. 28.

Fans might’ve already gotten a taste of the upcoming track. On Sept. 8, the band teased a 10-second video previewing an unreleased song, likely “This Is Why.” The video looked like it was shot on a low-quality camera — or one that was purposefully tampered with — but it appeared to show the members’ hazy silhouettes sitting in front of a bright studio computer, ostensibly working on new music. In the background, Hayley Williams could be heard singing an unreleased song. The audio is a bit muffled, but it was clear enough to detect what Williams was belting over its upbeat melody: “Far, I’m far, so far, from the frontlines/ Quite the opposite I’m safe inside” — lyrics that sound like an allusion to 2020’s lockdown. Triumphantly, guitars kick in at the last second.

Prior to that the band has already begun teasing a slew of other clues about the new album. Their official website noticeably got an update, and now shows a series of mysterious dates in September with corresponding words like “blank,” “wr0ng,” “L A,” and “start spreading the news.” One of the links leads to Paramore’s new Discord channel, and fans interpreted the other dates as a possibility that the band would release something new on Friday, Sept. 9, a new music Friday. Midnight came and went, however, and there was nothing new from the band. Williams, Taylor York, and Zac Farro also updated their individual Instagram profile photos; they can each be seen with their cheeks pressed against a pane of glass.

Paramore’s upcoming sixth studio album will follow 2017’s acclaimed, After Laughter. The band has already extensively teased the project to be a return to a guitar-forward sound, though not exactly in the same direction as their pop-punk roots.

“The music we were first excited by wasn’t exactly the kind of music we went on to make,” Williams said in an interview. “Our output has always been all over the place and with this project, it’s not that different. We’re still in the thick of it but some things have remained consistent from the start. 1) More emphasis back on the guitar, and 2) Zac should go as Animal as he wants with drum takes.”

Williams has also cited the English band Bloc Party as a major reference point for the new record.

While there’s still no release date for the album, its arrival feels to be more imminent than ever. The band will be heading on an intimate North American tour come October, playing a mix of festival shows and mid-sized theaters and amphitheaters. If we’re lucky, we’ll have new music to learn by then.

This article was originally published on Sep. 9, 2022