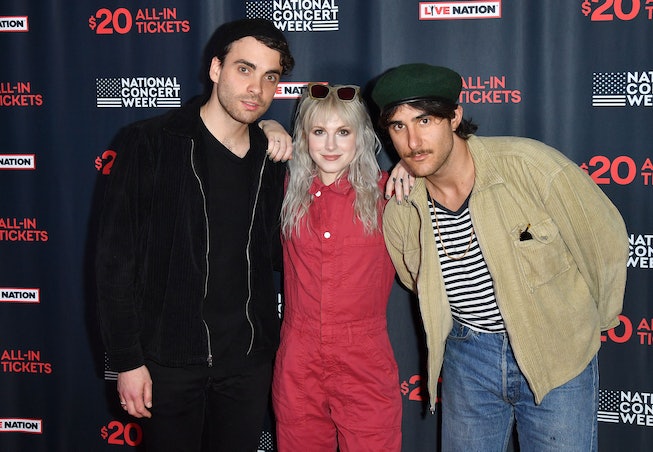 They hinted at a comeback in 2021 and, now, it’s officially been confirmed — Paramore is back in the studio and hard at work on their sixth studio album.

Select details about the new project are already coming to light and the latest dispatch stems from front-woman Hayley Williams herself, who has revealed a major inspiration behind the upcoming album. During a recent episode of Williams’ new radio show for BBC Sounds, Everything Is Emo, the singer revealed that the English rock band Bloc Party is the “number one reference” for the album.

Describing the impact the band has had on her as an artist and Paramore’s new album, Williams said, “There was such an urgency to their sound that was different to the fast punk or the pop punk or the like, loud wall of sound emo bands that were happening in the early 2000s. They had their own thing and it was so unique and so dynamic, and it really stuck with us. And I’m really really thankful for this band, I’m so thankful that they’re back, they’re playing shows they’re putting out great songs, and it just makes me feel even more excited to get back out into the world, and maybe cross paths with the band that has been a huge part of our story from day one.”

She also shared her own personal memories listening to Bloc Party while learning to drive. Using the money she received from Paramore’s first publishing advance, Williams paid back her mom for her first car, a Mazda 626 that she covered in stickers. “Bloc Party’s Silent Alarm was always on in the car. It was a favorite, and there’s really not a bad track on it,” she said.

This new detail adds more definition to what we already know about Paramore’s highly-anticipated next album. In a previous interview with Rolling Stone, the veteran pop-punk band — Williams, Taylor York, and Zac Farro — revealed that they’ve been deep in the throes of recording their forthcoming next album (still untitled and without a release date), their first in nearly five years since the release of their smash-hit 2017 record, After Laughter. Though Williams intimated in 2020 that the group’s next record would return to a guitar-led sound, leading many to believe the band would be re-mining the pop-punk and emo sonics and aesthetics of their heyday, she told Rolling Stone that the album may not be the “comeback ‘emo’ record” that many have come to expect — though the guitar will still be at the forefront.

“The music we were first excited by wasn’t exactly the kind of music we went on to make,” Williams told RS. “Our output has always been all over the place and with this project, it’s not that different. We’re still in the thick of it but some things have remained consistent from the start. 1) More emphasis back on the guitar, and 2) Zac should go as Animal as he wants with drum takes.”

In that way, Williams added, you can expect an album that might still feel nostalgic but will sound fresh, and chart into new sonic territory for the group.

“We wrote and tracked something we loved and it actually surprised us,” said Williams to RS about the band’s first studio session together in years. “We kept joking it was all downhill from that point, but thank God we’ve been surprised a lot throughout this whole thing. I’m always waiting for the moment for us to know we’re onto something new and we’re not just rehashing the same sh*t. It was ‘Ain’t It Fun’ for our self-titled record, and ‘Hard Times’ or ‘Told You So’ for After Laughter. It’s not about it feeling like a hit so much as it’s a scary, exciting feeling that you’re treading uncharted waters. It keeps you curious. We got to feel that feeling early on this time.”

According to the band, they began the record recording process in Nashville and have since moved to a studio in California, spending most of their time ordering PostMates, playing ping-pong, and, in Williams’ case, trying to convince SZA to spend time with them in the studio. (Williams has covered several of SZA’s songs in the past including “Drew Barrymore.”)

“We go into the studio around 10 a.m. and leave around 7 or 8 p.m. like a bunch of dads,” Williams said. “I’ve been trying to get SZA to come hang with us ‘cause I want to be friends in real life but we leave the studio to eat and sleep and she’s still carpe-ing the diem.”

Elsewhere in the interview, Williams mused about the future of Paramore as a project that its current members will always return to. While they may go their separate ways for years at a time, tending to their own businesses and, in Williams’ case, embarking on a successful solo journey — they’ll always find their way back to each other, and the music. “Paramore feels like home,” Williams said.

Paramore’s last album, After Laughter, marked a new sonic era for the group with its synth-pop sound. The album was widely acclaimed, with critics noting the band’s growth and honest songwriting about depression, anxiety, and moving forward. The record was the first album involving Farro since he left the band in 2010 and the first without ex-bassist Jeremy Davis.

See NYLON’s list of the most-anticipated albums of 2022, including Paramore’s upcoming record.

This article was originally published on Jan. 11, 2022