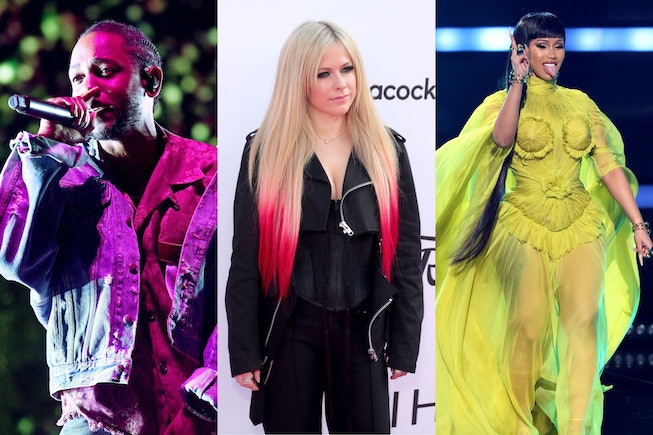 As 2021 comes to a close, we at NYLON are already looking ahead to the new year. With the live music industry more or less back on its feet, 2022 is already looking to be a stacked year of releases from our favorite veteran artists, indie breakthroughs, and the moment’s biggest pop stars. The grind doesn’t stop — and in 2022, it’s only getting crazier. Below, find the 18 album releases we’re most looking forward to, from Avril Lavigne’s pop-punk return and Mitski’s long-awaited third album, to very possibly new music from Kendrick Lamar and Sky Ferreira.

Aaliyah’s first posthumous album, Unstoppable, is set to arrive sometime in 2022. It’s lead single, “Poison” featuring The Weeknd, is already out, and Blackground Records founder and Aaliyah’s uncle Barry Hankerson has already confirmed that the project will include features from Drake, Future, and others.

The Queen of pop-punk is making her return to music in February 2022 with a brand new album of pop-punk tunes. What can we expect from it? Well, according to Lavigne herself in her recent NYLON cover story, it’s the album she’s “wanted to make for [her] whole career.”

The acclaimed wild-folk quartet will release its fifth studio album, Dragon New Warm Mountain I Believe In You, on February 11, 2022 via 4AD. Its selection of sprawling pre-album singles is already proving it to be an electrifying new chapter for the group.

After two years of standalone smash hits — “WAP” in 2020 and “Up” in 2021 — Cardi B has finally promised that her long-awaited follow-up to Invasion Of Privacy will arrive in 2022. While its finer details have yet to be set in stone, it seems she’s as eager as us to get it out into the world: “I gotta put out this album next year,” she said in a recent post to Instagram.

While no official announcements have been made, Caroline Polachek sure has been moving like she’s going to be releasing a project very soon. In 2021, she released the stellar standalone single, “Bunny Is A Rider,” and pretty much spent the rest of the year touring and performing. We’re no Magic 8 Ball, but we say all signs point to yes: expect her second studio album in 2022.

Charli XCX will release her fifth studio album, Crash, on March 18, 2022. It’s expected to be a major project for the pop star as it marks the last album she’ll be releasing under her current recording contract with Atlantic Records. “[The album will signal] a new chapter for me in which I embraced all that the life of a pop figurehead has to offer in today’s world — celebrity, obsession and global hits,” she’s said of the project in a press release.

It’s not an album but a mixtape. FKA twigs will release Capri Sun, her first new music since 2019’s Magdalene, on January 14, 2022 via Young Recordings/Atlantic. Going off the slinky and mainstream pop-leaning lead single “Tears In The Club,” featuring The Weeknd,” it’ll likely prove to be another glowing artistic evolution for the singer and dancer.

Alas, Grimes’s next era is nearly upon us. Book 1, the auspicious title of the avant-pop artist’s highly anticipated next album (teased to be a lesbian AI “space opera”), is expected to come out in 2022, though its exact release date still hasn’t been confirmed. The album’s already shaping up to be a spectacular new age for Grimes, with lead single “Player Of Games” being one of her most cinematic, dynamic, and stylistic works yet.

2022 will mark five years since Kendrick Lamar released his last studio album, DAMN., in 2017. While it’s true that nothing has really been confirmed about when his next album will arrive, whispers and rumors point to the new year as a promising shift in the tide. Perhaps no indicator is stronger than what the man himself posted to a website in August 2021, in which he revealed he was working on his “final album for TDE,” and that he’ll be seeing us “soon enough.” We’re taking that to mean 2022.

Good things come to those who wait and we can only assume Lizzo’s next album is what’s waiting for us over 2021’s horizon. The superstar (and TikTok queen) gave the world its first glorious taste of the highly-anticipated record in 2021 with the huge-sounding and Cardi B-assisted first single “Rumors.” Let’s just hope it’s no rumor that the rest of the album will arrive in 2022.

If its brooding and cathartic lead single “papercuts” is any indication, Machine Gun Kelly will be vying for his next No. 1 album with his upcoming project Born With Horns. He’s working closely again with Travis Barker, and the music — which he’s described to be “guitar heavy” but with a darker sound than Tickets To My Downfall — will likely be here sooner than you think. “The second you open your eyes and it’s 2022, you’ll have something to listen to,” he’s teased.

It would be an understatement to say anticipation is high for Mitski’s sixth studio album, Laurel Hell, landing on February 4, 2022 via Dead Oceans. Since the release of her 2018 breakthrough album Be The Cowboy, and subsequent social media hiatus, the indie-rock singer has reached idol-levels of fandom. But judging by the pre-release singles, “Working For The Knife,” and “The Only Heartbreaker,” her art has remained as sharp as ever — a sure-as-anything omen that 2022 will be her biggest year yet.

After a brief solo stint, Hayley Williams and her longtime Paramore bandmates are reportedly back in the studio, hard at work on their next album. The band’s last record together was 2017’s bubbly and bright After Laughter, and while there’s no other details yet about their forthcoming new project it’s definitely set to arrive in 2022. After all, “Paramore can’t be ‘on a break’ forever now can we,” Williams teased this past year.

Yes, this is the second year in a row we’ve tried to manifest R9 and yes, we’re going to keep doing it until it happens.

The countdown has begun to Rosalía’s third studio album. Four years after the release of the Spanish flamenco star’s breakthrough record El Mal Querer, a project that told fiery stories of tragedy, heartbreak, and revenge against the dramatic backdrop of flamenco — Rosalía will return in 2022 to deliver its long-awaited follow-up, Motomami. There’s no release date for the project yet, but a brief butterfly-filled teaser, and its saucy, bachata lead single with The Weeknd, indicate that the upcoming record will usher in an exciting sonic pivot for one of Spain’s biggest stars.

It’s been a long time coming for rap sweetheart Saweetie, who sauntered onto the scene with the Khia-flipped anthem “Icy Grl” back in 2018. She’s been teasing the release of her debut album, Pretty Bitch Music, for years now, and though a (very public) break-up, global plague, and other factors may have delayed its arrival, she’s promised it will finally drop in 2022. Until then, catch us in the car with our besties yelling out every word to her very excellent single “Best Friend.”

The world has been waiting for Sky Ferreira’s next album since as early as 2013, and for nearly the same amount of time the singer has been promising its imminent arrival. On December 17, Ferreira posted on Instagram that it’s “actually coming out this time” in 2022. Call us suckers, but we’re still holding out hope.

Which album will Taylor Swift re-record next: Taylor Swift, Speak Now, 1989 or Reputation? Whichever one it is, it’ll likely land in 2022 if she keeps up her current pace of unleashing two Taylor’s Versions a year.

There’s no rest for the wicked, nor The Weeknd, apparently. Since his long, victory lap run around After Hours in 2020 (no matter it didn’t get a Grammy nomination), Abel hasn’t left the public eye for more than a few months, appearing on collaborations and countless features over the past year (just count the amount of times his name shows up on this list alone). Now, his next album — which he’s teased to be “Quincy Jones meets Giorgio Moroder meets the best-night-of-your-fucking-life party” record — will likely arrive in 2022. And he’s pulling no punches; its intoxicating lead single, produced by the pop legend Max Martin, and has already left us wanting more.