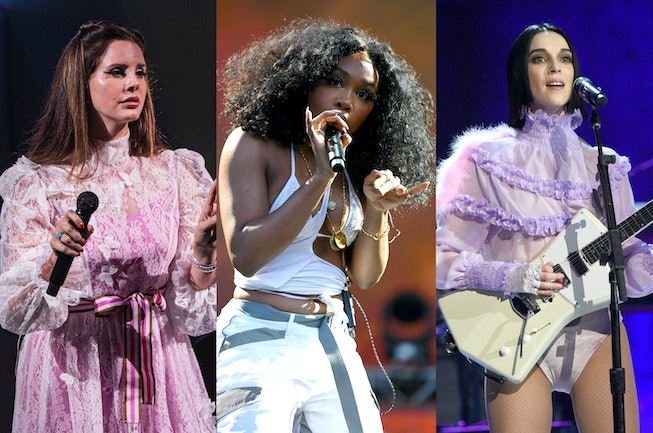 Goodbye 2020, and hello to 2021 — and, hopefully, a year of album rollouts that won't get interrupted by (another) global pandemic. Of course, the current crisis is far from over, but the music industry waters seems to have stabilized. Many highly-anticipated albums that were postponed in 2020 have now found their way onto the 2021 calendar, like Lana Del Rey's Chemtrails over the Country Club, and Drake's Certified Lover Boy. Below, we've rounded up the 11 major releases that you should be paying attention to in 2021, from possible new Kendrick Lamar, and Lorde to Doja Cat and St. Vincent. (And because we're optimists, yes, Rihanna's on this list.)

It's been five long years since Adele released her last masterpiece, 25, but new shifts in the wind indicate that the dry spell may finally end this year. Despite the fact that her manager has been teasing a new Adele album for a while now, the singer left a more definitive clue in an Instagram post after her stint hosting SNL back in October. "I’m going back to my cave now to be the (single) cat lady that I am! Peace out til next year," she wrote, indicating that she will surface sometime this year. Combined with the fact that she bothered to mention the album's existence at all during her SNL monologue leads us to believe that something should be arriving this year.

Although the many colorful singles from Doja Cat's last album Hot Pink seemed to rule all of 2020, the project actually dropped in 2019 — which means she's right on time to release her next album. And just like clockwork, the wacky pop star herself took to Twitter on January 5 to tease a new project called Planet Her, with possible features from Ariana Grande, Megan Thee Stallion, The Weeknd, Saweetie, and many more.

"#PLANETHER2021," she tweeted on Tuesday, before directing her fans to the list of people she's now following. "Following them for a reeeeaaaaasssoooonnn ;) Guess why."

Though there's no estimated arrival date for the project yet, it's safe to say that we're already waiting for her sequel to "Say So" with bated breath.

Drake announced Certified Lover Boy back in 2020, and is expected to release the project sometime in January 2021 via OVO Records. As for a specific date, fans are looking at this tweeted-then-deleted message from close collaborater Cardo Got Wings for clues.

Japanese Breakfast, the shoegaze-y pop project of Michelle Zauner, has been on hold for the past three years, as Zauner's busied herself with writing a memoir, scoring music for indie video games, and surfacing briefly to release some music she made with fellow musician Ryan Galloway under the name BUMPER. Turns out, in between all of that, she managed to crank out some new material for Japanese Breakfast too, announcing on Twitter on Tuesday that the band's next album will be out this year. "LP3 incoming," she tweeted. And with the highly-anticipated release of her book Crying In H-Mart expected in April, it's clear that 2021 will be a big year from Zauner.

Patron saint of sad songs and one-third of boygenius, Julien Baker will be releasing her third studio album, Little Oblivions, on February 26 via Matador. And it's already proving to be a highly emotional one, with its lead single "Faith Healer," released back in October, tenderly exploring the struggles around addiction and recovery.

Signs that Kendrick Lamar's next album will be arriving soon have amounted to brief mentions of studio time from his close collaborators, and fan-shot photographs that seem to show the rapper filming a music video — all while he and his label TDE have kept quiet since the release of 2017's Pulitzer-winning DAMN. Still, there's some reason to hold out hope that K Dot's next album can be expected sometime this year, if only because his label mate Ab-Soul recently confirmed that a Lamar project is indeed on the way.

The last we'd heard from Lana Del Rey about her seventh studio album, Chemtrails Over The Country Club, was that it'd been delayed 16 weeks from its initial estimated arrival of late 2020, thanks to complications in vinyl production. Instead, Del Rey approximated March 2021 as its new expected arrival time during an Instagram live from last November. "I can't get the record plants to open until March 5," she said.

In the meantime, she's been sharing the luxe and retro-themed mood boards around the project on her Instagram, and announced that its title track and music video will drop on January 11. Watch the music video for the first single she's already shared from the album, "Let Me Love You Like A Woman."

The biggest clue we have about when Lorde's next album might arrive is through her upcoming book, Going South. The elusive New Zealander announced the title late last year through one of her infamous fan email blasts, revealing that she (casually) took a trip down to Antactica back in 2019 and wrote a book about her experience there, which she will release in mid-February of this year. "The book is sort of a perfect precursor to the album in an abstract way," she write, implying that an album could be arriving in the second-half of the year...? Of course, it could also mean one or two years later, but we're trying to stay optimistic.

Shhh, we're manifesting R9 this year. Just let us have this.

It's been over three years since the rockstar released her last album, MASSEDUCTION (and no, it's still not called "Mass Education."). Since then, St. Vincent has been laying low — and for good reason it turns out. She's been working on her next album, its existence she finally announced at the end of 2020 on Twitter.

"The rumors are true. New record “locked and loaded” for 2021. Can’t wait for you to hear it," she tweeted. No info yet if it will continue on the pop-inflected rock she dreamed up with Jack Antonoff on her previous album, but we'll likely find out soon enough.

Finally, the question around SZA's long-awaited next album is no longer an if, but a when. Given that she released singles "Hit Different," and the delicate "Good Days" just before the close of 2020, it's clear that another brilliant satchel of heart-break, lonely girl R&B tunes are soon to be on the horizon. How soon? Well, Solana is still Solana — "I just want to do what I want without any pressure, without any hyper-conversation about it," she recently said about her creative process. Well, whenever she makes up her mind, let's just hope it arrives without any label drama.

NEXT UP
Entertainment
Meet Amy Allen, The Grammy-Nominated Songwriter Behind Pop's Most Honest Hits
Entertainment
Harry Styles Is Performing At The 2023 Grammys
Entertainment
Muni Long On The Grammys, Burnout & Not Worrying About The Labels
Entertainment
Annie DiRusso Makes Indie Rock For Your Growing Pains
Style + Culture, delivered straight to your inbox.