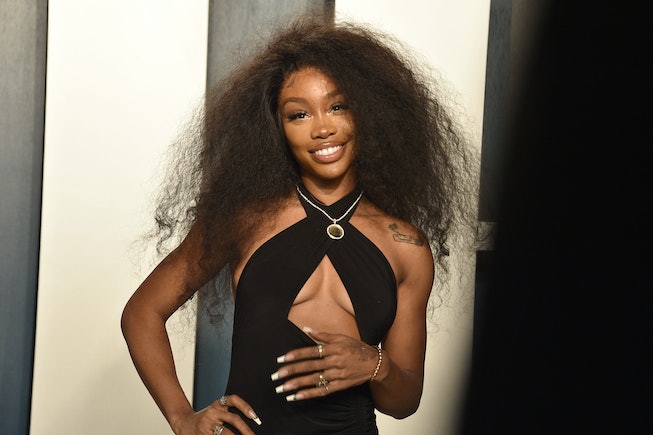 Like many people, there has been one specific song I've kept in heavy rotation ever since it dropped with a majestic accompanying music video last September: "Hit Different." The comeback single for the multi-Grammy nominated singer-songwriter SZA was a salve during those trying later months of the pandemic — and with its soothing beat and typically sultry vocals, the Ty Dolla $ign-featuring R&B song hasn't aged one bit over these past few months. The single made me and every other SZA fan in the world extremely excited for the singer's long-awaited sophomore album, which has been almost four years in the making. And while the Top Dawg Entertainment signee still hasn't given us anything close to an anticipated release date, we at at least finally have some word on what to expect from the still-untiled upcoming project.

SZA covers the February issue of Cosmopolitan, wearing a comfortable-looking matching Collina Strada top and skirt and sporting a huge pearly white smile that lets us know how at peace the artist currently is with her life. In the accompanying cover story, the artist opens up about her multiple Grammy snubs ("I’m just a girl from the ’burbs. I never had dreams of being nominated for a Grammy...So it's not a heavy burden," she says of her highly-contested losses), label drama, and her carefully-curated self-care routine ("I mix rose-hip, hemp, jojoba, and evening primrose," she says of her DIY intention oils) — all while doing yoga in the comfort of her own home.

Of course, all anyone really wanted to know about was the singer's forthcoming album, which she thankfully did open up about, even if only to give the teeny-tiniest of hints. "This album is going to be the shit that made me feel something in my...here and in here," she told writer Julee Wilson, while "laying one hand on her heart and the other on her gut." SZA continued, "That’s what’s going to go on the album. I’m making all different types of shit every day from different places in my spirit."

During her interview, the singer also expressed a sense of overall peace with her slow-moving creative process, telling Wilson, "Sometimes you just want to make something fucking awful just to rage against the system, but that’s not where I’m at. In this space, I just want to do what I want without any pressure, without any hyper-conversation about it."

While it's true that most of us would love to be having literally any conversation about a new SZA album, we must also respect the process of her rare talent and let SZA, who's recently been spending a ton of time shrooming, take her time and go at her own pace — or her label's pace, but that's a different story..

Besides, at least we finally have the full version of "Good Days."

Take a look at SZA's perfect smile on the latest Cosmopolitan cover below and read the full story here.