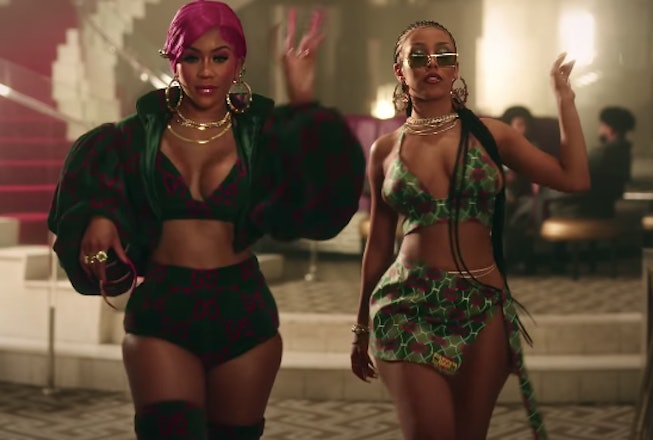 In a world where partying is pretty much illegal, it's frankly rude as hell for Saweetie and Doja Cat to drop a fun bop that demands ass shaking in a crowded place. The bop in question is Saweetie's latest single, "Best Friend," and it's all about the fun things people used to do with their best friends. It's called throwing salt in the wound, have you heard of it?

Thankfully, all is forgiven because "Best Friend" has an equally playful video to accompany the track. In the David Meyers-directed venture, Saweetie and Doja Cat spare no expense in having fun and look certified fly while doing it. The girls have the time of their life racing around town in their bedazzled Tesla, sunbathing by a luxe pool, and having a frilly sleepover — classic, All-American pastimes!

"That my best friend, if you need a freak / I ain't dumb, but motherfucker, she my Tweedledee," raps Doja as she props up Saweetie's breasts for maximum cleavage in a selfie. I can't think of a more beautiful representation of what it means to be a ride-or-die best friend than that.

"Best Friend" is off Saweetie's forthcoming debut album, Pretty B*tch Music. The LP has yet to announce a release date, but will be released via ICY and Warner and feature production from Danja, Lil John, Murda Beatz, and more.