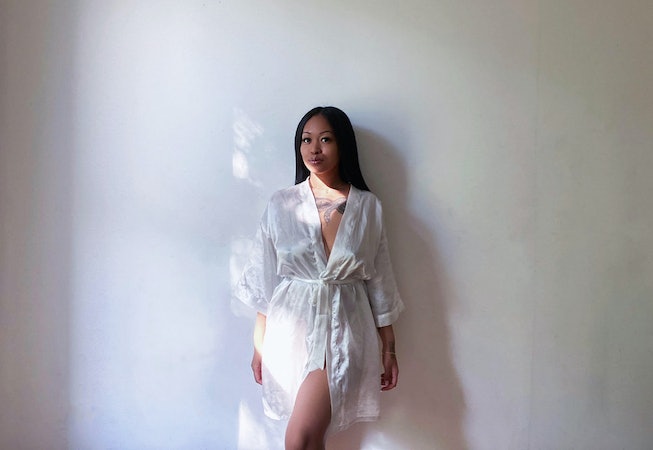 There is one place on the internet right now that somehow feels safer than all the rest — a respite from the relentless, reactive self-promotion parade that humans can't seem to help but prolong with every post, like and comment. That place is @PatiasFantasyWorld, the insanely prolific meme page curated by three friends, but led by the one and only Patia Borja.

A self-described "tech nerd, content producer and philanthropist," Patia runs her Fantasy World in addition to playing right hand woman to another iconic NYC fixture, Helen with the Gold Teeth. The Jacksonville, Florida native is usually up before you are — you can often count on at least three raunchy memes posted to your feed before 8AM, with commenters feeling attacked, disgusted or most likely, a bit of both. One such early morning, Patia filled NYLON i on what she's watching these days in quarantine. Read on for recommendations of her favorite films and TV shows.

Patia: I’ve been revisiting a lot of the movies that I grew up watching! Most of these are from around the same era (the only era that mattered when it came to film to be honest — the '90s/'00s). I didn’t have cable growing up so I watched those Saturday afternoon movies that came on The WB and sitcoms during the weekday evenings.

Alien — Honestly, my favorite movie in the entire world. I don’t know how to stop talking about it! I have probably seen this movie a million times. Literally. It's fucking weird and it's incredibly visually appealing. I even own t-shirts and books. I once told a guy I like that I could write a 20-page dissertation on why it is the best movie franchise ever and he looked at me like I was crazy. I guess behind the eyelash extensions and gel extension nails, I am weird. Anyway!

Alien is streaming on Hulu and Amazon Prime.

What’s Love Got To Do With It — Tina Turner is the queen of rock and roll, and Angela Basset is truly one of the greatest actors to ever exist. The story behind Ike and Tina is one that has helped me navigate my parents’ short-lived marriage at an early age, and also helped me navigate my own personal relationships as I got older. When I was growing up, the topic of domestic violence felt taboo. Movies like this and my own personal experiences really help solidify the fact that women are truly the most resilient beings, and no matter how much money or social capital a man can have, they really aren’t all that.

What's Love Got To Do With It is on YouTube and iTunes.

Waiting To Exhale — Do you remember watching those movies when you were a little girl and wishing you could live the lives of the women in them, even though they were going through shit your probably 8-year-old ass hadn't experienced yet? This was that for me. When Bernie (played by Angela Basset) burns her husband's clothes and cars because he left her for a basic white woman, I know every Black girl felt that. The energy she carried through that scene was probably the baddest bitch move I ever saw. Another notable scene: when Lionel and Savannah (played by Whitney Houston) are having sex and he keeps growling and she goes, “Now I'm a keeper at the damn zoo,” after they finish, hahahaha.

Waiting To Exhale is on Hulu, iTunes, Amazon Prime and YouTube.

The Fresh Prince Of Bel-Air — Legendary!!!!!!! What more is there to say!!!!! The most iconic sitcom to ever exist. All of Ashley Banks' outfits were my goals. I have vivid memories of laying on my mama’s lap on our cream colored floral print couch watching this show and giggling so much before bed.

The Fresh Prince Of Bel-Air is on iTunes, Amazon Prime and YouTube.

Set It Off — I LOVE a crime action movie! Add in the best cast ever? You have one of my favorite movies. Most movies centered around a heist are male-dominated, and Vivica Fox, Queen Latifah, Jada Pinkett, and Kimberly Elise really delivered and also probably made you want to say fuck it and actually go through with robbing a bank because fuck the system. P.S. I hated having a big forehead growing up, because I wanted braids just like Queen Latifah!!!

Set It Off is on iTunes, Amazon Prime and YouTube.

In The Heat Of The Night — My parents were really big on making sure the movies and shows I watched had leads that were filled by people of color. Sidney Poitier was the first Black actor to win the Academy Award for Best Actor. He was my favorite actor when I was little! My next favorite was Denzel. Anyway, this movie is a mystery drama film about a detective involved in a murder in Mississippi. Quincy Jones did the entire score. Oh my God I just honestly can’t get over Sidney’s acting in this! He is so composed and perfect. I also read that Sidney Poitier refused to film below the Mason-Dixon line due to a scary situation prior to filming, so they filmed in Sparta, Illinois which had the same vibe but less scary. Honestly I would highly recommend watching every single movie that has Sidney as a lead role.

In The Heat Of The Night is on YouTube and Amazon Prime.