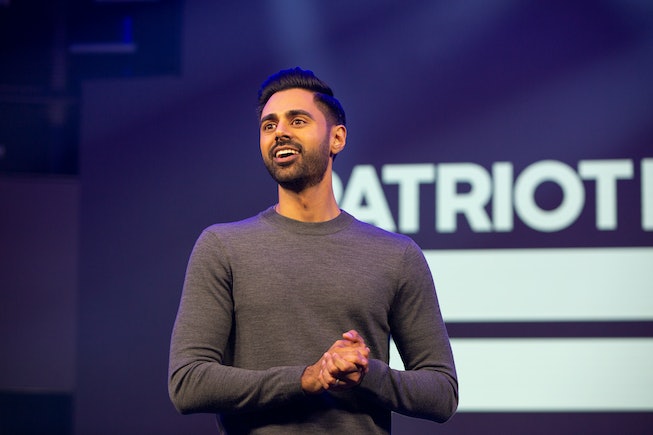 All good things must come to an end, and unfortunately the latest good thing to meet this fate is Netflix's cancelation of comedy-slash-political talk show Patriot Act With Hasan Minhaj. Beside being legitimately funny, Patriot Act dove into subject matter that would rarely get the green light from the typical light-hearted morning or late night circuit; the show spent its six season tenure diving into the student loan industrial complex, the hype phenomenon around Supreme, the scheme of billionaire philanthropy, the opioid crisis, and more.

“What a run,” Minhaj wrote on Twitter. “‘Patriot Act’ has come to an end. I got to work with the best writers, producers, researchers, and animators in the game. My 2 babies were born and grew up with the show. TY to [Netflix] and everyone who watched. Now it’s time to return these screens to Best Buy.”

While we'll miss Minhaj's snark and provocative reporting, we can find solace in the fact that the episodes will remain streaming on Netflix for the foreseeable future. Until then, we here at NYLON combed through Patriot Act's most poignant episodes for your viewing pleasure.

Patriot Act made waves in its inaugural season when it had the guts to be critical about Saudi Arabia, a move that's rarely done publicly in American media. Minhaj dove into the United States' relationship with the Middle Eastern superpower and spoke on the murder of journalist Jamal Khashoggi and its possible link to Saudi crown prince Mohammad bin Salman. Netflix ultimately blocked the episode from streaming in Saudi Arabia, in case you were curious about the effectiveness of its investigative reporting.

"Why the News Industry Is Dying" (Volume 6, Episode 5)

American media is a crumbling, broken empire. This Patriot Act episode doesn't harp on what is or isn't "fake news"; instead it investigates the disappearance of local newspapers due to the shady practices of private equity firms. If there's ever a program that will convince you to get a paid subscription to a local newspaper, this is it.

Truly one of the more heart-breaking Patriot Act episodes, "Fentanyl" explains the devastation of the opioid crisis — and those who have made fortunes off of it — to an excruciating degree. Get ready to have your heart filled with hatred and contempt for the Sackler family.

Taxes are the bane of every American's existence — even the wealthy who routinely evade them. This episode finds Minhaj looking into the "free" services provided by Turbo Tax, and how the company is in cahoots with the IRS to snake away your hard-earned money.

"Why Billionaires Won't Save Us" (Volume 5, Episode 4)

This one goes out to all the billionaire apologists and Elon Musk stans on Twitter! Patriot Act outlines what philanthropy actually means to the one percent. Spoiler alert: It's not as altruistic as you might think. Minhaj sheds light on how philanthropy is in reality a nefarious gateway for the elite to dictate politics and ultimately run the country from the shadows of their multi-million dollar compounds, and it's unfortunately more chilling than you'd ever expect.

NEXT UP
Culture
Netflix Is Seriously Cracking Down On Sharing Passwords
Culture
6 Shows To Binge Once You've Finished 'The White Lotus'
A Night Out
A Night Out With Rachel Bilson
Culture
Phoebe Dynevor Will Not Return for Bridgerton Season 3
Style + Culture, delivered straight to your inbox.