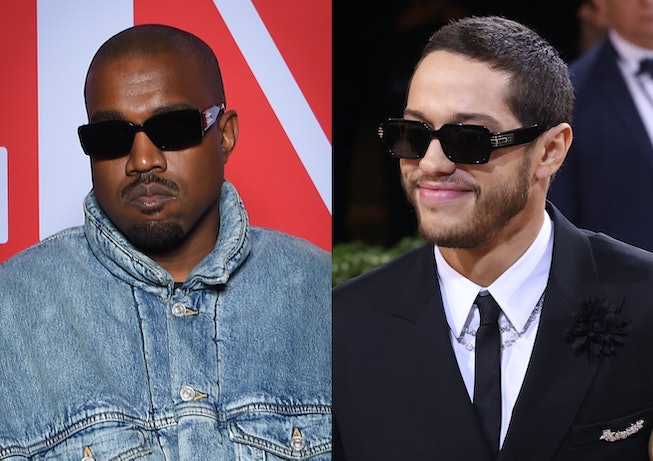 Pete Davidson is reportedly in trauma therapy due to Kanye West’s harassment and bullying.

Following his divorce from Kim Kardashian in March of this year, West has frequently taken to Instagram to ridicule his ex’s new relationship with Davidson. The posts, which have since been deleted, ranged from petty jokes to physical threats — and have pushed Davidson to seek professional help.

An inside source told People that Davidson has been in trauma therapy since April, saying, “The attention and negativity coming from Kanye and his antics is a trigger for Pete.” Most recently, West posted a newspaper-style article with the headline “Skete Davidson dead at age 28,” in reference to Davidson and Kardashian’s recent breakup and using West’s nickname for Davidson.

In the past, West has also posted private text messages between himself and Davidson, along with a slew of insults about the comedian's career and character. At one point, West even released a disturbing music video for his song, “Eazy,” which featured a claymation version of the former SNL Star being kidnapped, burned, and possibly decapitated. Though Davidson chose to combat West's harassment with comedy or silence, it did not stop the 45-year-old rapper from sharing his disdain for the comedian, and his relationship with his ex.

Now that Davidson and Kardashian have called it quits as of last week, it seems Davidson is trying to distance himself from the situation. Reps for the two say they have no bad blood and seem to have split amicably. The inside source told People that Davidson has “no regrets for dating Kim,” despite all the drama, and further claimed that he wants the public to know that she was fully supportive of him throughout their relationship.

Now that their tumultuous romance is over, the source says Davidson “just wants to focus on his career.”