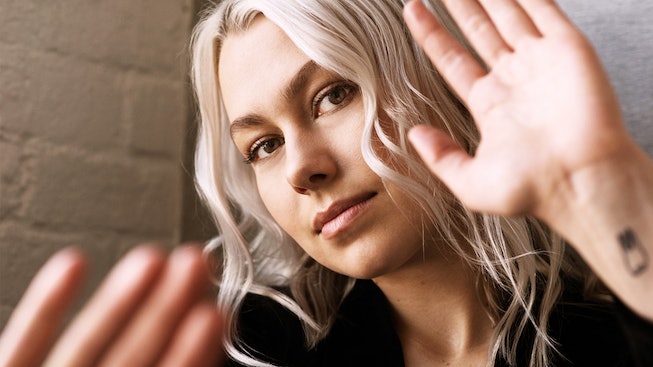 It turns out that a lot of what defines Phoebe Bridgers' music, namely her signature snark paired with staggering and frank storytelling, is partly thanks to some key advice she once received from a former bandmate. In a video with Spotify for their Best Advice series, Bridgers explained that Haley Dahl, whom Bridgers played bass for in their band Sloppy Jane, once told her that "your greatest ideas are your jokes."

"Like the things that you're too embarrassed to genuinely say to a room, you'd be like 'Wouldn't it be stupid if...' and you do the thing? We took that advice pretty seriously in my band boygenius with Lucy Dacus and Julien Baker," Bridgers said in the video.

She gave an example of how Baker putting her foot up on a monitor while shredding during their live shows started off as a joke, but eventually grew into a regular thing during shows. On Bridgers' new album, Punisher, which is out on Friday, the advice may have manifested Bridgers' first ever metal song. As Bridgers explained, she wanted to include screaming on the record — like, "guttural metal screams."

"I actually asked Conor Oberst. I was like 'How do you scream?' And he was like, What are you talking about? You just do it.'," she said. "And I did it and it's on the last song. It's just basically a metal song."

The advice, which Bridgers says basically boils down to the classic "trust your instincts" mantra, has slowly trickled into the other areas of her career, including her social media presence. Though, to be honest, with her Twitter handle being "traitor joe" and her Instagram name as @_fake_nudes_, we already knew that.

Punisher is out June 19th via Dead Oceans. Watch Bridgers' full video below.