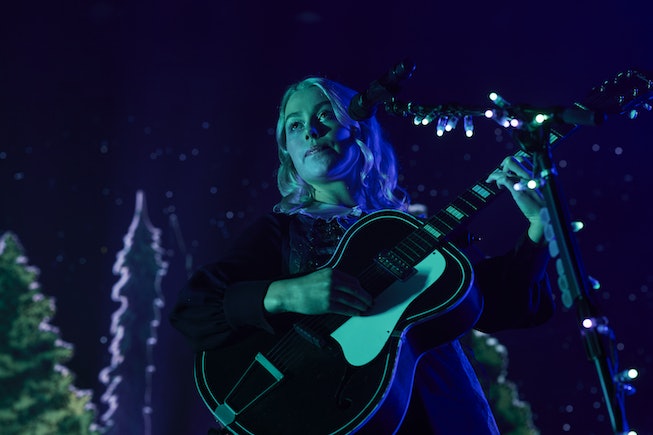 There’s something about a sad Christmas song that can really get you into the holiday spirit. Maybe it’s the freeing release of having to be fake-cheery, or just a natural cycle of growing up, but more and more artists are embracing the bluer shades of the holidays with their wintery releases. The latest to drop one off is none other than Phoebe Bridgers, who pays homage to The Handsome Family’s 2000 track, “So Much Wine,” a Christmas song that’s barely a Christmas song at all — perhaps the best kind.

The singer released her solemn rendition of the track on Thursday, Nov. 17 as her annual Christmas release. The lyrics to the song are certainly on the melancholy side — the song is about the pitfalls of alcoholism during the holidays (we’ve all been there) — but Bridgers’ rendition also emanates real warmth as a chorus made up of her friends and reported fiancé Paul Mescal join in during the hook. Together, as they sing, “Listen to me, butterfly/ There's only so much wine/ That you can drink in one life,” it almost sounds loving.

Produced by Bridgers, alongside longtime collaborators Tony Berg and Ethan Gruska, the song features the dulcet tones of Marchall Vore, Harrison Whitford, Mescal, of course, and violin and whistling by Andrew Bird, with whom Bridgers recently released a duet. The musician released the song on streaming services and Bandcamp, with all proceeds from the track going toward the Los Angeles LGBT Center.

Bridgers has made a tradition of her holiday releases, covering Tom Waits’ “Day After Tomorrow” in 2021, Merle Haggard’s “If We Make It Through December” in 2020, and “7 O’Clock News / Silent Night” in 2019 alongside Fiona Apple and Matt Berninger.

Hear “So Much Wine,” below.