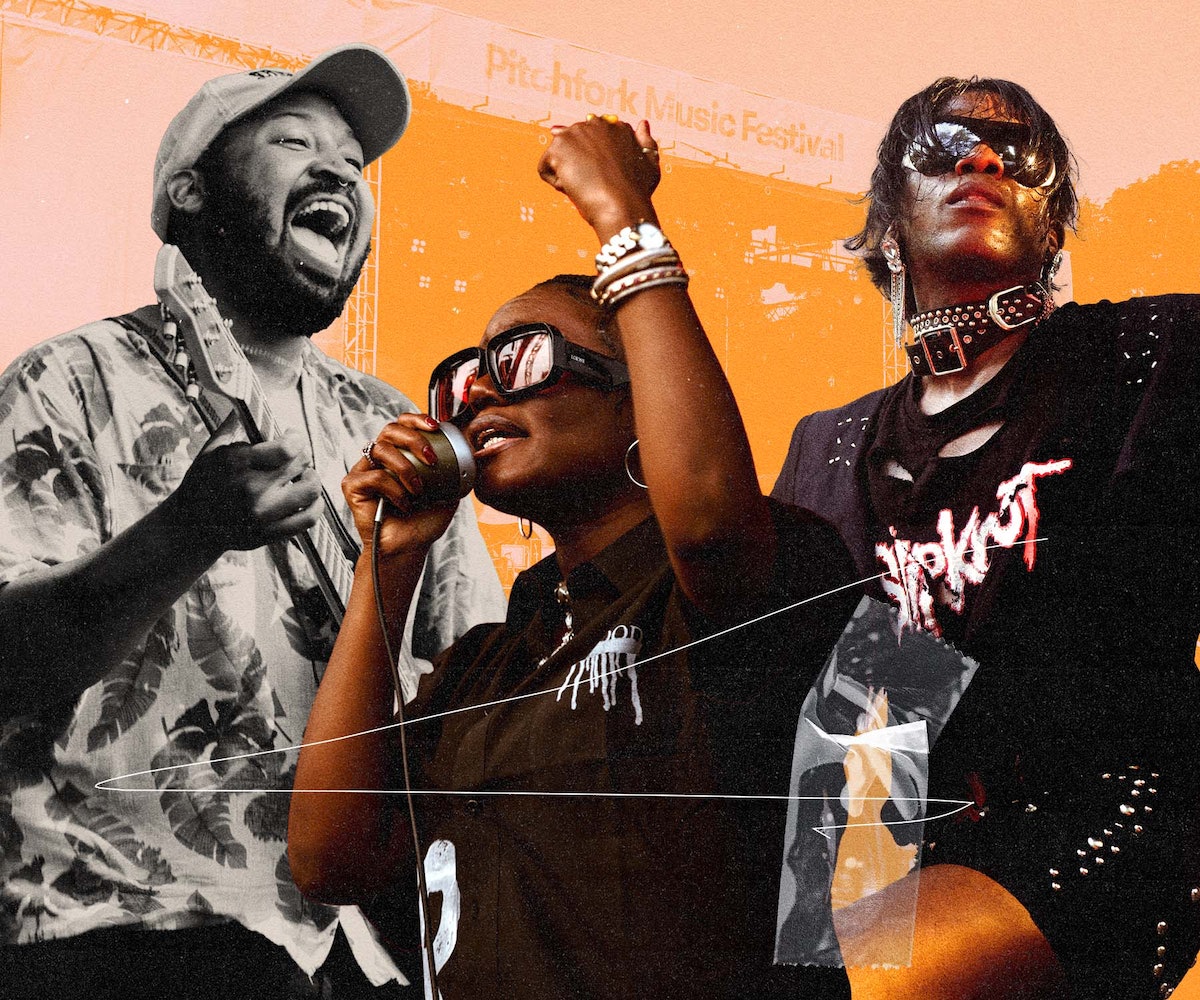 The summer of 2021 didn’t go as most of us hoped. We tried our best to enjoy ourselves, but hurricanes, breakthrough cases, and the cursed phrase, “How was your pandemic?” haunted many of the summer’s festivities.

Pitch: forget it all and party like it’s 2014 in a dusty park in Chicago. Ten thousand or so people attempted to do so this past weekend, September 10-12, at Pitchfork Festival. The festival, curated by the web’s most polarizing music website, has long been known for its line-ups of legends and indie darlings.

Total escapism was elusive. The festival had an overall, relaxed sleepy vibe, as people cautiously dipped their toes back into the experience of going to a music festival for the first time in two years. But aside from the torture of pulling a mask over your sweaty face in 90 degree heat whenever the crowd closed in, wandering from stage to stage with aching feet, envying other people’s outfits, and melting into the crowd felt pleasantly normal and familiar.

Parts of the line-up certainly felt like a return to 2014. Old-school hipsters roamed the park in skinny jeans, eagerly lining up for Animal Collective’s psychedelic Saturday night jam session and instructing younger companions to take note of Kim Gordon’s blistering sound art. Meanwhile, the headliner for Saturday night, St. Vincent, dolled up like a Bond girl in ‘70s, played oldies like “Cheerleader,” and brought the crowd together by making fun of Pitchfork (“Oh, you’d only give this crowd a 6.7?” she jabbed on stage taking a mock phone call). Summer ended when Erykah Badu swept onto the stage on Sunday night, in majestic robes and her signature two-foot-high bowler hat, exuding both glamour and futuristic optimism of an entirely different era.

At other times, it was unmistakably 2021. Both 14-year-olds and a gaggle of gray-haired men dressed up in Phoebe Bridgers skeleton outfits. The diversity of people losing their shit at her headlining Friday night set, where she played hits like “Kyoto” and covered Bo Burnham’s dystopian rhyme “This Funny Feeling,” were reminders of how much the border between mainstream and alternative culture has been broken down. Danny Brown wouldn’t let you forget it was 2021, repeatedly mentioning that he’s 40, owns an air fryer, and sometimes “takes a Tylenol when he gets home, just in case.” Hop Along’s Frances Quinlan, Big Thief’s Adrianne Lenker and teen shoegaze trio Horsegirl were welcome reminders of how rock music is better and more fun than its been in years.

Then, there were a handful of sets surprising, masterful and full-throttle enough to actually make you forget the news, the feeling of the grime under your mask, and the emails waiting for you on Monday. These were the best sets at Pitchfork Music Fest 2021.

Arriving at The Soft Pink Truth’s set, aka experimental electronic musician Drew Daniel who moonlights as a professor of literature, philosophy, and critical theory at Johns Hopkins, one might have been confused as to what they were looking at. Dressed in an oddly preppy salmon pink suit, Daniel was bumping textural electronic music complemented by chirping cicadas, occasional whispering, or whooping into the mic through a kN95.

Then, things took a turn. Stopping halfway through, the artist explained that the blissed out electronica had been the first part of our “lecture.” Trading out his suit, he ducked behind the DJ table to change into a spiked leather vest and other leather daddy gear. He launched into a set of heavy metal and hardcore classics covers, including the Angry Samoans’ “Homo-sexual.” Daniel roared the chorus: “Jesus was a cock-sucking Jew from Galilee.” The act was replete with swaggering crotch grabs and showmanship performed with total seriousness, though he’d interrupt himself with meta statements like, “House music, yeah,” and, “Festival, yeah!” An ironic send-up of the clichés of live performance? Or an earnest, immersive lesson on house and metal? Regardless, Daniel’s was one of the most delightful and surprising acts of the weekend.

Amaarae is one of those artists who can inject their own comfort and confidence directly into the crowd. The Ghanaian-American pop star’s set was a blissed out Afropop-R&B-dancehall party on Saturday afternoon. Her manner was completely casual — she came out dressed in cornrows, leggings, and a T-shirt. But she didn’t need stunts, theatrics, a poker face, or anything but her silken, baby-voiced falsetto to get the crowd moving, frankly, more organically than anyone else all weekend.

Her lush songs — which are all about, in her words, “feeling rich” — were candy, performed with a skillful live band. I pity the self-serious asshole who didn’t join in as she led the crowd in call-and-response lines like, “F*ck outta my way, I’m gonna get paid, just give me my moola-la-la-la,” and the unforgettable, “Trust fund baby with this pussy n***a, you should feel privileged.” Plus, you couldn’t not love her when she cracked up as her grill fell out halfway through a song and covered crowd-pleasers like “Say My Name.”

Bartees Strange’s songs are so fun you barely notice how weird they are until after they’re over. The 32-year-old Washington D.C. musician creates wonky, grooving chimeras of indie rock, rap, punk, emo, and radio R&B. But they’re roller coaster rides without whiplash, just the rush of watching him transform verse to verse. He bounced around in an unbuttoned Hawaiian T-shirt on Saturday afternoon, rapping about his ex while scratching out fat blares of pop-punk guitar, belting the choruses of his sad boy indie rock songs with the panache of a Broadway star.

Unlike other artists who stake their name on “blending genre,” Strange doesn’t sacrifice catchiness for the sake of experimentation. I don’t know whether to chalk the fact that it all works up to his technical skill, his personality the size of Texas or the blunt, funny confessional lyricism that ties his work together. From his attire to his songs, he radiates self-awareness and charisma. “I’ve been waiting to do this my whole life,” he told the crowd. It seems true: a few years ago, Strange might have been slotted as a neo-R&B guy or an “intellectual rapper,” and seen his punk, rock and folk material ignored or dubbed as “confused.” But Saturday’s crowd was with him for every twist and turn.

From the moment Caroline Polachek walked out on Saturday afternoon, grinning in tiny sunglasses and a silk puff-sleeved corset and mini-skirt ensemble that made her look like something between a Black Belt in karate, a renaissance painting, and a pirate, you knew it was on. Her set proved her to be an Ariana Grande-level pop star thespian. The 36-year-old’s expression was deadly serious and her every movement was deliberate and fluid, as she pranced around to the many hits of Pang, her 2019 solo debut album that transformed her from Chairlift frontwoman to the possible weird-pop-girl-mystic successor to Lorde (see: her upcoming tour with Dua Lipa).

Her spell-binding helium and windchimes voice, which often sounds Auto-Tuned even when it’s not, is even more transportive live than it is recorded. But though Polachek’s sound and aesthetic are from another planet, her heartbreak songs are of flesh and blood. “Anyone going through a gnarly break-up right now?” she asked the crowd, before launching into “Ocean of Tears.” She also debuted a new samba-flamenco-style song called “Sunset” that perplexed and delighted the crowd. However, the biggest treat was when she told the story of “Parachute,” a song she wrote about a dream in which she falls out of a plane. Just as she’s accepted her death while hurtling towards the ocean, she explained, she lands miraculously unscathed in a suburban strip mall. “At that moment, all that boring, ordinary-ass shit was so beautiful,” she concluded. Feeling genuinely moved at a music festival is a rare thing. Polachek can apparently do it all.

Yves Tumor was Tina Turner, Mick Jagger, Axl Rose, and Debbie Harry all rolled into one at their Sunday set. At the smaller stage reserved for electronic and folk acts, the dust in the air nearly obscured their goth rock ensemble — leather thigh-highs, sparkly shorts, Slipknot T-shirt, choker and a fur coat — but ultimately it added to the mystique of their feral rock set.

They stomped around, sneering, smirking, swinging the microphone, oozing sex and howling their majestic art-glam-grunge rock songs, mostly off of 2020’s Heaven to a Tortured Mind. “Noid,” however, Tumor’s churning banger off 2018’s Safe in the Hands of Love, caused the crowd to become nearly apoplectic. I was transported to CBGB in 1976 as I watched a dude in a cowboy hat and a cheetah-print top pass around poppers to his friends. But with Yves Tumor playing shows in 2021, I suppose we don’t have to look to the past for that kind of show anymore.