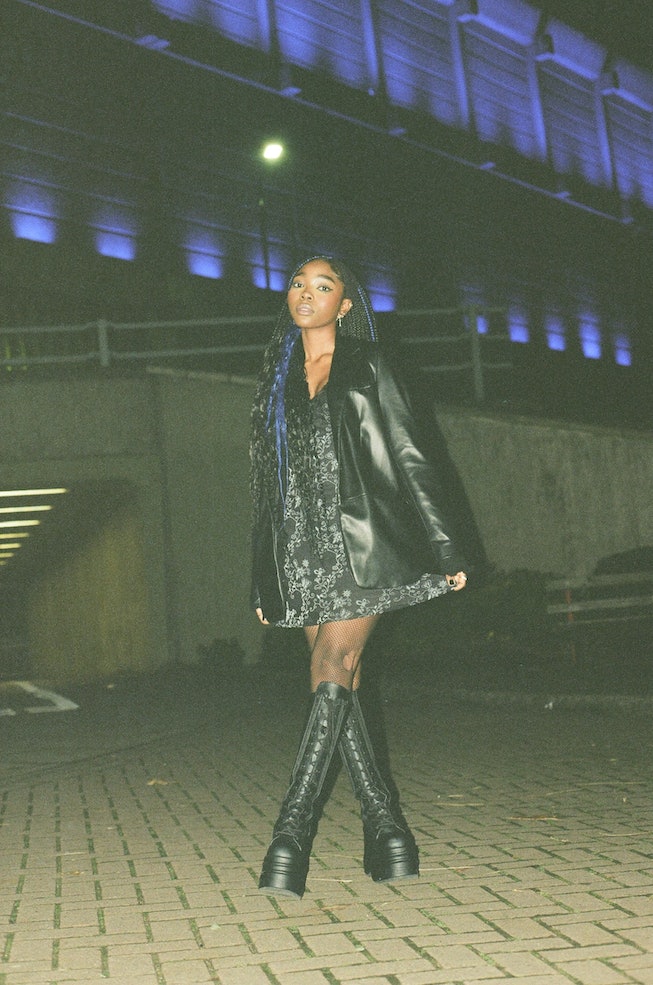 Precious Pepala has a voice that’ll stop you in your tracks — at least, that’s what it did to the over 2.3 million people who watched her belt out Alec Benjamin’s “Water Fountain” in a 2021 cover that went viral on TikTok. The 17-year-old U.K.-based musician has since shown her vocal talents extend to her own original music, too. This year, she’s released a string of stunning original releases, “My Eyes Only,” and “Looking For Trouble” — songs that waver and gleam in the warmth of her voice even as her songwriting breaches thorny topics like protecting her own heart and the fears women face while walking home in the dark.

On Friday, Dec. 2, Pepala shares her latest single “Voices,” another arresting track that sheds light on a subject many would prefer to keep private: the voices in our heads we keep at bay through distractions. While she might’ve come up singing other people’s songs, it’s clear Pepala is at her best singing (and writing) her own — if only to forge a connection with one other person. “It's very important to me that the music resonates with people,” she tells NYLON.

Below, we caught up with the rising songwriter over a recent Zoom to learn more about “Voices,” her musical roots, and why she hopes one day to share a stage with Harry Styles.

Tell me about “Voices.” What sparked you to write it?

“Voices” is a song that surprisingly, when it was written, I was in a really good place. It contrasted with the dark nature of the lyrics. I think it's more about not wanting to be left alone with your own thoughts and not being in the best headspace and knowing how your brain can sometimes negatively impact your mood — even more so than when you are in a bad place already. Constantly wanting to be distracted, being around other people and different sources of media, things like that. I think a lot of people, unfortunately, have related to that at some point in time, especially after the pandemic and recent years and everyone's life being flipped upside down. I think people will feel comforted in knowing other people feel this way as well.

The songs you've already released, “My Eyes Only” and “Looking For Trouble,” breach darker topics. Is resonating with people, or having your songs be a source of comfort, something that is important to you when writing music?

Definitely. When I first started writing music with Jordan, who's my kind of co-writer, producer, and all that stuff, we went into it with the intention of wanting the music to be universally relatable. Even if it's about something that I've personally experienced, we always try to make the lyrics either specific enough where someone will be able to see me in that scenario, someone else in that scenario, or be able to just relate to it from personal experience. I think it's very important that the music resonates with people and helps them to navigate how they may be feeling at a certain moment in time.

How did you begin writing music and getting interested in making your own songs?

Well, if I go all the way back, I've always loved singing. Even now it's my favorite thing to do. I never really was interested in songwriting when I was younger, but then as I became a teenager, I would work on music at school and that's where I started doing very mediocre, childish songwriting. I started going to sixth form and leaving secondary school, I was like, “Wow, I kind of want to do this for real and take it seriously,” which was only a year ago. So it's quite new to me and I'm still very much learning and trying to get better.

Did you grow up very musical?

Honestly, no. No one in my family really is [really] musical. I think maybe just me and my younger brother. But my dad is a pastor, so I grew up in the church. I was always surrounded by that side of music and gospel music. [At] seven or eight, I decided to go out and listen to different things myself. And I'd always watch MTV and wait every Friday for the new songs to drop. Whenever the new songs would drop, I'd be sat by my TV for hours listening to the Top 50 or whatever it was. That kind of started my love for music outside of gospel and what I heard in church.

Who were some artists that you really liked?

Honestly, I was a really big pop girl, so I was a fan girl as well. I was very into Justin Bieber, One Direction. I loved Beyoncé, and when I got a bit older, I started listening to a lot of ‘90s R&B. I loved TLC, Aaliyah, Destiny's Child. It definitely changed as I slowly grew up, and I'm saying grew up as if I'm old now. When I was slightly younger.

For a while, you were posting covers on TikTok. Is that how you began sharing music online?

I decided to start a TikTok account last January when we were still in lockdown in the U.K. It was generally just because I didn't have anything else to do, so I was like, I might as well do this. And then slowly my account grew and I started writing music. I [thought] I should probably start posting my own stuff, and it progressed from there. But initially it was just me being in lockdown and wanting to have a way to interact with other people, even if it wasn't in person. Also, just because I enjoyed doing music in any form.

You’ve had a few covers go viral. How has it been to develop a community of listeners on the app?

Do you have a dream artist that you want to work with or collaborate with?

I would honestly one day want to sing with Harry Styles. He's like [my] childhood idol from the One Direction days. Even if it's not an actual project, to be able to sing a song with him would be really cool. But also intimidating. It would definitely be fun, I think.

Did you see his recent tour?

Yeah, he was actually my first-ever concert — I'd never been to a concert until this year. And he played Manchester, which is an hour and a bit, two hours away. It was so weird seeing someone that you grew up seeing on a TV screen or a phone screen, in person. I still come back and watch the videos and I don't feel like I was there. It's so surreal. I don't think he brings fans on stage, but if he ever did, I'd love for one of those fans to be me.