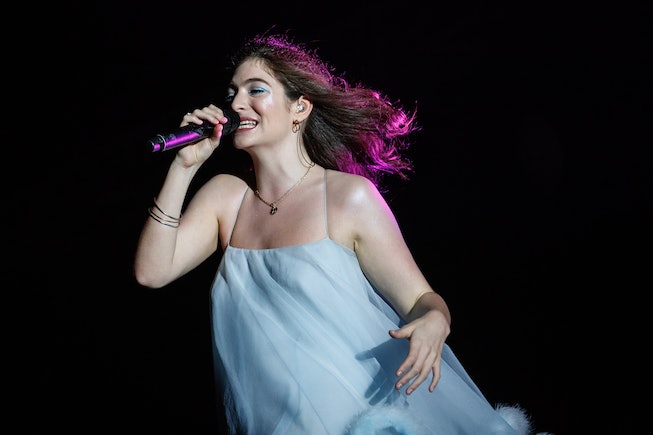 After two years of cancelled shows, Barcelona’s gargantuan international music festival Primavera Sound will officially return in 2022 for its most massive edition yet.

Festival organizers formally announced the event on Tuesday, also unveiling its most massive — and exciting — lineup to date, with over 400 artists expected to take over its stages in celebration of its 20th anniversary. And its headlining acts are just as special: Jorja Smith, Megan Thee Stallion, Dua Lipa, Tyler, The Creator, Beck, Pavement, Tame Impala, The National, The Strokes, Nick Cave and the Bad Seeds, Gorillaz, Interpol, Yeah Yeah Yeahs, and most notably, Lorde.

This is major news for fans of any of the named artists above, but especially Lorde fans, who have been waiting for what feels like decades for a sign, any sign, of her next studio album; thankfully, her Primavera Sound placement suggests that a new Lorde album is definitively on the way, and may arrive sooner than we expect. Primavera Sound itself seemed to confirm so in a press release, teasing Lorde’s set by writing, “Lorde, who will emerge from her retirement with her third album after her unforgettable visit in 2018.” However, the text has since been changed to remove mention of her third album, according to screenshots on Twitter and their website at press time.

Below, everything you need to know about attending Primavera Sound 2022.

As mentioned above, Primavera Sound 2022 will not only be making its return after two years of cancelled events but it will also be celebrating its 20th anniversary, which festival organizers say will bring about the “largest edition of Primavera Sound ever seen.” Over 400 artists will perform in a two week lineup, with each weekend lineup being completely different from the other, save for a few select artists who will appear both weekends.

Jorja Smith, Tyler, The Creator, Gorillaz, Pavement, The National, Tame Impala, Massive Attack, Beck, The Strokes, and Nick Cave and the Bad Seeds will be headlining weekend one.

Dua Lipa, Megan Thee Stallion, Yeah Yeah Yeahs, Interpol, and notably, Lorde (whom the festival teases will have released her third album by then) will headline weekend two; they’ll be joining Tyler, the Creator, Gorillaz, Massive Attack, The Strokes, Jorja Smith and Tame Impala, who will all retake its stages again for a second weekend.

In between the main festival days there will be an additional slate of programming called Primavera A La Ciutat, which encompasses 150 different concerts spread out across different locations in Barcelona. Beck, Jorja Smith, Jamie XX, Disclosure, and Megan Thee Stallion have been confirmed as the biggest acts participating.

And if all that wasn’t enough, Primavera Sound will also close its 2022 edition on June 12 with Brunch on the Beach, a final slate of performances with DJ sets by Amelie Lens, Peggy Gou, Nina Kravitz, and more.

See the full jam-packed lineup for Primavera Sound 2022 on its website.

Primavera Sound 2022 is taking place over two weekends in June 2022: 2-4 and 9-11. The festival will be held at the public park Parc Del Fòrum in Barcelona in the city’s Sant Adrià district.

How To Buy Primavera Sound 2022 Tickets

One-day tickets and dual weekend passes start at 110 euros and are available to purchase on the festival’s website now.