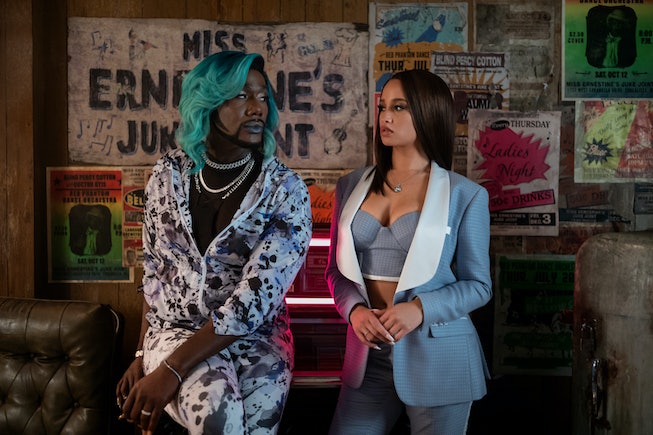 During the summer of 2020, one show debuted and immediately changed the visual language for what a modern prestige drama could look like. Created by Pulitzer Prize winner Katori Hall, the STARZ drama P-Valley felt exciting and new amidst a television landscape that seemed to prize stories about difficult white men. P-Valley, on the other hand, wore its Black, working-class, and defiantly queer heart on its sleeves. Based on Hall’s play Pussy Valley about a popular Mississippi Delta strip club, its employees, and its frequent patrons, the drama was an immersive look at a part of society we don’t typically see highlighted on premium cable. Expectedly, by the time it concluded its eight-episode inaugural run, fans were thirsty for more.

It’s been two years since then, and now, STARZ is finally delivering on its promise for a second season. After teasing us with (an admittedly eye-opening) set tour and with what ended up being half a release date announcement, the cable channel has finally filled in the blanks to give us all the details we’ve been so anxiously awaiting — and have given us our first teaser, to boot.

Below, find everything we know about the upcoming sophomore season of P-Valley.

After two years off the air, P-Valley will finally return for its long-awaited second season on Friday, June 3 at midnight on the STARZ app, STARZ streaming, and on-demand platforms.

The New Episodes Will Be Just As Dramatic

Season one of P-Valley capitalized on its eerily sexy Southern gothic aesthetic to tell a story that was undeniably entertaining but often quite dark, and judging from a recent plot synopsis, season two is all set to follow in those footsteps. “When darkness descends upon Chucalissa, errybody and they mama must fight tooth and talon to survive. While some take flight to perilous new heights, others dig in their stilettos and stand their ground no matter the cost,” STARZ teases.

“Back at The Pynk, Autumn and Uncle Clifford grapple for the throne as new blood shakes up the locker room. Meanwhile, with the casino’s fate hanging in the balance, the local political machine kicks into overdrive. In these unprecedented times, death and danger lurk around every corner.”

…and, yes, they will touch upon the pandemic

According to STARZ, season two of P-Valley, which was filmed during the COVID-19 pandemic, will touch upon the harrowing virus in its episodes. “The upcoming sophomore season reveals a whole new Pynk as it struggles to remain open during a pandemic,” reads an additional synopsis.

Katori Hall also touched upon this in the season two set tour. “[Season two] occurs five months after Autumn Night saves The Pynk,” the showrunner said, referring to the riveting events of the season one finale. “Unfortunately, the pandemic has really came and turned everything topsy-turvy, just because it is a business based on gathering. It is a business based on intimacy. And the writers were very inspired by the fact that there were some very inherent struggles in that.”

All of Our Favorites Are Returning, Plus a Few New Faces

P-Valley would be nothing without its eclectic cast of complex characters, and lucky for us, season two will see the return of everyone we’ve grown to love so far — including Nicco Annan as Uncle Clifford, Brandee Evans as Mercedes, Elarica Johnson as Autumn Night, Shannon Thornton as Miss Mississippi, J. Alphonse Nicholson as Lil’ Murda, Parker Sawyers as Andre, Harriett D. Foy as Pastor Woodbine, Dan J. Johnson as Corbin, Morocco Omari as Big L, Dominic DeVore as Duffy, Tyler Lepley as Diamond, Jordan M. Cox as Derrick, and Skyler Joy as Gidget.

New Original Music Is On Its Way

According to the set tour, music will continue to play a huge role in season two of P-Valley. In addition to another rollicking soundtrack of familiar Down-South anthems, the drama’s sophomore run will feature four new songs from central rapper Lil’ Murda. “You know the P-Valley sound is all about the Dirty South,” Hall teases. “[Lil Murda] spreads his wings connecting with bigger artists, and also becoming more innovative in terms of his sound and beginning to experiment. You’re going to see a new kind of sound emerge from Lil Murda.”

We’ll Be Getting Plenty More Dancing

Check out the full teaser below.

Season two of P-Valley premieres on STARZ on June 3. Catch up with season one now.

NEXT UP
Culture
Phoebe Dynevor Will Not Return for Bridgerton Season 3
Culture
Succession Season 4 Trailer Explodes With Family Drama
Culture
Netflix Is Seriously Cracking Down On Sharing Passwords
It Girl
Madison Bailey Is Embracing The "Elegance" of Being in Her Mid-20s
Style + Culture, delivered straight to your inbox.