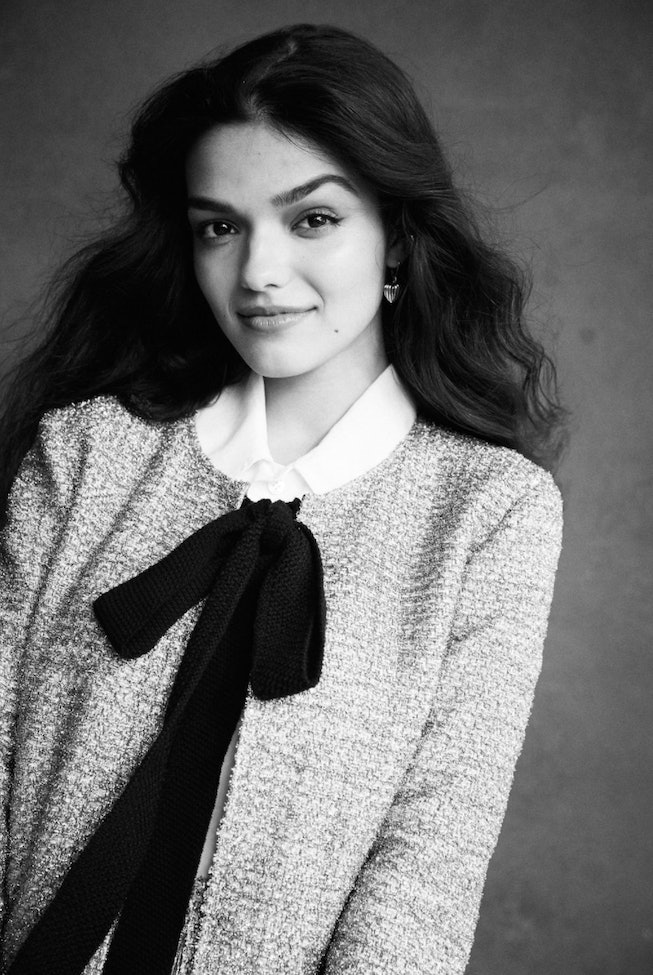 Rachel Zegler is on the precipice of something big. The actress only just graduated from her all-girls New Jersey high school in 2019, where she was a musical theater star, and now she’s starring in Steven Spielberg’s highly-anticipated remake of the classic Broadway musical film West Side Story (in theaters Dec. 10.)

She also landed the role as Snow White in Disney’s upcoming live-action adaptation, written by Greta Gerwig and starring Gal Gadot as the Evil Queen. And she’s even got a superhero movie under her belt, in the upcoming Shazam! Fury of the Gods sequel with Helen Mirren and Lucy Liu as her co-stars. All this, before Zegler’s 21st birthday.

But first, there’s Princess Of South Beach — a 36-part bilingual, audio telenovela podcast starring Zegler as twin sisters María del Carmen and Gloria Calderón, who are separated at birth. Where María was raised as an orphan in a convent, Gloria is a privileged socialite living in the lap of luxury in Miami Beach, and Zegler voices them both as they undergo over-the-top situations we’ve come to associate with the telenovela style.

NYLON caught up with Zegler ahead of West Side Story’s premiere to talk about the podcast, meeting Brandy, and the best piece of advice Steven Spielberg gave her, ahead.

What drew you to being part of a narrative podcast like Princess of South Beach?

As someone who grew up with the ridiculousness of telenovelas, I was interested in something very self-aware. Obviously, narrative podcasts are very popular nowadays, and it was really cool to venture into that side of entertainment, and also we were in the middle of a pandemic. So quite literally this closet behind me, was my studio. It was a safe way to do what I love and tell stories and entertain, while also being able to represent for my people and my culture in a funny, self-aware way, because I think a lot of us can agree that many telenovelas are so ridiculous and have so many tropes that are so easy to make fun of.

Were telenovelas a big part of your life growing up?

It was when I was very young, so I don’t know the names of them. The intros to them were just so scorched into my brain, where like people were walking on the top of a waterfall with horses. And I remember that so vividly, but it was really when I was just like, with my abuelita. When my mom would leave my sister and I with my abuelita for the day, we’d just be spending time with her and she’d have it on the background. And I just remember being so confused by it. As I got older, I wasn’t watching telenovelas anymore, because I wasn’t being babysat by my abuelita anymore. And then I watched a lot of American soap operas with my mom, which are still equally as ridiculous. I think it’s just, we have a flare for the dramatic as Latinas.

What was it like to voice two characters, who are sisters at that?

It was really interesting the first day of recording, because we were trying to find the voice of Gloria Calderon, which was a lot more valley girl, deeper in my register. And then the voice of María del Carmen, who’s this orphan who grew up in a convent, and up until her teenage years, really thought that she was just going to go and be a nun. So it was also trying to find her voice, which is a lot lighter and a lot higher pitched and breathier — it was very, very interesting.

And it was really fun to bounce around when we were doing ADR, because I initially recorded all of Gloria’s lines first and then we moved on to María del Carmen because María del Carmen has a lot more were to do, but Gloria is the narrator of the whole story because she’s kind of first-person omniscient, and so she’s watching the whole thing happen while also offering her own sassy insight.

What has it been like to see the response to something that you recorded during the pandemic that people are now finally getting into?

It’s super fun. Personally, I’m an avid listener of it, because I recorded only my parts, and it’s not like the movie where you get to sit there and read the script and have a read-through with everybody. I think there’s 36 episodes and episode 21, I think, just came out. Listening to it has been so fun for me, because I didn’t get to hear what Gina got to do, or Ivonne or Raul or Danny. I haven’t been able to hear what their characters go through and their side plots and everything that’s going on with them. So it’s quite an entertaining podcast. I know I’m very biased because it’s mine, but it's been really fun to listen to the response, people being just enthralled by the drama and also just the humor. It is very, very funny.

As an actor, you have some huge films coming out, including West Side Story and Snow White. How are you feeling, and do you feel ready for what’s to come?

Not at all [laughs]. I don’t know who would, honestly. I mean, it’s such a blessing. It comes with a lot of different changes and a lot of new things, and I get the awesome opportunities to get to sit here and talk to you today, that’s so cool. And we’re very excited. West Side Story comes out in two weeks, basically, which is just wild to me. We’ve been sitting on this project for so long now, and I’m so excited to share it with the world. And then obviously I worked on Shazam! and we’re working on Snow White right now. So it’s such an incredible trajectory that I’ve been able to have, and it comes with a lot of different transitions, and realizing just how many people are paying attention to what you’re doing and paying attention to your career. Which can have its good moments and can have it’s not-so-good moments, where you feel like everybody’s staring at you, but all in all, a very positive experience and I’m very, very excited for what’s to come.

I saw you met Brandy recently, which is amazing.

I did. It was so cool. I spotted her in the green room at the AMAs, and I guess she was going up to present and I had lost my team. I got off stage and my team ended up in the middle of the BTS performance, and they were obviously very enthralled by BTS. And I was back in my green room and Brandy Norwood was just sitting there and I had to go up to her and talk to her. I grew up on her [and] Whitney Houston [on] Cinderella, which was so amazing. And I got to talk to her about that and also talk to her about Snow White a little bit, and it was just a cool moment. She is a goddess.

What a fun connection to that really iconic movie we grew up with. In terms of what you’ve said about feeling like more eyes are on you than ever, how do you feel about some of the conversations around West Side Story? Do you follow Twitter criticism, for lack of a better word?

I am someone who tries not to read any of that. Very sage advice I received from Steven Spielberg himself is, just don’t read it, don’t entertain it. Because at the end of the day, it’s a movie no one has seen yet. So if people want to go out there, they want to criticize something they haven’t seen, then I guess they don't have much more to do with their day and that’s okay. I’m personally very excited. I’m personally very proud of the work that was done. I got to witness firsthand the extensive research that went into the film that we were able to make. And I have been able to also see the finished product, four times now. And I’ve liked it more every single time, which is not common for people watching their own work.

And I have to say to those people, please give us a shot, please go to your theater December 10th and see it. And then you can have as much criticism as you’d like, you are entitled to your opinion. You’re allowed to say what you think, what you believe. Make sure you hold space for the fact that it’s not out yet and you haven’t seen it. I personally won’t be reading any reviews or anything like that. Especially reviews that came out from people who haven’t even seen the film. It seems a little counteractive, counterintuitive on my part. But no, I try not to entertain the conversation that doesn’t involve the work that’s actually been done, and from people who aren’t aware of the work that’s been done or the work that has been made.

You can listen to Princess of South Beach on iHeartRadio, Apple Podcasts and everywhere podcasts are heard.