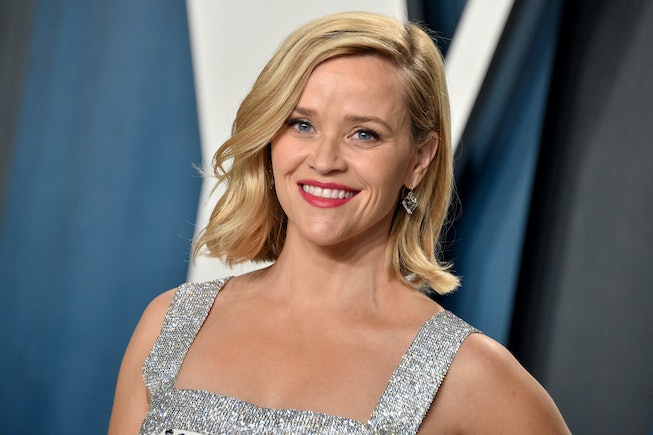 Between HBO's Big Little Lies, Apple TV+'s The Morning Show, and, most recently, Hulu's Little Fires Everywhere, you'd be forgiven for thinking that Reese Witherspoon only knew how to play entitled yet complicated white women on prestige TV dramas. But you'd also be remiss to forget about her past career as a romcom star who brought her twee sensibility to beloved classics like Sweet Home Alabama, Four Christmases, Home Again, and Just Like Heaven. If you've been missing this other version of Witherspoon, you're in luck because the Oscar-winning actress has just signed on to star in two new romcoms for Netflix, both of which will be produced by her Hello Sunshine production company.

Your Place or Mine, the first of these two projects, will "focus on two long-distance best friends who change each other’s lives when one decides to pursue a lifelong dream and the other volunteers to keep an eye on her teenage son," according to Deadline. Hello Sunshine (along with Jason Bateman's Aggregate Films) have already tapped the film's writer Aline Brosh McKenna — best known for writing hits like The Devil Wears Prada, 27 Dresses, and We Bought a Zoo, as well as for creating the criminally underrated Crazy Ex-Girlfriend alongside Rachel Bloom — to direct. Speaking on her involvement, the BAFTA-nominated McKenna said, “I’m the hugest Reese Witherspoon fan on earth, not just of her immense talents as an actor but also her producing skills. I couldn’t be more excited to direct this movie for Netflix, working alongside Aggregate and Hello Sunshine.”

The Cactus, on the other hand, will be based on the New York Times bestselling novel of the same name (itself a Reese Witherspoon x Hello Sunshine Book Club pick), which follows 45-year-old Susan Green as her life is turned upside down following the loss of her mother and an unplanned positive pregnancy test. The logline for the film reads: "An unexpected pregnancy at 45 causes a reserved woman to rethink the structured life she has created for herself and leads her on an unconventional journey toward love, family and learning to embrace the unexpected." As of now, no director has been attached.

After previously collaborating with HBO, Hulu, Apple TV+, and even Quibi, these two projects will mark Witherspoon's first for Netflix — something the super-producer seems very excited about. “We have been looking for the right feature opportunities to collaborate with Ted Sarandos, Scott Stuber and the entire team at Netflix for a while and we couldn’t be more excited to be working with them on these two romantic comedies,” she said in a press release. “Both Sarah Haywood’s and Aline Brosh McKenna’s stories blend everything we love about traditional RomComs with strong, smart, and determined female leads."

Now, excuse me while I watch Sweet Home Alabama on a loop.