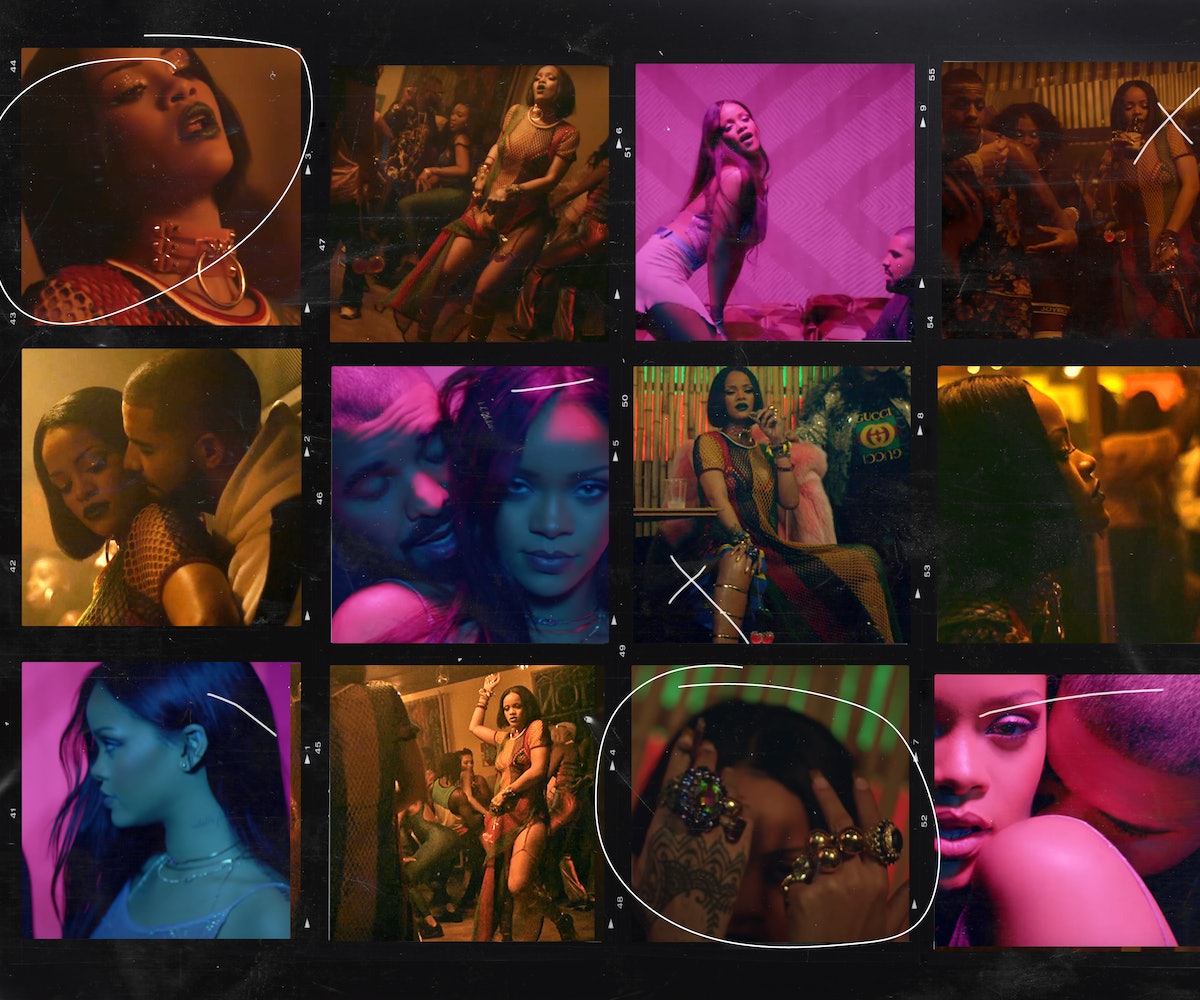 In our collective nostalgic memories of summer 2016, there is one record that scored wining waistlines, heavy bubbling, and a recall of riddims from the past: Rihanna’s “Work” featuring Drake. The lead single off her long-awaited eighth studio album, Anti, is one of many records throughout the now-storied pop star’s career that nods to her Caribbean heritage, inspired by and sampling Jamaican musician Richie Stephen’s 1998 Sail Away riddim. Written with some of Toronto’s biggest talents — PartyNextDoor, Sevn Thomas, and producer Boi-1da, who are all of Caribbean heritage, alongside Noah "40" Shebib — the song’s now infamous punchy build-up and patois-laden lyrics were a striking departure from the maximalist pop sound that saturated her previous album, 2012’s Unapologetic.

But the proof is in the pudding (and souse): Four weeks after its release, it hit No. 1 on the Billboard Hot 100, where it reigned for nine consecutive weeks, and “Work” has since gone platinum multiple times over in several countries. Five years on, the song is also a potent example of Rihanna’s legacy as an innovator, an artist who’s always creatively broken the rules and is now among one of the biggest trendsetters of our time.

Upon its release, “Work” was met with comments steeped in racism and xenophobia. From music critics to fans, many were embarrassingly unaware of the languages, dialects, and creoles that exist in the Caribbean region. Her invocation of patois was called “gibberish”; she was confusingly dubbed a “post-verbal pop star,” among a host of other needless commentary. But her patois was a lyrical risk that the Bajan artist was willing to take and no stranger to. The very first words she uttered on her debut single, “Pon de Replay,” were: “Come, Mr. DJ, song pon de replay,” and she would later go on to include patois and Caribbean parlance into singles like “Man Down” and “Rude Boy.” “Work” functioned as a pivotal return to her regional heritage sensibilities through language.

But what made the song particularly standout was the way it invoked the jams and bashment parties of every Caribbean youth’s past. You know, the furnace-banging, wall-to-wall, packed in an unfinished basement with sweat dripping down your face kind of party? Shot in The Real Jerk restaurant, located just east of Toronto’s downtown core, the equally energetic music video for the song was just that, viscerally tapping into the director’s and Rihanna’s own Caribbean heritage and the well-known Caribbean community that exists in the city. Opting for two minimalistic sets, Director X stripped the visual to its bare minimum in an effort to use dance as intimacy and community building. Much like what goes down at dancehall street parties, the dancers and dance groups in the first half of the video are seen sporting the latest synchronized moves, tic tocs, and wines. Rihanna dances and wines on Drake, and in the video’s second half, a warm purple, magenta hue colors the two.

In all its intentional and nuanced simplicity, the music video for “Work” was a homecoming embodied.

Unlike her other music videos, “Work” demanded a visual that departed from her more pop-leaning records. A return to her roots, it was a reminder of who she was and the culture that informed and continues to inform her. In all its intentional and nuanced simplicity, the music video for “Work” was a homecoming embodied.

Even in selecting the fashion for “Work,” her nods to particular moments in dancehall style iconography stand out. Draped in a Rasta-colored netted dress (part of an exclusive, special-edition runway piece from Tommy Hilfiger's Spring 2016 collection), as well as bold statement rings, strappy gold, leg-wrapping sandals, and a sharp, blunt bob, Rihanna channeled the dancehall attire of the '90s. Dancehall queens often use their dance and outfits as an extension of their sexual prowess, agency, and expression. Rihanna, who has always maintained open spirited and pleasure-first politics in her music, fully embodies her beliefs through her styling choices in “Work.” (A subtler nod is her BDSM-inspired choker, a revisit to her provocative “S&M” single from 2010 in all its devilishly rebellious and kink-driven glory.)

Her efforts even bled into its live performances. At the 2016 VMAs, Rihanna took the organized chaos of Caribbean fetes and placed it on the world stage. The live interpolation of “Work” during her performance honed in on the communal element of Caribbean parties where everyone gets to shine inna di videolight. In the same way a deejay mutes a song at everyone’s favorite part to allow partygoers to bellow out the lyrics, Rihanna graciously steps aside to let the crowd of dancers around her put in their own work in front of the camera. On that humid, airhorn-filled stage brimmed with dancing bodies, Rihanna’s community-centered attitude showcased and honored dancehall culture in a way that felt authentic.

If “Work” shows us anything, it’s Rihanna’s commitment to carving her place as an artist willing to break the rules. Boldly going against what’s expected to enhance her artistry, she has shown time and time again that some risks are worth taking. The self-proclaimed bad gal has always been at the helm of propelling performance, fashion, culture and music. Her work, work, work, work, work, work has not gone unnoticed.