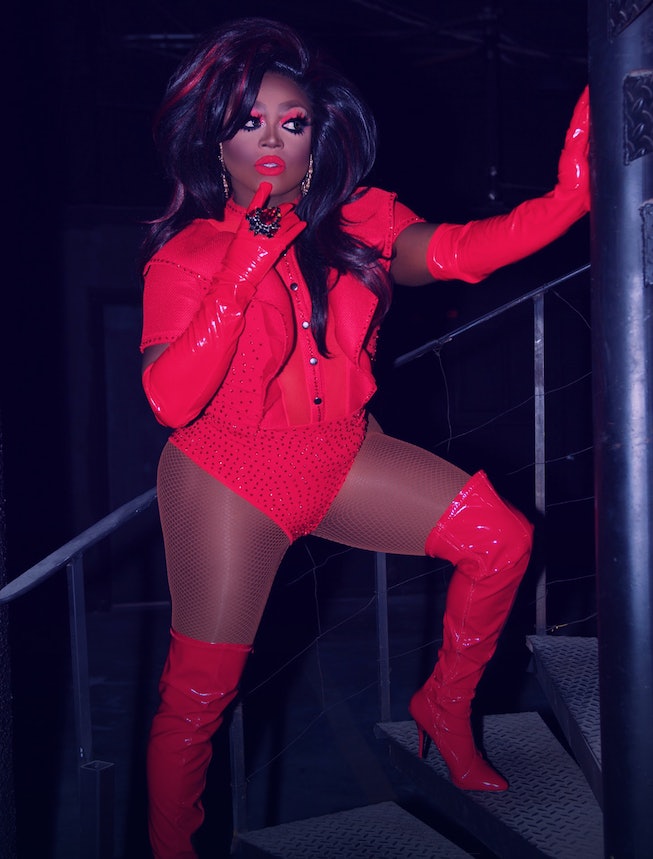 Every week, NYLON writer Michael Cuby will conduct an exit interview with the queen eliminated from RuPaul's Drag Race All Stars Season 5. This week, Mayhem Miller was asked to sashay away.

In Los Angeles, where she has been working for the better part of the last two decades, Mayhem Miller is known as a legend — the life of the party, as she would say. It’s for this reason that so many were shocked that it took her until season 10 to finally get cast on RuPaul’s Drag Race, despite the fact that she had been auditioning every year since season 2. Nevertheless, the queen arrived in full-force, getting off to a terrific start when she took home the win for her first very first maxi challenge after crafting a Margiela-inspired outfit made of black rubber gloves that left the judges gagging. It may have taken her forever to get to Drag Race, but now that she was there, she was ready to fight — or so it seemed, until she was eliminated four episodes later.

Unfortunately, the queen didn’t fare as well during her stint on All Stars. In a complete 180-degree turn, Mayhem actually placed in the bottom during her first challenge thanks to her unsuccessful attempt to turn a popular meme into a full-blown variety show performance. She did a little better in the following weeks, even placing in the top during the “Get a Room!” challenge. But when it came time for her to participate in an improv challenge — the same skill that sent her home in season 10 — Mayhem once again failed to impress, landing her in the bottom next to her scene partner India Ferrah. And while, in theory, Mayhem’s track record would have made her a surefire candidate to stay over India (who was in the bottom for the third week in a row), her own acquiescence to going home caused the other queens to give up on her too. When challenge winner Miz Cracker tied with lip-sync assassin Morgan McMichaels in the Lip-Sync for Your Legacy, both lipsticks were revealed to have Mayhem’s name on them.

Ahead of last week’s episode, NYLON hopped on the phone with Mayhem Miller to talk about why she didn’t fight harder to stay, the real reason she voted to send home Shea Couleé last week (and why she still is rooting for the Chicago queen to win the entire competition), how her nightly hosting duties should have helped her in improv challenges, and why she felt All Stars was the right time to open up about her substance abuse problems and her time spent in jail.

What do you think went wrong with this challenge?

Umm, I felt that me and my scene partner did an amazing job and I was very secure in what we delivered. But you know, I just felt like, hey, if it’s our time, it’s our time, and I was willing to be okay with that.

You went home during an improv challenge in season 10. Were you nervous about doing another one?

No, I wasn’t. I was actually excited because it was kind of another Rudemption moment to challenge myself. I do improv all the time. I’m a comedian, I’m a host. I host many things throughout Southern California on a nightly basis, and one of the things you have to do is think on your toes because you’re interacting with the crowd and the audience. That’s what a good host does — they have to improv, think on their feet. I’ve done that for the 19 years of me doing drag. So I was very excited to do it and show the world what I’m capable of.

You said you were shocked that you were in the bottom and actually thought you’d be in the top. Did you think you had a chance of winning this challenge?

Ummm. Based on what I saw of everyone else’s performances, I thought everyone did a great job. I wouldn’t have picked [myself as] a dead winner, but I definitely thought it was very close with everyone, so it was going to be a difficult decision.

When it came time for you to fight to stay, you seemed very determined to not throw your teammate India Ferrah under the bus. But as it turned out, India was doing the opposite — telling everyone that you didn’t pull your own weight and, ultimately, that you dragged the whole performance down. How did it feel to see her not extending the same courtesy to you?

My thing is that, if you are a scene partner, you have to be supportive no matter what because what you give is what you give. I’m not into throwing anyone under the bus, especially for a good collaborative effort. So all I can do is what I could do, and represent myself and what I believe and stand in to the best of my ability. I was going to champion her because I thought she did a great job and I thought I did as well, so I just waited to see how the cards were going to fall.

This was India’s third time in the bottom. Given how much better your track record has been, were you surprised that your fellow contestants chose for you to go home over her?

If you go on track record, yes, I probably should have continued in the competition. I would agree to that.

Speaking of track records, last episode, you voted to send home Shea Couleé. During a confessional, you mentioned that you were under the impression that people were going to use this opportunity to get rid of a frontrunner like Shea. Were you surprised that you were left as one of only two people to try to send her home?

My reasoning for my selection of the lipstick was exactly what I said. Mariah is one of my dearest friends and I would never, ever, ever have voted for her. She could have been the worst that week and I would have never voted her out because I know how great of a queen she is and I know the type of talent she possesses. Just because she had a bad week wouldn’t shake my opinion of that. And then, I also had a deal with India, and I was going to honor that because I gave her my word. So when it came to me voting, it only left Shea as my option. There was no shade behind it. It was just me doing what I felt right in my heart to do.

It seems like, when it came time to plead your case to the other girls about why you should stay, you were a lot less aggressive than you were when you were in the bottom the first week. Why didn’t you fight harder for your spot in the competition this go-around?

You just know in your spirit where you stand. In that moment, I was just like, You know what? I’ve come and done what I came to do and I’m okay with ending my party right now.

No. I wasn’t wanting to go home or anything like that. I was just okay with what it was. For me, as a person, I think you become well with things when you are able to acknowledge that you don’t have control over everything. I did not have control over everything in that moment, but I was okay. If it was my time, it was my time. I wasn’t going to allow that to control how I felt and have regret or have worry or be anxious about it. I was at peace with whatever decisions were going to be made.

When you were getting critiques on the stage, you had a testy moment with Carson Kressley, and later, Michelle Visage pointed out that it seemed like you had an attitude. You said it wasn’t, but looking back, what do you think was going through your head?

This episode, you opened up about your past — your substance abuse problems, your two DUIs, your experiences being teased by cops when you were arrested in drag, the time you spent in jail, etc. What inspired you to open up about those experiences now?

When I spoke with Jujubee and Blair and shared with them my struggles with substance abuse, I knew that the moment was much bigger than me and I needed to tell my story in hopes to, in my darkness, share some light for someone else that may be going through the same struggles in life. Sometimes you just have to be honest. It’s a scary thing, but you just have to. Share your stories because you don’t know who it might help out there. I knew at that moment it was that time for me to open up.

Considering how big of a role stories like these play on Drag Race, what would you say was different about your All Stars stint that inspired you to tell it now? What stopped you from sharing these experiences during season 10?

The difference for me was that I was amongst family. I was amongst friends and sisters and people who I admire. I felt comfortable with opening up about my life because I felt safe with the girls there. Not that I didn’t feel safe with my season 10 sisters. It was just a different experience because I was in a room full of strangers that I was getting to know as opposed to being in a room full of people that I have known for years.

It was sweet for me because I love my sister. That is my best friend for 20 years now. First of all, to see her — because I hadn’t seen her for the duration of my filming — was just nice, to have a piece of home. And to be able to watch her perform… She’s one of my favorite performers ever, so it was just a treat. It made me feel so happy and it made my going-home experience a happy moment and not somber.

So much of All Stars is about getting the opportunity to show how much you’ve grown since your original season. What did you want to prove most while you were there?

I wanted to prove to myself that I was worthy and I wanted to prove to myself that I’m capable of much more than I thought I ever could be. Even though I have all this experience under my belt and have been in the industry for a long time, there’s still room to grow and learn. That’s what I went there for, to just grow more as a person and try to learn more about myself.

Do you think you got the chance to do that during your four episodes there?

I definitely felt like I was able to prove and show a little bit more of Mayhem. In season 10, the viewers didn’t get to see a lot of my personality. This season, I feel people who were not familiar before got to see a lot more of who Mayhem is.

Now that you’re gone from the competition, who are you rooting for?

Oh my god. Well, the pageant answer is, “I want everyone to win!” But there can only be one winner and I love Shea Couleé.

Is it weird to be rooting for her after you tried to have her eliminated?

Well, I wasn’t trying to have her eliminated. All I did was vote for her because she was the only other option. The thing is, at the end of the day, it’s a competition, so...who’s going to win? Do you want yourself to win or do you want to just give someone else the title? So yeah, I voted for her to leave, but that doesn't mean I don’t think she’s an amazing entertainer and amazing queen.