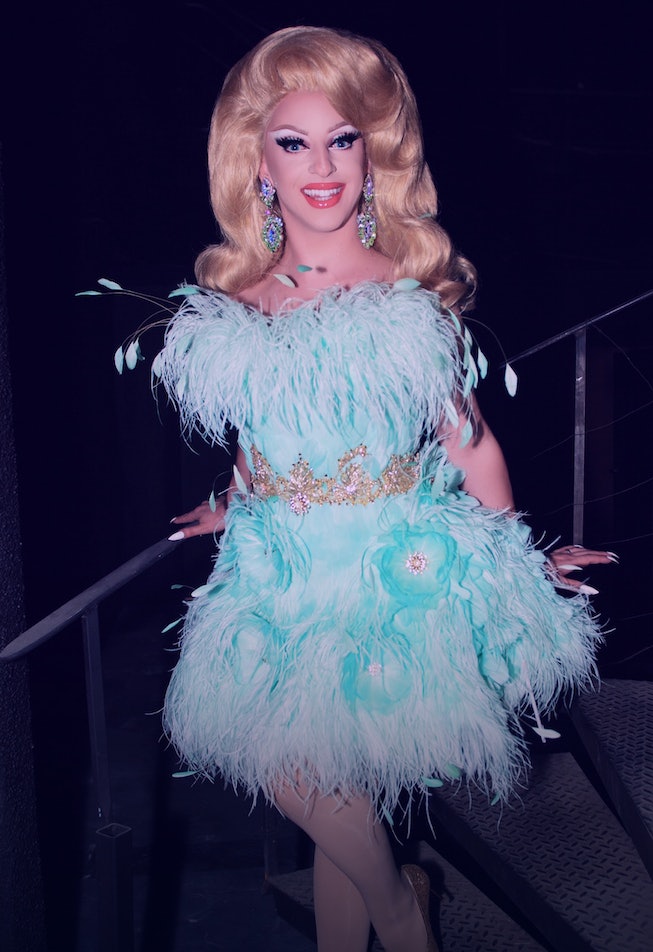 Though she didn’t make it to the finale in season 10 of RuPaul’s Drag Race, Miz Cracker did join an elite group of queens that just missed the mark by leaving in fifth place. A Seattle-born queen who is now based in New York, Cracker had big shoes to fill as the drag daughter of season 8 winner Bob the Drag Queen — and for the most part, she did just that, placing in the top multiple times and avoiding the bottom two until the very end. A quippy comedy queen with a knack for dad puns, she had everything that was needed to take it all home. But ultimately, she was done in by her inability to get out of her own head and stop overthinking her every move.

Luckily, after two years off-air, it’s clear that Miz Cracker managed to get out of her own way. While her tendency to be her own worst saboteur became her undoing the first-time around, the New York queen arrived to All Stars 5 a completely new person — one who is confident enough in her own talent to occasionally let her hair down and just have fun with the process. A consistently strong competitor, she made it to the top three with the most Maxi Challenge wins of any competitor (three, including one for the all-important ball and stand-up comedy challenges). And she did it all while staying true to herself as a proud Jewish queen.

Ahead of last week’s finale, NYLON hopped on the phone with Miz Cracker to talk about making it to the end alongside the two queens she always knew would be standing next to her, the pride she feels as a Jewish queen competing during a particularly anti-semitic era, and why she’s always viewed Drag Race as a place where she’s competing against friends.

How does it feel to have made it this far in the competition?

It feels like I’ve had a chance to show people what I can do.

When you first got the call about being on All Stars, how were you feeling? Were your bags already packed?

Yes! I’ve been telling people that RuPaul is like your bladder in your 30s — when she calls, you go.

When you first saw who you were competing against, who did you imagine being at the end with you?

I felt like Shea and Juju would be at the end with me all along — mostly because, on day one, Juju said it right to our faces. And I was like, Well, she doesn’t look like a liar!

Most queens say that if they make it to the end, they want to be facing off against their biggest competition. Do you think that’s what happened here?

Yeah. Absolutely. I feel like anyone would be honored to be in the top three with these ladies.

For this final challenge, you had to record a song and memorize a dance routine. I know you’ve talked a bit about how choreo doesn’t come naturally to you. Did having to learn it stress you out at all?

No. I mean, I actually had fun learning the choreo this time. I don’t know why. It just was kind of a blast and it seeped into my head really quickly. I think. I guess we’ll find out!

No, I learned on the set of All Stars 5. I just realized that we could all die tomorrow, so we may as well live fully today. I just told myself to let go.

Very early on, in episode two, you told Ongina that she should have gone home the first week even though she wasn’t in the bottom two. What prompted that?

Well, I try to be a very open, honest person and I try to say what’s on my mind. But I’m learning, like we all are, how to do that.

I know you and Blair St. Clair butted heads a few times during the competition, specifically because of how well you two know each other outside the competition. That’s obviously one of the unique things about All Stars, that you’re competing against friends that you’ve worked with for years now and may have a sense of loyalty towards. Did that make a difference for how you approached gameplay?

Well, I never got to know what [competing with a blank slate] was like because I had close relationships with many of the people in my original season. So I’ve always seen Drag Race as a place where I’m competing with friends.

True. As a New York queen, you had a lot of pre-established connections in season 10. Were there any differences between competing then and competing now?

There’s a huge difference because you know that every girl you’re working with on All Stars is a powerhouse and that they have a lot of love behind them. So not only has your friendship evolved, but the love that the world has for them has evolved as well.

Sometimes, the love from the outside world can manifest in horrifying ways when a fan feels like a queen they like has been wronged. What do you think about that aspect of the fandom?

I would never want another person to go through what I’ve been through and what many of my sisters have been through this season with the fandom’s reaction to the show.

So much of All Stars is about showing the world how much you’ve grown since your original stint on the show. When you came back, what did you want to show off most?

I wanted to show people that I could get out of my head and be myself.

Do you think you had the opportunity to do that?

I think that when I did my stand-up comedy challenge, I showed people that I know how to just be Cracker.

During the final critiques of this finale, you talk about watching season 10 back and realizing how many “Jewy things” you say. How does it feel to be competing as a proud Jewish queen on this show right now, during a time when anti-semitism is rampant?

Being able to show young Jewish people that it can be beautiful to be Jewish even though it’s different from other people is one of the most important parts of my drag to me. So to have a proudly Jewish queen in the top three, it means a lot — whether it’s me or somebody else.

Throughout the season, you talked about your origins as a “crafty” queen, often recalling stories about how your mom used to take you to museums as a kid and tell you to pick something you liked so you could recreate it from found materials once you got back home. Why was it important for you to share this narrative?

In an age where every drag queen is going to designers and wig-makers, I want to stand up and remind people that drag queens make things and that’s just as important to drag as being able to dance.

Speaking of, I’d love to hear more about the cone-bra leotard that you wore for the final lip-sync. At one point, you remove something and glitter sprays out. What was the inspiration for that? Were you saving this special-effects moment for the finale the entire time?

I don’t know why I wanted to have glittery smoke titties. I just really did! I don’t remember where the idea came from. I just remembered that I wanted it. The same way I was like, Oh, I want a skull to be throwing up on me in season 10, I turned to my co-pilot Caitlyn [while getting ready for All Stars] and said, “I want glitter to be coming out of my tits for the finale.”

What was your proudest moment or highest high of the competition?

My proudest moment and highest high was getting to make friends with Juju.

What was your lowest point of the competition?

Well, my lowest feeling was definitely when I found out that Shea, Mariah, and I were in the bottom for the hotel challenge — which I thought was genius! I was so surprised.

What would it have meant for you to win?

Being able to win would give me the chance to go around the world and show everyone that drag and comedy can actually make a difference and stand for my brand of drag.