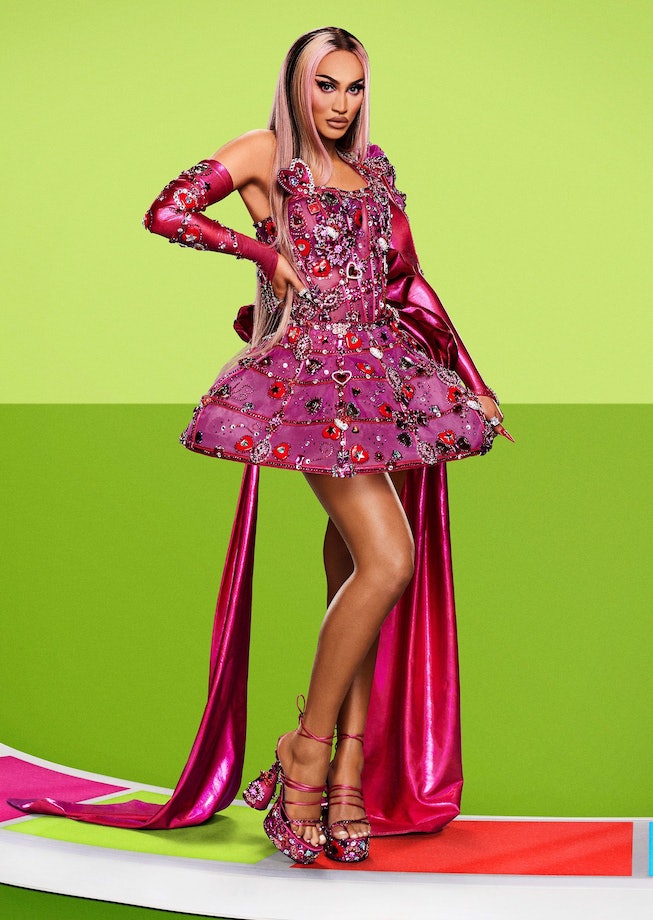 When asked to channel a specific celebrity on the Drag Race runway, what would you do? Try for an exact copy, going to painstaking lengths to replicate one of their most famous looks? Or maybe you’d be inclined to give something your own spin, flipping the bird to “duplicates” in favor of something that captures the more symbolic essence of an individual? Or, if your name is Kerri Colby, you might simply yank the clothes directly off said celebrity’s back, as the Dallas-born, Los Angeles-based queen seemed to do for this season’s “Night of 1000 JLos” runway. Delivering a true fashion moment, Kerri stormed the runway wearing an actual Versace runway piece, which was famously sported by JLo at the Italian brand’s SS20 show.

Kerri, a member of the legendary House of Colby, whose most consistent complaint from the judges was that she was always too gorgeous, delivered plenty of gags like this throughout her stint in the competition. Alas, Kerri found herself struggling in more performance-heavy challenges. Such was the case this week, when the stunner was tasked with performing in a Supremes-inspired girl-group number. Opting for a more gospel-like take on her team’s song, Kerri stood out to the judges for all the wrong reasons, and eventually landed in the bottom against Jasmine Kennedie. Though both queens tried their best in a lip-sync to Toni Braxton’s “Un-Break My Heart,” Jasmine got the upper-hand in the end, and sadly sent Kerri packing.

Ahead of her elimination, NYLON hopped on Zoom with Kerri Colby to talk about being “too churchy” in this week’s challenge, the unprecedented trans representation amongst the season 14 cast, her religious background, being a role model, how childhood trauma can sometimes lead to unshakeable confidence in adulthood, why she doesn’t believe in glass ceilings, and, of course, the real story behind that instantly-iconic JLo x Versace runway moment.

Hi, Kerri! How are you doing?

Well, we just landed in Chicago, honey, so I'm currently battling frostbite right now. But it's okay. It's a strengthening tactic!

You went home this week. What do you think went wrong that led to your elimination?

Oh my goodness. Well, maybe I was just a little too churchy for the congregation! I just think that wasn't my ministry. [laughs] That was the start of the snowball effect.

When your team was deciding how your song would sound, you specifically noted that you wanted to go in a gospel-like direction. What prompted that desire in the first place?

Growing up, I did enjoy listening to The Supremes a bit, but also — and I don't know if people are going to get this reference — there was a Christian counterpart called The Clark Sisters, and I was absolutely obsessed with them as well. So what I wanted to do was marry the two together and just make it fun. I knew that the judges were wanting to see me go out of my box and be alive, be awake, be fun and make a joyful noise, so that was what I was going for.

Relatedly, you’ve talked throughout this season about growing up in a super religious household, and in this episode, you opened up about how that strict background prevented you from interacting with certain elements of pop culture. Given how reliant drag (and especially Drag Race) can be on pop culture references, do you think having these cultural blindspots has put you at any disadvantage in the competition?

A disadvantage? No. But I do think that it gave me a learning curve. It gave me an opportunity to learn and soak in a lot of things that I may not have organically been educated to, which, to me, was fun. I also think that [my religious background] gave me the opportunity to showcase moments where I got to be “Prophetess Kerri Colby of the Congregation of Colby.” I was able to bring my church-side in and minister and share my spirit with a lot of the girls. But at the same time, I got to learn a lot — pretty much every time the judges were talking about a pop culture reference, I was like, “Who?”

This season has been unprecedented in terms of trans representation. In addition to you, there’s also Kornbread, as well as Bosco and Jasmine Kennedie, who both came out after filming began. Given Drag Race's history with trans representation, how has it been for you to not only be able to come on and compete as an openly trans performer, but also get the chance to see your sisters gain the confidence to come out as well?

Well, you know what? I'm a very firm believer in the power of Team TS. I think that, as a community, we all are collectively growing and learning and developing. With our season and last All Stars [where Kylie Sonique Love became the first trans performer to win a season of American Drag Race], we just further opened that envelope to give people inclusivity.

What I love most about our season is that we not only show you the power of our heart and the power of feminine energy and letting that flow through you, but we also really do a great job of showcasing that trans is not a trend. Those are both T words, but they're very different. Trans is not a trend. Trans is a lifestyle, trans is a person, trans is a talent. I think each one of us ladies showcased The Trans Agenda and showcased trans excellence so beautifully and uniquely. I love that we were able to go through each stage and each level of that caterpillar… I'm forgetting the word.

There we go. I’m so sorry, Maddy Morphosis, yes! [laughs]

In this week’s Untucked, Jasmine tells you that simply seeing you in the competition had a big impact on helping her come to terms with her own trans identity. I think you responded so well, telling her that you could feel her “tran-tasy” and everything. How does it feel knowing you’re an inspiration to other trans individuals?

It is so beautiful. If I can, I'd love to share a story: Everywhere I go, I get to meet a lot of beautiful angels that come up to me and tell me that just seeing me or just having me be vocal and visible means so much to them. But there was one really precious little angel when I was in New York. I was at Sephora, and I was just minding my business, getting some things for my shows. And when I was in line, I noticed [this girl] that started shaking a little bit. Now, I did not know what her [situation] was. I thought she was just a sweet little lady working at the counter. But she started shaking, and then she kept staring. So I was like, Oh my god. Did I do something wrong? Do they think I'm stealing?

But as we were checking out, she just asked me if she could give me a hug, and she started crying a little bit. And she was like, "You have no idea how powerful you representing yourself and being able to speak for us as a community and give us that open door and that platform really is, because it can be so hard out here." A lot of times, as The Girls, we feel like there's not really a voice for us because there's just so much going on, you know? She asked me for a hug and a photo, and I was emotional at being asked and treated like that because it's so surreal. It is so true that we do deserve our own superheroes, and the fact that I'm able to be that to one, two, three, however many people out there…it's very, very, very special.

This season, you opened up about being kicked out of your house when you were only 15, after spending years with a father who called you “gross” and “disgusting” because of your feminine mannerisms. How do you think that experience has impacted you? Do you feel more resilient as a result or do you still find yourself wrestling with that trauma?

Well, it's a two-part thing. It definitely gives you a lot of insecurities, a lot of anxiety, and it sets you up to have a very traumatized outlook on life. But by the same token, when you're given hills and journeys and rocks to climb, when you get to the top of that, it gives you a testimony. Not to sound too churchy, but it gives you a testimony that can really touch people. Because my story is very unique and special to me, it gave me that sense of confidence that people see.

That confidence didn't come out of nowhere. It didn't come from me flipping my hair through the hallways at school or acting a certain way to get a certain type of attention. It came from really getting tested and feeling like I lost everything, every ounce of confidence I had, and then having to break that down and find who I am. Not who I’m told I am. Not who I’m expected to be. Not who I'm appreciated to be. But who I truly am. I would never wish [my experience] on anyone. But if you do go through hard times, you always come out with some amazing triumphs.

You’ve turned out some incredible runways this season, but no single look has inspired a bigger collective gag than your “Night of 1000 JLo’s” moment, in which you wore JLo’s actual Versace piece. Can you tell me more about how you were able to procure that?

Absolutely. So in the House of Colby, my brother, August Getty, is a fashion designer. He has his own atelier collection and he loves art and clothing and a beautiful picture or two — that's where his family heirloom is. [laughs] I knew he had some very beautiful, eccentric pieces of art when it came to clothes, and I knew that he had recently acquired that JLo archive piece.

So when we got [that runway prompt], I asked him, "Oh my gosh, is there any possible way I could use this for the JLo challenge? I would die to be able to wear it." And he was like, "Well, angel, if you can fit it, then you can take it." I definitely pinched and crawled and did everything I could to fit into that dress because it definitely was not made for someone my height. But it was just so amazing once I got it on, and then so amazing once I walked down that runway with it on. Even seeing it play back [when the episode aired], I was like, "Holy crap. I am a model."

Well, your life is about to change immensely now that you've been on Drag Race. What are you most looking forward to in your new life as an official Ru-Girl?

I’m excited to see where the ceiling is because I don't believe in ceilings. I'm also excited to not only be able to use my aesthetics, but also my voice to make the world a more colorful, a more inclusive, and just a better place in general. I feel like there's a lot of negativity out there, and I'm just here to pluck some of it out and replace it with some gorgeousness.