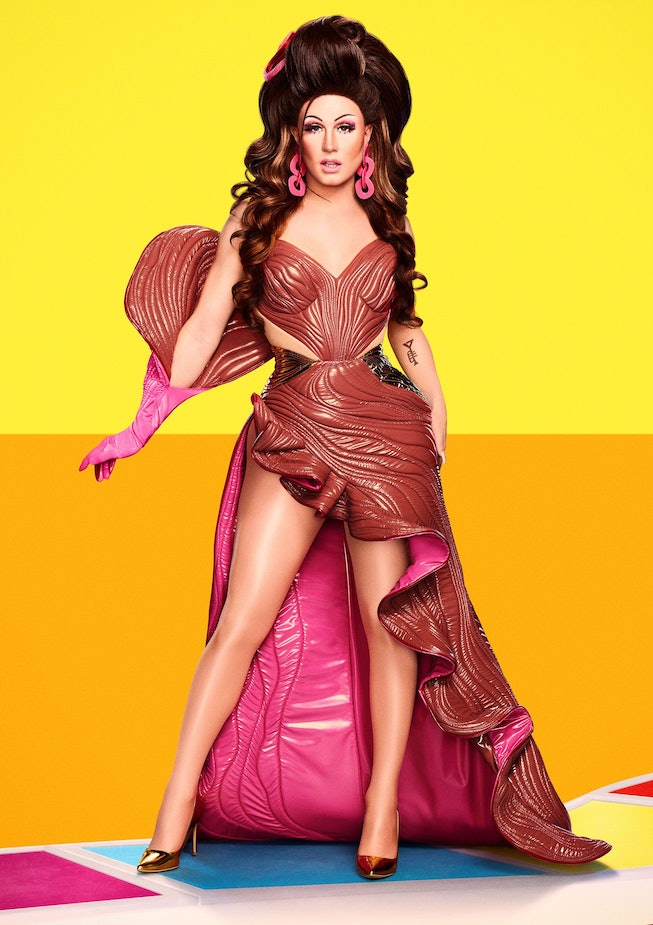 While pretty much every contestant in the her-story of RuPaul’s Drag Race would stress the importance of entering the hallowed Werk Room with a bang, not many have made the case for making your entrance with a literal screech — until now, at least. In last Friday’s season 14 premiere, 25-year-old queen Orion Story was last to make her grand entrance but wasted no time commanding the attention of everyone already there. Right before diving into a nearly unintelligible monologue about an extended warranty on RuPaul’s car, “West Michigan’s premier femmebot” walked in making a noise seemingly no one could properly identify. Was it a scream? Was she wheezing? Was it, as one contestant mentioned, a whistle tone?

Despite their collective confusion about her loud arrival, Orion’s fellow contestants were quick to praise her immaculately stoned bodysuit, which she proudly admitted she had designed herself. Unfortunately, her goodwill wouldn’t stretch far beyond that. Asked to show off a talent for the season’s first maxi challenge, Orion opted for what she has since described as an “on-the-spot improv” routine, playing a trailer park-dwelling, pill-popping aerobics instructor whose trademark move involves mimicking doggy-style sex. The set ended up feeling more awkward than funny, and unsurprisingly, she landed in the bottom alongside competitor June Jambalaya. The pair both gave their all in a neck-and-neck lip-sync to Lizzo’s “Water Me,” but ultimately, the Michigan queen’s off-kilter interpretation was no match for June’s straightforward Lizzo cosplay. In the end, Orion was sent home first — before she even got the chance to meet the other queens.

Ahead of her elimination, NYLON hopped on a Zoom call with Orion Story to talk about going home first, who she thought was going to be in the bottom with her, being the first queen to represent for Michigan, how making her audition tape taught her some new things about herself, what her talent would have been if she had adequate time to prepare, and how a stint of homelessness and substance abuse affected her mental state coming into the competition.

So, we’re now just six hours away from the grand premiere of Drag Race season 14.

I know, right? It feels like it was filmed 10 years ago.

How are you feeling now that it’s almost here?

I'm excited for the show to finally start, but I'm also like, oh, here it comes — you know?

Let's talk about that. How does it feel to get ready for a show like this and then be sent home immediately?

It doesn't feel great. But I will say, I definitely wasn’t entirely prepared for the talent show. I kind of went in knowing it might not fare well for me. They didn't give us a whole lot of time to prepare for it, so I didn't get to do what I originally wanted to do. I actually was originally recording my own song and was going to do a puppet show with it, but I didn't have enough time to get it all done because I was so busy working on my costumes and stuff. So my talent show was literally, like, on-the-spot improv. I just came up with it out of nowhere. I thought it was funny.

I know you mentioned in Untucked that you were moving at the same time you were getting ready for the show.

Yeah, I moved out of my house as I was getting ready for Drag Race. I went to Drag Race homeless, basically.

Do you think that had an impact on your mental state coming into the competition?

Absolutely. I had a lot going on when I got on the show. I was dealing with substance abuse issues and homelessness. It was all this stuff, so I came into the competition already hyper-focused on things that were going on outside of it. I really had a guard up, but I was trying to put up this confident front that was like, I'm good. I didn't want anyone to see me sweat.

For a couple seasons now, no one has gone home on the premiere episode. Was that something you were anticipating coming in? Was it a surprise to hear that there was going to be an elimination, especially since only half of you had even arrived?

Honestly, just going on Drag Race, I had no idea what to expect. I was just trying to prepare for whatever they threw at us. So when they told us we were doing a talent show, I was really like, “Oh, damn,” because like I said, we didn't have a whole lot of time to prepare. So I was like, “What am I going to do? I didn't have enough time to do what I wanted.” So I just threw it together and was hoping for the best. That's all you can really do on Drag Race: hope for the best.

I’d love to talk a bit about your entrance. First off, was that a scream you were doing? Or were you, as fellow contestant Kerri Colby suggested, trying to hit a whistle tone?

It was a screech. I screech all the time, so I just felt it'd be fitting. I thought it'd be funny because I figured everyone was going to come in so serious and have their catchphrase ready. I just wanted to come in and be stupid.

You mentioned several times throughout this episode that you wanted to show people how crazy you were. Do you think this entrance encapsulated that energy?

Yeah. I just really wanted to show everyone that I don't take myself too seriously. I wanted to have fun with it. Especially coming into the competition with everything that I had going on, I really just wanted to get my mind off of it, have fun, and make people laugh.

On the show, you mention being “the first girl representing Michigan.” How is that?

It feels great. I mean, first and foremost, I'm representing myself. Also, there have been a lot of queens before that had lived in Michigan, but they didn't live in Michigan when they got on the show, so they weren't really representing. But I'm definitely proud to be the first, and hopefully I can open up doors for a lot of other girls. There's a lot of talent in Michigan that I would love to see on the show eventually.

Also, [I love] the messages that I've been getting so far. People have been like, “Oh, you’ve made me feel like I'm not just on the backburner. I have an opportunity. I can get on [Drag Race] too if I want to.” It’s been really heartwarming to have people message me and say that I inspire them to maybe one day get on the show or do whatever they want to do, just by being the first queen from Michigan.

Obviously, going home first, you don't get a lot of time to show off your talents. What are some things you’re upset you didn’t get to show to the world before you were eliminated?

I definitely brought a lot of fun looks with me that I was sad I didn't get to show off.

Were there any challenges in particular that you were looking forward to participating in?

I was really excited for Snatch Game because that was the one [I was focused on] when I was making my audition tape. I don't really do characters. Well, I enjoy doing characters, but impersonating people is not something that I've ever really had a lot of experience in. But when I made my audition tape and made my Snatch Game, I was like, This is actually really funny. I kind of surprised myself a lot and was really happy with it.

That was one of the things that I really learned about myself through the Drag Race experience — even just through the audition process. I think it's interesting because [the producers] want so much from you in your audition tape that you really have to figure out who you are [in order to] put it in a really small video. So you really get a good understanding of who you are. You really learn about the things that you don't think you’re good at, and you might even surprise yourself. And that was one of them for me — just how funny and on the fly I could be. Before, I always thought I had a hard time thinking on my feet. So, yeah, I was excited for Snatch Game.

Speaking of things you’re good at, you made your gorgeous entrance look yourself. Do you make a lot of your own looks?

I do, yeah. I didn't make everything that I brought with me to the show, but I do make a lot of my stuff. Actually, everything — from the shoes to the hair, to my costume, all of it — was entirely made by me. I grew up really poor, and in the Midwest, there's not a lot of resources or anything. So I would go to Goodwill and buy bedsheets and stuff and sew things together and try to be crafty. You kind of have to learn how to do things on your own to get better — and if you want something done, you have to do it yourself.

I’ve always had this weird, innate need to create things all the time. I'm crafting 24/7. I do all my own hair and everything, and I take a lot of pride in that. That was one of the things that I really wanted to represent on the show, just my ability to make things and come up with concepts and ideas. That was one of the talents I really wish I could have showcased more: my creativity.

I think your creativity shined in the lip-sync. Obviously, you didn’t win this week, but if you ask me, it was neck-and-neck. You and June Jambalaya had completely different interpretations of the song, but I enjoyed how left-field yours felt. Plus, you had a wig reveal! Did you have that planned ahead of time? Or was that a last-minute decision?

Well, I didn't come into the competition planning to do that. But at the last minute, I just thought, “Well, what else can I do [to improve my chances of winning a possible lip-sync]?” So I quickly put on another wig under [mine] and was like, “If I have to lip-sync, then I'll have something.” That's the thing with Drag Race: you really have to think on your feet. Especially when you don't anticipate being in the bottom, you have to think about what you can do to get the eyes on you.

Coming off the talent show, did you anticipate being in the bottom? I know you said you felt unprepared, but earlier, you also told me that you thought your improv was funny.

In Untucked, you also mentioned that your cat was having health problems. Is he okay?

Yeah, he's okay! He's severely diabetic, so we have to give him shots every 12 hours, but he's doing really well now. We got his insulin levels all figured out. It took a while, but he's good.

Again, we are just several hours out from the premiere of your season of Drag Race. Before we wrap up, is there anything you’re hoping will happen after you’ve made your television debut?

I'm definitely excited. Reality TV has always been one of the things I've wanted to do. And after being on the show, I definitely think it's something that I would love to continue to do — whether that be coming back for All Stars to get my crown or maybe doing a different reality show. I don't know. I don't really want to limit myself to anything. I would love to see what else I can do, what doors open for me, and try to, I guess, expand my brand and put myself out there more.