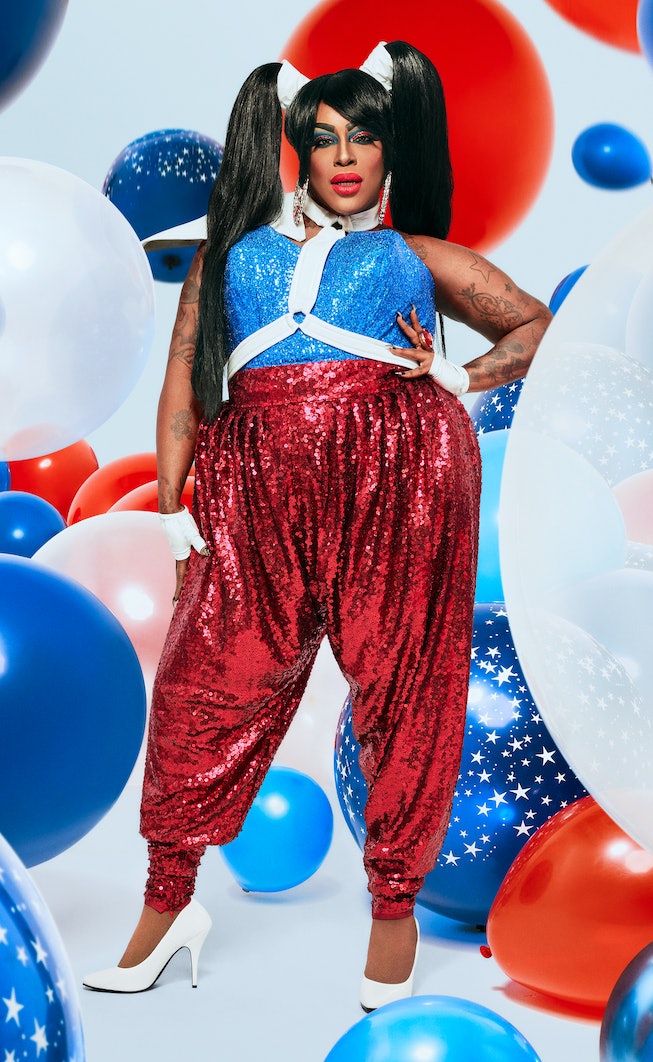 Every week, NYLON writer Michael Cuby will conduct an exit interview with the queen eliminated from RuPaul's Drag Race Season 12. This week, Kansas City queen Widow Von'Du was asked to sashay away.

After dominating a rap performance that had Nicki Minaj “screaming,” Widow Von’Du became the very first queen to win a main challenge on RuPaul’s Drag Race season 12. Add in a gravity-defying, back-bending, almost scarily flexible lip-sync for a cash prize to the Queen of Rap’s “Starships,” and it was made immediately clear that this Kansas City, Missouri queen was a real force to be reckoned with. Vivacious, confident, and undeniably funny, she was one of the earliest frontrunners. But as week after week went by, with Widow landing in the middle every time and never again touching the top, the cracks really started to show.

It all came to a head two weeks ago when, during a Werk Room walkthrough, RuPaul pointed out that it had been quite some time since Widow last landed in the top. Though she hadn’t been in the bottom either (unlike some other queens), on this show, being consistently safe is sometimes just as bad. So Widow vowed to change that, especially after finding out that her idol Chaka Khan would be the week’s guest judge. Unfortunately, she landed in the bottom, where she was forced to fight for her life in front of someone she’s looked up to for years. She won, supposedly invigorated by her opportunity to slay the stage for her hero, but last week, she quickly found out otherwise. Choosing to portray an ill-informed angry politician for the Choices 2020 debate challenge, Widow failed to make the judges laugh, and when all was said and done, she found herself in the bottom for the second week in a row. It was obvious before the lip-sync had even started that these back-to-back negative critiques had gotten to her. So when Jackie Cox landed next to her, clearly ready for war, it was a foregone conclusion that this was probably Widow’s week to go home. After giving her best in a lip-sync to Katy Perry’s “Firework,” she failed to crackle with Jackie’s inner-spark, and she was sent packing.

Ahead of last week’s episode, NYLON hopped on the phone with Widow Von’Du to talk about how it felt to perform in front of her idols Chaka Khan and Nicki Minaj, why she thinks she should have been in the top for both “Gay’s Anatomy” and the Madonna Rusical, and what it has meant to her to represent for people that are “round, Black, and gay.”

What do you think went wrong this week?

Well, I got into my head and I just couldn’t get out. Ru saying I hadn’t touched the top in a while and all the girls saying I should be up for elimination, you know, it got to me.

You were in a pretty bad space last week after not doing well in front of Chaka Khan. Did you find it hard to shake that? Did you carry that into this week’s challenge?

I really felt like performing in front of Chaka Khan and getting that save, I was like, alright, you got your spirit back. You got to do something you’re good at and now you should be back to at least 95%. But apparently, my dial was broken. I wasn’t at 95.

There was the moment when Raven was going around to all the queens and she ended up calling you out on the “biscuit basket” heels you regularly wear on stage. You told her that you wear them so you’re ready to lip-sync at all times, but she said that dressing as if you’re going to be in the bottom is basically setting yourself up for failure.

I mean, I always feel that it’s better to be prepared than to be up shit’s creek without a paddle. And guess what? I wore different shoes [this week] and felt like I couldn’t move.

That is the great irony! In this week’s debate, you decided you wanted to portray an angry politician. Going into it, did you think this was going to be a funny performance?

During the performance, did you feel like your humor was translating? Were you surprised when the judges told you they were waiting for the jokes?

In Untucked, you talked about how you had spent 13 years preparing for this moment and now that you weren’t performing up to par, you felt like it might have all been a waste. Why do you think what you were doing wasn’t translating to the judges?

Obviously, being safe is not the same as being in the bottom. But there’s still definitely a frustration that comes from being safe — especially when you have Ru coming around pointing out that you haven’t been in the top lately. How does it feel to give your all, feel like you’re slaying, but only end up safe, week after week?

It literally feels like someone is kicking you square in the balls and all you’re doing is standing there and letting it happen.

Last week, Ru asked who should go home and everyone except you said that it should be you. When you feel like you’re a strong competitor, how does it feel to know that your fellow contestants don’t feel the same?

It’s hard. It’s literally a complete mindfuck. It makes you think, well, have you shown everything that you can show? Is this literally it? And if that’s all, well, maybe this wasn’t it. At least that night.

At least you had that incredibly special moment with your idol Chaka Khan. Considering how down on yourself you were in that moment, how did you feel getting those very inspiring words of encouragement from someone you’ve looked up to for years?

Is that something you could have ever imagined being able to do in your career?

No. I never thought I would ever be performing in front of Chaka Khan to one of her songs. But Drag Race gave it to me! And, you know, same thing with Nicki Minaj! I got to perform in front of two artists that I admire and look up to — in front of them, to their songs, on the biggest stage in the world.

I want to talk about the differences between all three of the lip-syncs you did, but comparing Nicki Minaj and Chaka Khan is a good start since your Nicki lip-sync was for a cash prize because you were in the top, and your Chaka lip-sync was life-or-death.

Well, quite honestly, there wasn’t really a difference for me. In that moment with Nicki Minaj, we didn’t know that nobody was going home and I was already in fight mode. So when I didn’t get called to go to the back, I didn’t know that I was one of the tops of the week. So I was like, well, bitch, if this is the first lip-sync of the season, then goodbye, Gigi!

This week was your second week in a row being in the bottom, and during critiques, it seemed like you had already given up. How did you go from this queen that had prepared 13 years for this competition to someone who was just ready to throw in the towel?

It was just talking to the judges, and not hearing anything about if I’m doing well, and knowing that being safe isn’t good. If you’re not first, you’re last — that’s my mindset going into competitions. And not hearing anything, going from being great to being just alright to being not well at all...that was hard. It does wear on you.

Do you agree with the other queens that you had a tendency to pull away from the group when something wasn’t going your way rather than leaning on them for support?

I mean, I’m not one to cry on other people’s shoulders, especially people I don’t know. You never know where this is going to go after this, and now you have to lean on a bunch of people that you don’t really know?

You’ve talked a lot about what it was like for you to grow up as a gay Black man in a small, conservative area like Kansas City. Getting to Drag Race, the biggest stage for drag, is an accomplishment, but you also have to build up a reputation before you can get here. As a gay Black man, what was your experience like trying to build that reputation, and how do you think that prepared you for this moment on Drag Race?

No matter what, being huge, Black, and gay, I’m already looked down upon before people even know who I am. Before this season even started, they announced the cast and people were already downgrading me before I even stepped on the stage or opened my mouth. That’s how it was when I started in Kansas City. I was round, Black, gay, and no one wanted to give me a chance until one person saw me dancing at a nightclub and offered me a job. If someone takes a chance on me, I’m going to run with it, and she took a chance on me, and I ran with it. So I think it prepared me to go on Drag Race because I already was like, “I don’t give a damn about what anybody else is saying, personally.” I got a lot of hate-mail and other things because I sent Jan home and I’m like, I laugh at the bullshit you send me. I’m not like the other girls. It’s not going to get me down. I laugh at it. I’m going to wear it on an outfit one of these days!

Going off that, do you feel proud about what you’ve been able to show off, as a big Black queen from a small town?

I wanted to show other people that were round, that don’t have the quote-unquote perfect body and all that bullshit, that you can go out there and do it. You can be anything. And you don’t always have to be covered up to do it. As long as someone got inspired — and I’ve gotten a lot of messages from a lot of different people that I never would have expected because I enjoy the skin that I’m in — then I’ve done my job.