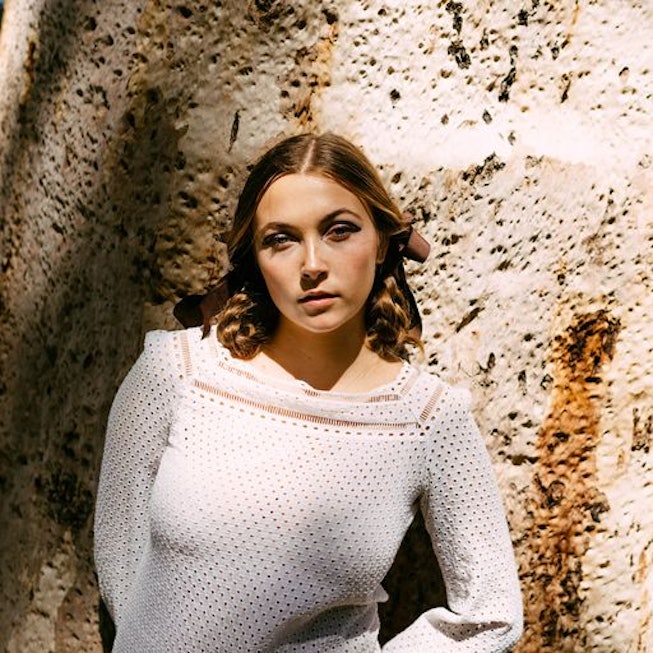 There’s something about loneliness that always brings out our inner romantic. It’s the strict isolation of a group of girls that piques the interest of teen boys in The Virgin Suicides; and there’s perhaps not a more universal adolescent experience than that of performing solitude in the back of a moving car.

On Ryann Barnes’ delicate song “Floating Balloon,” the video for which NYLON premieres below, the notion of solitude and finding one adrift from the crowd is also cast in a dreamy, mesmerizing light. Over a misty but bright piano melody, the 17-year-old Menlo Park-based musician adeptly sings about the complicated push-and-pull of embracing that feeling; loneliness, of course, doesn’t mean you never have desires to be close to someone else. Or, as Barnes sweetly expresses, “I'm done being lonely, and only your type/ I wanna be lonely and someone you like.” With her crystalline voice, it’s not hard to imagine the song closing out a YA bildungsroman movie.

“One afternoon in July I saw a floating balloon in my backyard. There was something very mesmerizing about the isolation and distance that a balloon has alone in an open sky,” writes Barnes of the song. “I felt it represented the way I tend to self-isolate and observe my surroundings when I feel uninvited or overwhelmed. I don’t like to choose favorites, but this song is still relevant for me. The baritone guitar really added to the track and gave it just the right amount of angst that comes with feeling inside yourself.”

She worked closely Paige Stark, the lead singer of LA act, Tashaki Miyaki, on both the track and its accompanying video. Directed by Stark and shot on Super 8 film, it sees Barnes elegantly floating through LA alone, spinning in the trees, laying on the grass, or crying in her bathtub.

“We both love nostalgia and soft imagery like Sofia Coppola's film work and stuff like Picnic at Hanging Rock and A Swedish Love story so we just branched out from there,” writes Stark of the visual. “She has a contagious positive energy and is an excellent musician and singer which made recording easy and fun.”

“Floating Balloon” is off of Barnes’ forthcoming debut EP, Hearing Loss, which she will self-release on October 28. Watch the video below, and read on to learn more about budding singer and songwriter.

Right now I am in my last year of high school planning for what's to come next. We are living in my house as it is in construction which has allowed the family piano to be in my room which is really great for privacy in writing songs. I am getting ready to release new music which is really exciting. Still writing about all the weird life realizations I’m having my last year at home. I am really excited to move out and be uncomfortable because that means all the more inspiration. Speaking of new things, I just started a job last night as a hostess. It was a Saturday night so it was a little hectic. Right this moment I hear the laundry machine next to my room, I just put down the guitar to step back from this song I am writing about flying kites (which I’ve never done before — fly kites), and I am going to see the new Elvis movie with my mom in a minute. I unfortunately have to also make time today to do my psychology homework, but that can come later.

How did you begin writing music?

I grew up singing to Kelly Clarkson and Britney Spears on the radio on the way to school, and to my CD player around the house. My dad got tired of hearing the same cover songs over and over, and told me to try writing my own songs to sing because "people prefer to hear about me and my imagination." The first notebook I wrote songs in was this sequined notebook with a blue fluffy pen. The way I would write was by videotaping myself on my iPod singing and then replaying the video and copying down what I sang. It was exactly how I sang it, which allowed me to speak carefree from my subconscious. Over time, I learned to play instruments. That was when writing became a more filtered process. My dad still hears all my songs first, before anyone else.

I love the softness of the music video for “Floating Balloon.” Do you have a favorite scene or moment from the shoot?

Filming the music video for “Floating Balloon” was one of the most fun experiences I’ve had so far making the music for my upcoming EP. I had never worked on video outside of just me and my mom behind the camera. Working with Paige Stark on this felt so right since she was also a part of producing the song and we shared the same vision. My favorite shot in the video comes from the park setting when it's a far away shot of me laying on my back and then switches to a close up shot above me. I love how that represents a feeling of distance but then you come closer to see me better. Another favorite moment of shooting was the last look in the black and white dress. It was this beautiful dress Paige had thrifted that I was already so excited to wear seeing it on the hanger. It was really hot that day in LA and by the end we wanted ice cream so I actually went into the ice cream store in that very dramatic gown, but it honestly felt awesome. We ended up putting that shot in the video because the whole thing in itself was an extension of the song's feel.

What’s the last album you listened to in full, and what did you like about it?

The last album I listened to in full was Sabrina Carpenter's new album, emails i can’t send. I love the lyricism in songs like “How Many Things” and “Skinny Dipping” because they’re actually funny at times. Like the lyric, “You used a fork once, turns out forks are fucking everywhere” is so true but no one says it outside of conversation with friends. I also love Julia Micheals and JP Saxe as songwriters and their touch appears in many of the songs as co-writers. The way the album flows is really fun and the songs are so different from each other that there’s something for everyone to connect to. I remember listening to “How Many Things” for the first time and before then I hadn’t had a moment listening to a song in a long time where I felt like time went still and something was being said for me that I needed, too. It’s albums like this that inspire me to make lyrical choices that are also reflections of my personality.

NEXT UP
Culture
Kareem Rahma Survives A Dinner Party From Hell In “Really Rich Parents” Video
Entertainment
Beyoncé Is Now The Most Awarded Artist In Grammy History
Entertainment
Harry Styles' "As It Was" Grammy Performance Featured A Silver Tinsel Onesie
Entertainment
Taylor Swift Sparkled In Midnight Blue On The 2023 Grammys Red Carpet
Style + Culture, delivered straight to your inbox.